Welcome to my stop on the Excerpt Tour, presented by Goddess Fish Promotions, for Trouble Cove by Nancy Lindley-Gauthier.  Please leave a comment or question for Nancy to let her know you stopped by.  You may enter her tour wide giveaway, where one (1) randomly chosen commenter will each be awarded a $10 Amazon/BN GC, by filling out the Rafflecopter form below.  You may follow all of the stops on the tour by clicking on the banner above.  The more stops you visit, the better your odds of winning.  Good Luck! 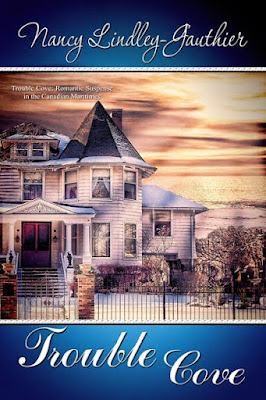 Far from the all the action of World War I, in a charming tourist’s spot on Cape Breton Island, Elizabeth Eames has stumbled into the most wonderful man in the world. She’s landed herself in a world where wealth reigns supreme; where any eligible bachelor would meet her mother’s highest aspirations. Of course, Elizabeth is dead set on the one she’s certain should not be mentioned in letters home.

Actually, there’s a lot she’s not mentioning. Something is not-quite-right at the grand resort Oceanside, but Elizabeth isn’t giving up her job on the basis of a few little suspicions. How likely could some monstrous crime be happening under her nose, anyway?

My impulsiveness was completely to blame for my current circumstances. My sister Sophia and I had taken on what we thought were heavy seas the year we won the ladies sailing race at Mrs. Pritchard’s school. They were nothing compared to this. Cape Breton Island’s coast wasn’t littered with shipwrecks for no reason. I had never before met the wind full-gale nor been so far from shore. 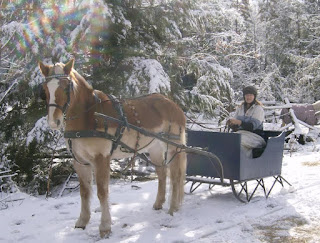 “Born in the sight of water,” are old lyrics that speak for me: For those of us from coastal towns, the sea forever calls.

“Trouble Cove,” features a journey up the eastern coast of Cape Breton Island – Nova Scotia’s northern tip – and the sea, in this, is more than the most romantic of backdrops. Wind and wave become part of the tale.

Like so many who have once visited Nova Scotia, the memory of iits rugged beauty fills me with an endless desire to return.  Likewise, the island’s siren song entwines the plot, throughout; Trouble Cove.

A native New Englander, Nancy Lindley-Gauthier resides in New Hampshire. Her interests include horses, boating, and being a back-seat driver on Hubbie Kent's motorcycle.

Some of her favorite reading includes the old Trixie Belden mysteries, and the wonderful horse books of Dorothy Lyons and Marguarite Henry.

Adventures and friendship make up some of her favorite reads; and these days, she tries to combine fun with concern for the environment in her own writings.

a Rafflecopter giveaway
Posted by Maria at Tuesday, May 16, 2017