Welcome to my stop on the Book Blast, presented by Goddess Fish Promotions, for Solo by Lauren E. Rico.  Please leave a comment or question for Lauren to let her know you stopped by.  You may enter her tour wide giveaway, where one (1) randomly chosen commenter will be awarded a $25 Amazon or B/N GC, by filling out the Rafflecopter form below.  You may follow all of the stops on the tour by clicking on the banner above.  The more stops you visit, the better your odds of winning.  Good Luck! 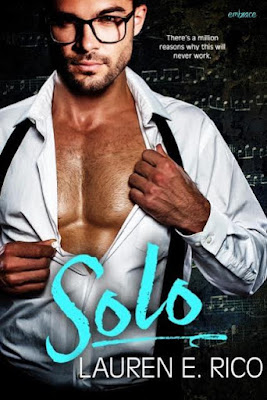 When graduate student Katherine Brenner walked into my class, I couldn’t stand her—all perfect skin and big, blue eyes—just like the woman who broke my heart.

If it wasn’t for that blizzard, if her car hadn’t broken down outside my house, if she hadn’t looked amazing by the firelight, I never would have kissed her. No matter how hard I try, every excuse I make not to see her comes up flat.

I can’t stop thinking of her lips. Or the way her curves fit perfectly in my hands. There’s a million reasons why this won’t work. I’m her professor. It’s against university policy.

And if this gets out, I could lose everything.

I’m melting into him. For the first time, I’m not fighting against Drew Markham. I’m moving toward him, with him. It happens slowly for the first few seconds as we’re hesitant in our actions and unsure of one another’s intentions. But somewhere within those inches we both draw the same conclusion. I lurch toward him and he catches me in his arms, both of us falling backward onto the couch. Our lips connect with a ferocity that is jarring.

My hands are under his shirt, feeling the smooth plane of his back, absorbing his warmth through my skin. We’re both gasping and panting, pushing and pulling. And then he stops. I nearly fall off the couch when I no longer have the resistance of his body to push against. I pull back and look up at him, confused.

His eyes are closed and he’s shaking his head. His face is a mask of regret.

He gestures toward the four empty bottles of wine on the coffee table. “We’ve both had way too much. You’re still not a hundred percent well. I’m your professor. You’re my student. There are a million different reasons why we need to stop this. Why I need to stop this. Right now. Right. Now.”

I take a deep breath and extricate myself from what’s left of his embrace.

“I don’t know where that came from,” he’s muttering, more to himself, than to me. “What’s wrong with me? I know better.”

With a sigh, I wonder the same thing about myself. We hate one another. Don’t we? Apparently not. But even I, with my limited knowledge of psychology, recognize that there’s a very fine line between love and hate. Not that I love him or anything. But I certainly wouldn’t mind another one of those kisses. 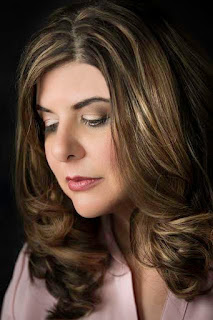 Lauren was, however, an exceptionally good classical music radio host. Calling herself a "Classical Music Reanimator," she has made a career of demystify classical music for her audiences by taking it off a dusty old pedestal and putting it into a modern context.

It's only been over the last couple of years that Lauren has discovered a passion for writing, which she's managed to combine with her love and knowledge of the classical music world.

You can hear Lauren Rico on SiriusXM's Symphony Hall Channel; on WQXR and WSHU-FM in the New York City metro; WSMR in Tampa/Sarasota, FL; WDAV in Charlotte, NC and KMFA in Austin, TX

a Rafflecopter giveaway
Posted by Maria at Monday, May 08, 2017