Blurb Blitz & #Giveaway for Honor Before Heart by Heather McCorkle

Welcome to my stop on the Blurb Blitz Tour, presented by Goddess Fish Promotions, for Honor Before Heart by Heather McCorkle.  Please leave a comment or question for Heather to let her know you stopped by.  You may enter her tour wide giveaway, where one (1) randomly chosen commenter will be awarded a digital copy of her book, by filling out the Rafflecopter form below.  You may follow all of the stops on the tour by clicking on the banner above, the more stops you visit, the better your odds of winning.  Good Luck! 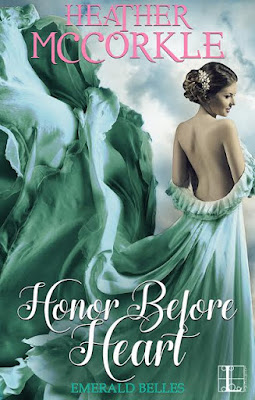 When Corporal Sean MacBranian awakens after being injured in battle, he is sure the luck o’ the Irish has run out on him. Or that he’s died and gone to Heaven. There can be no other explanation for the blond-haired, blue-eyed angel standing before him. But his “angel” is a truehearted lass named Ashlinn, and she wears a nurse’s uniform. Her tender ministrations have brought him back from the brink of death—and have given him a new reason for living.

Ashlinn knows their parting is inevitable; her handsome hero must return to the 69th infantry of the Union army, and there are no guarantees of his safe return. With most of her family already destroyed by the war ravaging America, she is sure she cannot survive another loss. Yet she feels powerless against the draw of Sean’s strong and steady heart. Neither time nor distance nor the danger of battle seems to lessen their bond. But when their secret letters are intercepted, the devoted nurse’s love will face the ultimate test . . .

The click of a rifle hammer locking back froze Sean in mid-stride. From out of the brush, not five feet away stepped a soldier in a filthy gray uniform. Blood stained his left arm. His gap-toothed sneer inspired more contempt in Sean than it did fear. The end of the rifle barrel pointed at him was another matter altogether.

“Two fer one, must be my lucky day,” the man said.

A low rumble like a distant train, only far more menacing, sounded from the dog beside Sean. Canine eyes filled with deadly intent fixed upon the Confederate soldier as her lips curled back from long, pointed teeth. The barrel of the gun swung from Sean to the dog. Overwhelmed by a powerful need to protect not only a creature his people treasured, but an innocent, he lunged for the gun with his saber. The explosion of the bullet exiting the barrel of his enemy’s rifle reverberated through his saber and up into his arm. Followed by a trail of smoke, the Minie ball tore off through the brush, thankfully far wide of both Sean and the hound.

“Damn Yank!” the soldier cursed as he swung his rifle back toward Sean. Sunlight shone in a bright line upon the bayonet fixed to the end of the rifle that thrust at him. Sean blocked the strike with his saber. Arms shaking from exhaustion, he shoved the bayonet away and stepped back.

“Your regiment is defeated this day. Retreat and be done with it. There’s no need for more bloodshed,” he said.

Snorting laughter erupted from the soldier. “Not a chance, Yank. I’ll kill that hellhound if it’s the last thing I do.”

Brows pulling together, Sean shook his head. How anyone could stand amid so much death and wish for more, especially when it involved an innocent creature, he simply could not understand. But then, he expected no better from a man who fought to keep others as slaves. Men such as him were what kept Sean fighting when all seemed hopeless. Freedom was worth the cost, even if it wasn’t his own and even if it cost his own life.

The Rebel soldier’s eyes flicked to the dog and back again. His lip curled up from yellowed teeth, muscles tensing. Keeping his attention locked on the man’s eyes, Sean noticed his gaze skitter to his midsection.

Sean blocked the strike to his abdomen but he didn’t see the Bowie knife coming at him until it was almost too late. Bringing his left arm forward, he tried to block the second strike. Breath stolen away by the pain that seared through his left bicep, he staggered back. Dark eyes filled with a terrible satisfaction, the soldier pulled his blade free of Sean’s skin and came at him again. Sean blocked the thrusting bayonet and sidestepped the Bowie knife. The man growled in frustration. 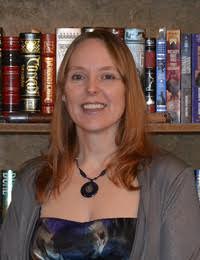 Heather McCorkle is an award-winning author of paranormal, steampunk, and historical fiction. When she is not writing, editing, or designing book covers and websites, she can be found on the slopes, the hiking trails, or on horseback. As a native Oregonian, she enjoy the outdoors nearly as much as the worlds she creates on the pages. No need to travel to the Great Northwest though; connect to her instead on her blog and her many social networking sites. You can also find her the first Monday night of every month at 6:00 pm Pacific Time on the #WritersRoad chat on Twitter, which she co-created and moderates. Entertaining readers and uncovering stories and points of view that haven't been covered are two of her greatest passions.

a Rafflecopter giveaway
Posted by Maria at Friday, May 12, 2017