Welcome to my stop on the ExcerptTour, presented by Goddess Fish Promotions, for Annie’s Recipe by Lisa Jones Baker.  Please leave a comment or question for Lisa to let her know you stopped by.  You may enter her tour wide giveaway, where one (1) randomly chosen commenter will be awarded a $50 Amazon/BN GC, by filling out the Rafflecopter form below.  You may follow all of the stops on the tour by clicking on the banner above, the more stops you visit, the better your odds of winning.  Good Luck! 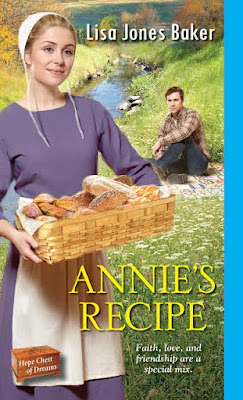 Annie Mast and Levi Miller were childhood best friends until his father was shunned. Now, 10 years later, Levi returns to Arthur, Il, and he and Annie discover their bond is as strong as ever. Soon they begin imagining a future together, but that's unlikely to happen. Levi is part of the English world, and Annie is Amish. But together, with love on their side, they may just find their way to an answered prayer.

The blaze was so bright, Levi forgot it was nighttime. The cows’ loud protests echoed through the cool, wet air in the pasture. The sharp sound of glass breaking prompted Levi to look up. He wasn’t wearing protective gear. It wasn’t long before gray smoke filled the air. The heavy, deadly clouds made it difficult to see.

Firemen made their way up two ladders and aimed their yellow attack lines at the base of the fire. Spectators gathered. Levi shouted, “Stay back!” He motioned with strong hands. “Keep away!” His lungs struggled to pump air. It was difficult to breathe without compressed air over his face, but he would do whatever he could to stop the fire from taking little Jake’s house.

Despite the working crew that had assembled in a matter of minutes, the blaze continued to grow. A huge sense of urgency filled Levi’s soul as he climbed to the top of a ladder, helping to carry a heavy hose.

Water oozed onto the flames, but the fire wouldn’t die. He retraced his steps back down to the ground for an additional hose. For one blissful moment, the flames disappeared. At the same time, the spectators breathed in. An eerie silence loomed. The only sound was of water spraying. But Levi doubted the threat was over. Experience had taught him to expect a rebound fire.

Before he could start back up the ladder, an explosion broke the silence and smoke oozed in dark clouds. Screams filled the air as the crew continued spraying. Levi’s eyes burned. The heat was so intense, he looked down to make sure he hadn’t caught fire himself.

His lungs pumped hard, and it was becoming almost impossible to breathe. Time seemed to stand still as he struggled. Finally, Levi sighed in relief when the orange monster began to succumb. He and the other volunteers continued to douse the flames.

Even though a sense of relief and calm had set in, Levi still worried that the fire would reignite. Fighting a blaze involving flammable liquids was a tricky, unpredictable job. Deadly smoke now filled his lungs until he started to feel light-headed.

As he stepped away for air, a nauseating odor surrounded him. Everyone watched as wooden slabs broke free from the barn. Boards dropped from the structure, reminding Levi of a slingshot he’d had as a kid. In seconds, the rest of the building came undone. The worst nightmare had come true. Everything inside of the barn was being destroyed. Hundreds of bales of hay for the livestock.  Oats.  Barley.  Tools.  Ladders.  Gasoline and Kerosine.  .

The all-too-familiar, sickening odor of death made Levi’s stomach churn. The knot in his throat nearly choked him, but he swallowed it and squared his shoulders.

He glimpsed Jake running toward him as a sudden, enormous crack prompted everyone to look up. A huge piece of the barn flew like an arrow in the direction of the little boy. In a heartbeat, Levi jumped toward Jake, shoved him out of the way, and took the hit on the back of his head. His world went black. 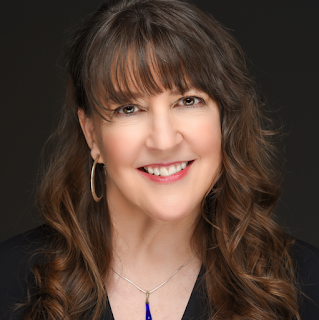 Lisa Jones Baker is a multi-published author with Kensington Books.  Her debut book of THE HOPE CHEST OF DREAMS series, REBECCA’S BOUQUET, won a Publishers Weekly starred review.  A former teacher with a BA degree in French education, Lisa has been on 5 out of 7 continents, is a dog lover, enjoys positive thinkers , volunteering in her church’s food pantry, and strong female characters.

You can find her on

a Rafflecopter giveaway
Posted by Maria at Friday, April 14, 2017