Virtual Tour & #Giveaway for Hooked on Love by Jennie Marts

Welcome to my stop on the Virtual Tour, presented by Tasty Book Tours, for Hooked on Love by Jennie Marts.  Please leave a comment or question for the Jennie to let her know you stopped by.  You may enter her tour wide giveaway by filling out the Rafflecopter form below.  You may follow all of the stops on her tour by clicking on the banner above.  The more stops you visit, the better your odds of winning.  Good Luck!

Avery Oliver can see the byline now. What better way to jumpstart her journalism career than to head out into the woods with a sexy guide? It’s all very Bear Grylls, but she’ll take it, even if it means ditching her beloved designer suits and handbags.

All Sullivan Reed needs in life is a fly rod and the roar of a river. Playing guide to a hot little reporter can’t end well…until they strike a deal that’s mutually beneficial. She’ll pretend to be his girlfriend to deflect an overly flirtatious neighbor, and he’ll help her with the article. It’s a win-win.

Until it isn’t. By the time a storm strands them in his cabin, Sully’s done pretending. He wants Avery—badly—but she’s a big-city girl looking for adventure, not his simple life. So why does releasing her feel like he’s lost the perfect catch?

The distraction of her gorgeous legs almost did him in. Literally.

Sullivan Reed hit the brakes just in time to avoid a collision in front of the general store.

The curvy blonde in the red jacket didn’t even notice, her focus intent, trying to wrench her purse from the passenger seat of her car—a little foreign number with rental tags.

She was wearing some kind of short pants, not quite shorts but not really a skirt. Must be the new fashion—not that he paid attention to fashion. According to his ex, he never noticed anything.

But he noticed this woman—noticed her long legs, her too-high heels, and what the hell was up with that purse? It was practically the size of Wyoming. What could she possibly be carrying in there? He could pack for a three day trip in a grocery sack.

Not that he cared. He didn’t have time to be thinking about how high her heels were or the enormity of her handbag when he had other things to worry about. Bigger fish to fry. So to speak.

He needed to get in, grab his supplies, and get back to the shop. He’d stayed up late last night tying some new flies and wanted to get the new stock put up this afternoon so he could be out on the creek by dusk.

Early summer in the Colorado mountains was like paradise to a fly-fisherman. Plus he needed the time spent fishing tonight to mentally prepare himself for the visitor who was supposed to arrive tomorrow.

Besides, with that long blond hair and tall curvy figure, the woman in the red jacket was totally out of his league.

Not that he had a league, or even wanted to be in a league. He wasn’t even particularly interested in the game right now. He just wanted to be left alone.
Present company excluded. He reached across the seat and patted the neck of his golden retriever, Sadie.

Sadie was the only female in his life now, the only female he trusted, and that was fine with him. She hadn’t left him, didn’t yell at him to make more money, never nagged him to pick up his wet towels off the bathroom floor, and she hardly ever snored. All attributes that he valued.

The dog whined, sitting upright in the seat of his old truck, her gaze intent on the blond woman.

She stood on the sidewalk, oblivious to him and the fact he’d almost run her down, her large round sunglasses perched low on her nose as she looked over them to read the parking meter.

Sully watched her dig into her cavernous bag for change. He was no lip reader, but he was fairly certain she dropped a pretty clear F-bomb before pulling her hands out and throwing them up in disgust, apparently giving up on the effort.

He stepped out of his truck, his gaze captivated by the way her hips swayed and the swish of the breezy fabric of her shorts against her legs as she hurried into Miller’s Mercantile. He slammed the door and stepped up to the curb, stuffing his hands in the pockets of his shorts and jingling his loose change.

After dropping a quarter into his own meter, he paused in front of hers.

It would serve her right to get a ticket. “Just because this town is small doesn’t mean you can just ignore the law,” he grumbled, half to himself, half to the dog who watched him intently, and then he dropped a quarter into her meter.

Pausing, he thought about the size of her purse—she was probably pretty high maintenance and would be in there for a while.

He dropped in a second quarter. 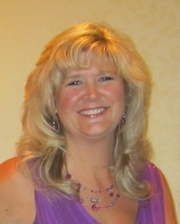 USA TODAY Best-selling author Jennie Marts loves to make readers laugh as she weaves stories filled with love, friendship, and intrigue. She writes for Entangled Publishing, and reviewers call her books “laugh out loud funny” and full of great characters that are “endearing and relatable.”

She is living her own happily ever after in the mountains of Colorado with her husband, two sons, two dogs, and a parakeet that loves to tweet to the oldies. She’s addicted to Diet Coke, adores Cheetos, and believes you can’t have too many books, shoes, or friends.

Her books include the contemporary western romance Hearts of Montana series, the romantic comedy/ cozy mysteries of The Page Turners series, the hunky hockey-playing men in the Bannister Brothers Books, and the small-town romantic comedies in the Lovestruck series of Cotton Creek Romances.

a Rafflecopter giveaway
Posted by Maria at Tuesday, October 18, 2016