Welcome to my stop on the Virtual Tour, presented by Goddess Fish Promotions, for Eye of the Pharaoh by Nancy Fraser.  Please leave a comment or question for Nancy to let her know you stopped by.  You may enter her tour wide giveaway by filling out the Rafflecopter form below.  You may follow all of the stops on the tour by clicking on the banner above, the more stops you visit, the better your odds of winning.  Good Luck!

It was a dark and stormy night...

Okay, maybe it was daytime and indoors at the fabulous Field Museum in Chicago. I’d always enjoyed movies like The Mummy (both the original and the glitzier Brendon Fraser remake) but I’d never really given the time period or culture much thought.

Then, as I strolled through their expansive exhibit, complete with simulated tomb and burial chambers, I found myself stopping at every engraved plaque, every glass-enclosed artifact. Despite what they originally held (internal organs), I fell in love with the beauty of canopic jars. I’m especially fond of the ivory bases with solid gold tops.

During the prerequisite stop in the gift shop, I bought three books, two pair of earrings, a t-shirt, and a set of miniature canopic jars (unfortunately, glass and gold plating). I was in sensory overload and knew, beyond a shadow of a doubt, I needed to write a romance and set it in Egypt.

That was in 2004. And, with no regard for my best intentions and pages of scribbled out ideas, life intervened and my big plan was put on hold. When I began writing again, I found myself waylaid by other projects, a joint series with a close friend, and new interests.

Then, in 2011, happenstance brought me back. A beloved great-aunt passed away and, in her will, she left me a gift: a necklace and a note saying that for whatever reason (she wasn’t sure), this odd piece of jewelry reminded her of me. The necklace was an Egyptian collar made up of stones, beads and gold roping—a trinket my uncle had given her when they were courting (circa late 1920s).

Since I’d never mentioned my original plan about an Egyptian-themed romance to anyone, I took the gift as a sign. This was the story I was meant to write. I dug out all the books I’d originally purchased, ordered a couple more from Amazon and even bought a textbook assigned to the local university’s course on archaeology. And, I began.

The history itself is astounding. The idea of all those people, the great chasm of differences in the classes. The difficult and often contested rights of inheritance and claims to the title of Pharaoh. As I read, I could literally picture the bright sun, the scorching heat, the thousands of slaves it took to create one pyramid.

Even more interesting (at least to a writer of steamy romance) was the promiscuity of the upper classes. One of the real-life characters mentioned in my book is Princess Neferure, daughter of Queen-Pharaoh Hatshepsut. Although there are many conflicting reports about Neferure, there are also numerous statues and depictions of her as a consort to her teacher, Senenmut, even as early as the age of eight. I use one interesting piece of research about the procreation habits of the sexuality-challenged Pharaohs in the book...a fact that both amuses and shocks my heroine.

Although Eye of the Pharaoh begins in contemporary times, it was important to me to send my characters back to 1920s Egypt when the majority of the most valuable archaeological finds occurred. Then, because it was too hard to resist, I sent my heroine, a very modern-day woman, back even further to explore the possibility she is the reincarnation of Princess Neferure.

As for my hero, Professor Joshua Cain, I stuffed his brain with so many accurate facts about ancient Egypt, he’s a walking, talking expert. And a sexy one at that!

I hope you’ve enjoyed this insight as to why I wrote a romance set in Egypt. I know I enjoyed writing this book, no matter how long it took to come to fruition. 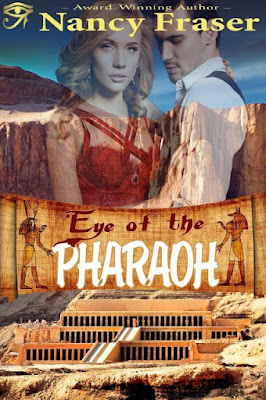 Eye of the Pharaoh

Publicist Teri Hunter has her hands full promoting Professor Joshua Cain and his new non-fiction book, The Pharaoh’s Mummy. She’s not even sure it’s possible to turn this absent-minded, modern-day, Indiana Jones into a best-selling author.

Dr. Cain’s PhDs in archeology and art history have prepared him for almost anything on the lecture circuit and among ancient ruins. He’s just not sure about a book tour...or the sexy publicist sent to monitor his every professional move.

When an odd request falls in their laps while in New Orleans, Josh and Teri find themselves transported to 1920’s Egypt where they must resolve an ancient curse in order to be sent home. Will the dangers facing them hinder their success and threaten their very lives? Or will help from an other-worldly guardian keep them on-track and safe?

Teri Hunter mouthed the motivational phrase she’d chosen for her personal mantra as she stepped across the threshold into the dark and musty storeroom.

A dim light shone from a glass-enclosed workroom in the far corner. Taking a tentative step forward, she faltered when the floorboards creaked beneath her feet. Something fast and furry brushed against her ankle. A shiver ran down her back, yet she fought the urge to retreat.

Do one thing every day that scares you.

This was obviously today’s obstacle. Were it not for her professional commitments and intricately organized schedule, she’d have no doubt bolted for the door and returned to the safety and illumination of the main building.

‘Sorry, but the storage area doesn’t have overhead lighting. Preservation of the antiquities. You understand.’ The dean’s words echoed in her head. What little outside light there was had become nearly non-existent due to an impending thunderstorm.

Drawing a deep breath, she took a second step and then a third, winding her way past a half-dozen crates, some open, some not. To her left she heard a rustling of paper; to her right the distinct sound of footsteps.

Her apprehension grew, the hair on her forearms stood at attention. She’d barely made it halfway across the room before bumping into something large and solid. Reaching out, she laid her hand against the oversized object. Slowly, she raised her head and came face to face with the painted mask of an Egyptian noble. The chipped finish gave the death mask a deranged look.

“You come here often, big boy?” A nervous giggle followed her softly-worded, albeit silly, question and she pressed her fingertips to her lips to stifle an outright laugh before lowering her hand to her side.

Silently she cursed her habit of dredging up poster-worthy quotes to mask her fears. 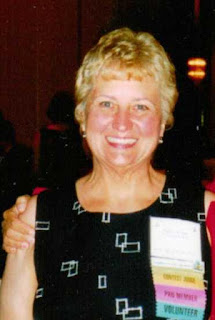 Like most authors, Nancy Fraser began writing at an early age, usually on the walls and with crayons or, heaven forbid, permanent markers. Her love of writing often made her the English teacher’s pet, which, of course, resulted in a whole lot of teasing. Still, it was worth it.

Published in multiple genres, Nancy currently writes for four publishers. She has published twenty-two books in both full-length and novella format. Nancy will release her 25th book in early 2017. She is currently working on a Valentine’s Day novella, her next Rock and Roll novella, and a story about a racy Scot titled “Kilty Pleasures”.

When not writing (which is almost never), Nancy dotes on her five wonderful grandchildren and looks forward to traveling and reading when time permits. Nancy lives in Atlantic Canada where she enjoys the relaxed pace and colorful people.

a Rafflecopter giveaway
Posted by Maria at Monday, October 31, 2016