Spotlight & #Giveaway for A Very Jaguar Christmas by Terry Spear 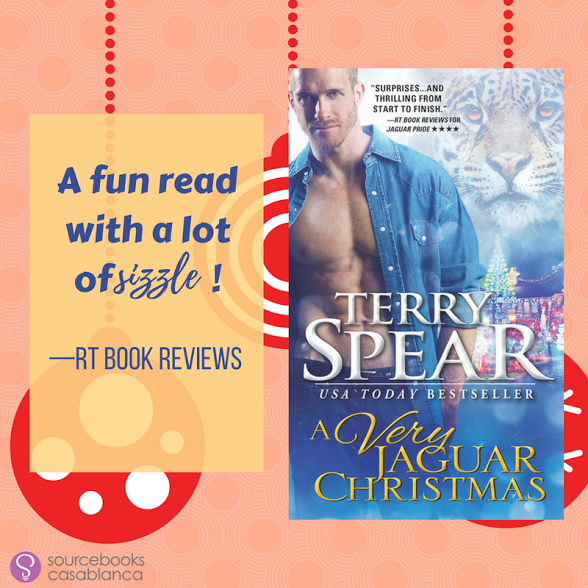 What if the shifter world as you knew it suddenly changed?
By Terry Spear

That’s what happens in A Very Jaguar Christmas. Everyone, jaguars and wolves alike, were blissfully unaware of the others. And now with one little Arctic wolf pup deposited at a jaguar shifter daycare before Christmas, both their worlds collide.

Can you imagine that? I mean, it would be like if some hunky guy you were friends with suddenly turned out to be a wolf—more than just a wolfish guy, but really a part-time wolf! So they have to deal with not just knowing that wolf shifters exist, but that they have one of their little ones, and where does that leave them?

Jaguars are not pack animals, yet the momma takes care of her babies until they’re old enough to hunt on their own. I was just watching a video about cougars, and the myth that the daddy isn’t welcome anymore might be just that. It showed the momma in a den with her babies and daddy coming to join them! So it’s possible that jaguars are the same. They’re so elusive, it’s hard to say.

In any event, the human part of the equation usually makes the shifter just as family-oriented as the wolf packs. But there are differences. They don’t have the issue of the full moon to contend with, if they’re more newly turned.

It’s not just an adult issue, either. How will the pup feel about being with a bunch of big cats? And little cats too? How will the jaguar kits feel about this alien wolf pup in their daycare? What about protective mommas?

So I’m excited about showing their worlds come together, to see how they will relate, work together, or not. They do have the shifter issue in common, so they have common ground right from the start. And that’s important. But what about territories? Each have their own territories in the wild. Will that be an issue for them as shifters?

For instance, what if a jaguar shifter moved into the town of Silver Town, one place that is totally run by a wolf pack? Would they object? How would a jaguar fit in if he or she had to run in Colorado? What if the jaguar had a mate and little jaguars?

The Victorian Inn is already prepared to handle a jaguar family with a jungle theme just for them in one of the rooms, but what if the family wants to stay and put down roots? Could they abide by wolf pack laws?

So many questions. Fun and conflict—that makes it fun for readers too!

Yep, there’s trouble in shifter paradise, and it’s Christmas on top of that. So it’s time to make some changes in the natural order of things, deal with the fallout, and make this the best Christmas ever. 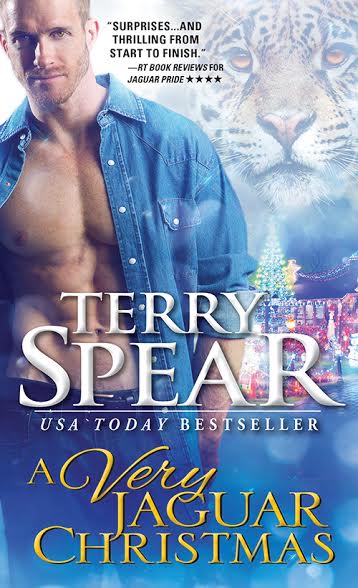 A Very Jaguar Christmas
By Terry Spear
Heart of the Jaguar, #5

There are all kinds of surprises under the mistletoe!

As a protector of all jaguar-kind, Guardian agent Demetria MacFarlane isn’t surprised to get a call near Christmas—but when she’s sent to protect a cub whose species she didn’t even know existed, her holiday season gets complicated. And it doesn’t help that her partner is a distraction of the hottest kind.

Hotshot JAG agent Everett Anderson can handle dangerous poachers and wildlife traffickers, no problem…but kids? Everett fears he’ll be stuck cub-sitting under the Christmas tree, but working with one sexy Guardian she-cat may be the best present he’s ever gotten.

What do you do when you think your boss is drinking on the job in celebration of Christmas when he gives you the most unreal mission you could think of?

Early that morning, Demetria got an emergency call from the director of the Guardian branch. She was feeling better, but she was on vacation, had had to take something for a headache this morning, and fully intended to sleep for a few more hours. It was only six in the morning!

Then her heart thumped wildly, her first thought that there was some awful development concerning Brayden.

When her boss told her the trouble he was calling about, she immediately believed Ben had gotten an early start on drinking mistletoe martinis in celebration of the holidays.

She put the call on speaker so she could get dressed. “Okay, sir, you’re telling me that the jaguar shifter daycare has an Arctic wolf shifter pup there. Really? That’s like saying they have a Bigfoot baby there. They’re trying to pull a prank on us.”

“I’m serious, Demetria. I need you to go over there immediately. You might know that a JAG agent’s mother owns and operates the daycare, so she called her son Everett Anderson to take care of it at first. Since he was working with you on Brayden Covington’s case, he called and highly recommended you handle it. The JAG agency doesn’t normally deal with guardian-type services. That’s our job.”

Mary Anderson’s daycare? Demetria couldn’t believe it. Mary was great at coming up with fantastical stories and games for the kids, but she didn’t figure her for going with a practical joke that involved a policing agency.

Demetria squinted at her reflection in the mirror. Ugh. She brushed her hair and began applying her makeup. “We don’t handle anything like that either, for anything other than jaguars. This has got to be someone’s idea of a joke. This year, the different branches pulled all kinds of pranks on each other.”

“That was on April Fool’s Day.”

“So, maybe they’re a little early for next year.”

Ignoring her comment, Ben said, “I need you to check it out and report back to me ASAP.”

“All right, sir.” This was nuts. And she hated to be the fall guy.

“Okay, but if this truly is a case of learning there’s such a thing as a wolf shifter, I’m canceling your leave and assigning you the job. This case takes priority over anything else.”

She wished she hadn’t had that third margarita last night.

She grabbed her purse and glanced at the clean kitchen, vaguely recalling that Everett had been mopping the floor before…before he carried her off to bed. Now she felt even guiltier that she’d said no to a date with him today. Was this a way for him to get even?

She headed out the door.

“All right?” Ben said, getting confirmation she was going along with the program.

“Yes, sir.” Because she knew this was all some dumb hoax. Though she couldn’t believe Everett or his mother would be trying to pull some prank on her. She just didn’t know what to think.

When Demetria arrived at the daycare, pretend frost covered the windows, making it look like a winter’s day in Dallas. Twinkling colorful lights hanging from the eves and lights in the windows gave it a real holiday look. The sign out front had two little angels holding jaguar cubs, signifying to jaguar shifters that one of their own ran the place. She didn’t imagine any human daycare would include jaguars in its motif, and she wondered what humans would think of the notion of having a wild animal as part of the branding.

Looking totally frazzled with her blond hair slipping from her bun, Mary Anderson met Demetria outside and quickly ushered her into the daycare. “Oh, oh, I’m so glad you’re here, Demetria. This is just well…just…unreal. And wonderful. And horrible.”

Demetria had never seen Everett’s mother so rattled. Well, except for the time she was helping search for the runaway preschooler. “My boss sent me to help take care of the situation. May I see the wolf shifter pup?”

“Yes, yes, this way. Everett has been watching over him. He starts crying and whimpering if we leave him alone for even a minute.”

“Wolf pack mentality,” Demetria said, as if buying into this. “Unless you mean your son.”

Mary smiled a little. “Everett will be thrilled you arrived to take the pup off his hands. He was the one who called your boss and asked for your help. He was a little worried you might not be feeling well because you were a touch under the weather last night, but he knew you were just the one to handle it. We have a serious problem here.”

Demetria hoped he hadn’t told his mother why she was a “touch under the weather” last night. “Besides the fact werewolves don’t exist?”

“We don’t know who the mother was.”

Demetria frowned at her. “You didn’t sign the child in?” Even though she knew this had to be a joke, she still couldn’t help treating it like it was a real case.

“No. Neither did Heidi Johansson, my helper,” Mary said. “The woman just dropped the child off, then left. If he had been strictly human and hadn’t told Heidi he was going to shift and then shifted, I would have called child protective services.”

Demetria did smell the wolf scent, which told her that they’d had a real wolf, or wolf-dog, here at some point.

They both reached the doorway to a room in the back of the building and looked in. Smiling, Everett crouched on the floor, playing tug-of-war with the wolf pup, the silver aluminum halo firmly entrenched between the pup’s teeth. Demetria smiled at the sight, pulled out her cell phone, and snapped a shot to send to her boss. Now this was seeing Everett in a new light. Though watching him mop the spilled margarita off her floor and clean up all the glass was something she’d never seen him do either. She had to admit she was grateful he’d cleaned up the floor, dishes, and everything.

“Oh, no, Everett,” his mother scolded. “We need those for the Christmas play.” Mary took the halo away from Everett, looking highly annoyed with him.

Everett appeared properly chastised, while the pup looked like he was disappointed his favorite toy had been taken away from him and was still eyeing it in Mary’s hand.

USA Today bestselling author Terry Spear has written over fifty paranormal and medieval Highland historical romances. In 2008 Heart of the Wolf was named a Publishers Weekly Best Book of the Year. A retired officer of the U.S. Army Reserves, Terry also creates award-winning teddy bears that have found homes all over the world and is raising two Havanese puppies. She lives in Crawford, Texas.