Welcome to my stop on the Book Blitz, presented by Xpresso Book Tours, for Confessions of An Undercover Girlfriend by Kay Marie.  Please leave a comment or question for Kay to let her know you stopped by.  You may enter her tour wide giveaway below.  Good Luck! 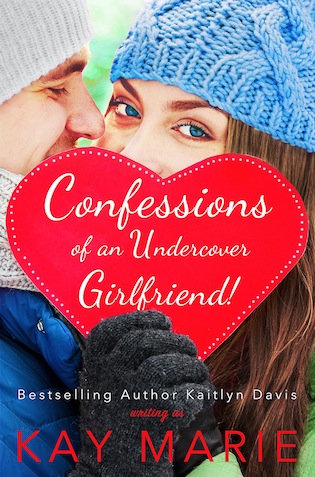 
So, I’m no longer a virgin sex columnist—thank you, Ollie—but if I thought that was going to make my life easier, boy was I wrong! John is back in town determined to win my forgiveness. Blythe is more ready than ever to take me down. Bridget is totally onto the new twinkle in my eye. And, well, Ollie is just as distractingly delicious as usual.

So, naturally, I have a few more confessions to make.

Confession #1: I came up with what I thought would be the perfect plan to keep my relationship with Ollie a secret—pretend to get back together with John!

Confession #2: It backfired. A lot.

"I absolutely couldn't put it down!" - Riddle's Reviews

Two hot guys. One big lie. What's a virgin sex columnist to do? From bestselling author Kaitlyn Davis, writing as Kay Marie, comes a new adult romantic comedy about a girl who'll soon discover that some secrets can't be kept forever, especially those of the heart.

My name is Skylar Quinn. I just moved to New York with my best friend Bridget, and I have a confession. Well, more than one. Okay, quite a few really. Fine, here goes!

Confession #1: I'm a sex columnist. Hold on, that's not really the confession. You see, I'm sort of a virgin...sex columnist.

Confession #3: I've been avoiding Oliver for four years. Or I was until today, because he just moved in. Yes, you read that correctly. He's my new roommate. So that night we've both been pretending never happened, well, we might not be able to keep it a secret any longer.

And trust me, this is only the beginning.

This is a sweet romance, perfect for fans of Sophie Kinsella, Meg Cabot, and Emily Giffin!

Buy Links:  Kindle / Paperback
*This is a KDP Select Novel - free on Kindle Unlimited or $2.99 to buy

Excerpt from Confessions of a Virgin Sex Columnist!

I haven't seen him in four years. In fact, I've actively been avoiding him for four years. And now he's here. In my kitchen. Drinking my milk—from the gallon no less! Did I mention he looks completely and utterly gorgeous? Maybe even hotter than I remembered…if that's even possible…

"Ollie?" I gasp. "What are? Why are? When?" Great reporting, Skye… I swallow, stilling my racing words and form an actual sentence. "What are you doing here?"

"Here in New York or here in your kitchen?"

Here pretending to be your sister while I confess my deepest secrets? Here looking at me with that infuriating half-smirk smile thing you do? Here pretending like the last time we saw each other wasn't the most horrifying moment in my entire life?

He puts the milk back in the fridge and closes the door. I can't help but notice a toned bicep below the sleeve of his white T-shirt—the same bicep I used to fantasize about during chemistry class, the bicep of the most popular guy in the school, the bicep of the quarterback. Six years since he stopped playing football, and crap, he still looks good.

"I'm guessing Bridget forgot to mention that I got offered a job at a new steakhouse opening on Fifth Ave? As a sous-chef?"

I shake my head. "Nope, she didn’t mention anything."

He licks his lips, biting back a wider grin. "So she probably also didn't tell you I accepted the offer and just moved to New York?"

"I don't recall ever hearing about that…" I trail off as my palms begin to sweat. I have a very, very bad idea where this is going.

Ollie's eyes brighten a shade, crystal aqua, clearer than any Caribbean water I've ever seen. He leans against the wall, crossing his arms, looking at me through a side-glance, the hint of a dimple on his cheek. My rapid heartbeat has nothing to do with my panic attack anymore.

Oh yeah, this is bad.

"So," he says, lifting his brows and looking at me apologetically, "she probably also didn't tell you that I'm moving in for a few weeks until I can find my own place?"

"You’re the new roommate?" I shout and then clamp my hands over my lips. I've said enough to him tonight—too much. In fact, all of that information is crashing back down around me.

Ollie is my new roommate. 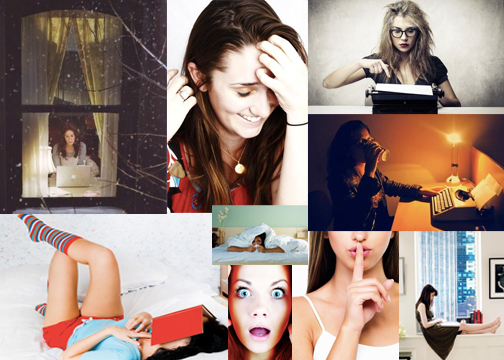 Name: Skylar Quinn – Skye to her friends, and well, anyone else who wants!

Who Is She? Skylar is the main character of Confessions of a Virgin Sex Columnist! —the story is told in her first person narration. She’s a virgin, a sex columnist, and is, well, pretty much totally anxious about the whole thing. Throw in the secret crush on her best friend’s brother, who also happens to be her new roommate, and you might understand her frequent heart palpitations

Loves: Ollie! No, wait…she used to. She still does? Well, you guys can decide because Skye and I sure can’t! Other loves include coffee, desserts, sugary things in general, reading by the windowsill while it rains, cheesy love scenes, and writing of course—especially when said writing doesn’t include fabricating sexual scenarios for her column.

Hates: High heels, hitting on guys, the never-ending embarrassing moments that seem to plague her life, lying in general (yeah, I see the irony here), and, what did I forget? Oh, right. Ollie!

Guilty Pleasures: Reality television binge watching sessions with Bridget, and, um, secretly watching Ollie flex his biceps out of the corner of her eye! 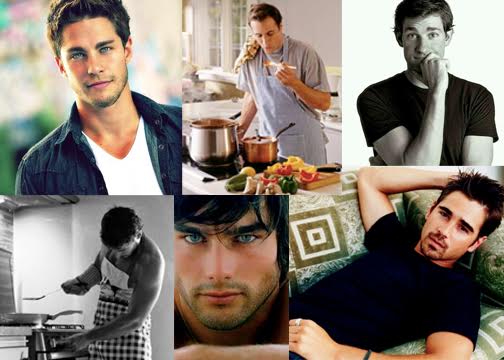 Who Is He? Hmm…where to begin? Ollie is our main character Skylar’s secret crush, her best friend Bridget’s older brother, and their new roommate. Of course, he’s also the guy who broke Skylar’s heart, but maybe wants to put it back together again…maybe.

Loves: Cooking, giving his sister a hard time, teasing Skye mercilessly, looking too handsome to be real, putting on a good brood when he has to, playing football, and using his piercing turquoise eyes to make any girl around him fall just a little bit in love.

Hates: Any guy his sister is dating, any guy Skye is dating for that matter, the chick-flicks he’s forced to endure in his new apartment, the fact that Skye hasn’t spoken to him in four years, bicyclists in New York, and overcooking fish, obviously.

Guilty Pleasures: The chick-flicks he's forced to endure in his new apartment…take that secret to your grave!

Always blessed with an overactive imagination, Kaitlyn has been writing ever since she picked up her first crayon and is overjoyed to share her work with the world. When she's not daydreaming, typing stories, or getting lost in fictional worlds, Kaitlyn can be found indulging in some puppy videos, watching a little too much television, or spending time with her family.

If you have any questions for her--about her books, about scheduling an event, or just in general--you may contact her at: KaitlynDavisBooks@gmail.com
To stay up-to-date with all of Kaitlyn's new releases, sign up for her new release newsletter here: TinyLetter.com/KaitlynDavisBooks