Welcome to my stop on the Virtual Tour, presented by Goddess Fish Promotions, for Talisman by Colleen Charles.  Please leave a comment or question for Colleen to let her know you stopped by.  You may enter her tour wide giveaway by filling out the Rafflecopter form below.  You may follow all of the stops on the tour by clicking on the banner above.  The more stops you visit, the better your odds of winning.  My review will post separately on Sunday, May 29th (delayed due to family emergency). 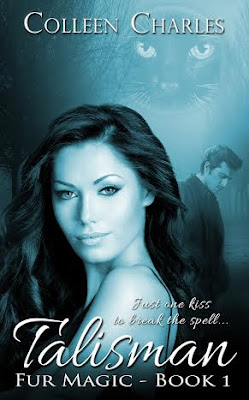 Just one kiss to break the spell...

That's all she needs.

Cursed by a jealous witch, Penelope DeLacroix's spells are all going wrong and backfiring, creating havoc in town. The vengeful witch won't quit until she has all of Penelope's powers. And all it will take is one perfect, heartfelt kiss from Penelope's one true love to put an end to all this turmoil.

The only problem? Penelope has no idea that Dr. Lucas Collier, the compassionate local veterinarian, is in love with her. Nor does he know that she's in love with him. They're both too stupid to figure it out.

And I have to do something about it.

But what can I do?

I'm only her cat.

Every witch has a cat.

And I'm going to fix this.

I trotted around the house as fast as I could and rang the doorbell before I realized I had forgotten an extremely important fact.  The most important fact of all.  When one morphs in to human form and they aren’t wearing any clothes, then they aren’t wearing any clothes.  That’s right folks.  Standing buck naked at the front door with Penelope three feet from swinging the door open and Amelia hot on her heels.  I was just going to have to go with it.  Just as Penelope flipped the dead bolt, I noticed the American flag flying proudly on the front porch.

George Washington and all our founding fathers, please forgive a desperate cat for what he’s about to do.

I ripped the flag down and off its wooden pole just in time to wrap it around my waste so Penelope wouldn’t see my, er … assets.  I’d seen them before and they were spectacular.  Poor Dr. Luke couldn’t possibly be as well-endowed as I was.  It had to be at least five inches.

“Ami,” she said as she swung the door wide.  “There’s a present on the doorstep and it’s not even Christmas.”

Ami skidded up behind her and then peered at me through the space between Pen’s arm and rib cage.

“Hmm …,” she said as her brown eyes got as wide as saucers.  “It’s a great present and its wrapping is so unique, so … patriotic.”

Pen motioned for me to step over the threshold and in to the foyer as she spoke, “I think it’s time I know your name, mystery man.  Also, what do you want with me and why do you keep appearing at the strangest times.  Almost like you know when I need you.”

As I trotted in to the living room and picked up the book of love spells, I hitched the flag up around my flanks and made sure it was secure.  I didn’t want to flash them a glimpse of my perfectly round behind.  That view would ruin Penelope for anyone else.

I opened the book and slapped it down on the engraved coffee table.  The one that Pen adored because it had been handed down for generations.  Her grandma had just presented it to her for her twenty-fifth birthday.  As I shuffled through the pages to find the one I wanted, the one at the beginning, Ami reached me and peered around me.

I pointed, hard until my finger was white from the effort of pressing against the page.  She read it over a few times and then looked at me in confusion. 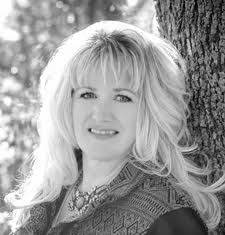 Colleen Charles is the pen name of Tami Stark, #1 Bestselling Author on Amazon.
After 26 years in Corporate leadership at a Fortune 500, I discovered people within the organization lacked integrity. I'd always known deep in my soul that I was trying to fit a square peg in to a round hole since I'm the typical creative type. I miss my staff but I don't miss the corporate world. It's been said that the Universe will let you know if something isn't right for you. The first time, it will hit you with a pebble. Then a brick. Then a boulder. Let's just say that I got flattened. When my fifteen pound toy dog, Nigel, was threatened, I knew it was time to say goodbye.

It's sad but true.

Here's what I found within the first thirty days of being free. Writing stories from my heart that readers love means more to me than working myself in to an early grave for people who only care about their bottom line.

My heart has never been more full and my soul has never been more satisfied.
I've never worked so hard in my life but it doesn't even feel like work. It's worth it. All of it. Because it's about the joy that's found within the journey. The highs and the lows because I get to write stories for all of you.

Thank you from the bottom of my heart for reading, enjoying and recommending the stories that I write. When you share my work with others, nothing is more rewarding. Your word of mouth is my very best friend ... that, and your reviews. There is nothing more important to me than all of you.

I love to hear from my readers and answer all communications personally. You can find me at: www.colleencharles.com/free
- VALUABLE STARTER PACKAGE for new subscribers

a Rafflecopter giveaway
Posted by Maria at Friday, May 27, 2016