Virtual Tour & #Giveaway for The Sixth Event by Kristen Morie-Osisek

Welcome to my stop on the Virtual Tour, presented by Bridging the Gap Promotions, for The Sixth Event by Kristen Morie Osisek.  Please leave a comment or question for Kristen to let her know you stopped by.  You may enter her tour wide giveaway by filling out the Rafflecopter below.

A lot of writers will plan out every detail of their book, make notecards or outlines, and know from the very beginning how their book will end.

I am definitely not one of those writers. I usually have an idea for a story based on a concept first—for The Sixth Event, it was the idea that the main character would travel back in time, reliving parts of her past, and have to figure out why. I actually wrote a short story a long time ago that dealt with that idea, where the main character got a chance to avoid a deadly car accident by changing the trajectory of her life. It wasn’t the best written story, but the seed of it wouldn’t leave my head.

The seed germinated, so to speak, when I realized how fun it would be to introduce a look at prehistory into a book. You’d need time travel for that, and then I decided to combine the two ideas. Hence, the overall concept for The Sixth Event was born. I wrote the first chapter that day, where Raquel dies in an apocalypse and then wakes up at home two years in the past.

Once I had the concept and the characters, the story flowed from there. That’s mostly how I write—instead of outlining every detail of the world and characters, I come up with them and let them shape the story. I don’t necessarily have muses or anything like that, but I have a sense of who the characters are, how they would react to events, and how the events would change them. Chris relies on humor to deal with his own confusion and anxiety, while Raquel, at first, wants to pretend that nothing’s changed. Both of them mature as the story goes on and they realize what they have to do to save the world.

The first version of the story ended up rather short—I wanted it to be a thriller, and it was, but I also left some characterization on the cutting room floor. After a few beta readers looked it over, I added back in that characterization. That’s how we got Susan’s conflict, and Andres’. I wanted to spend even more time with each character, but with a cast of seven, I had to stay somewhat focused.

Of course, the biggest revision was probably in the very beginning—I wanted to start the story off with a bang, but I think ending the world on the first page was a little fast.

I hope all my revisions have paid off, and readers enjoy the book! 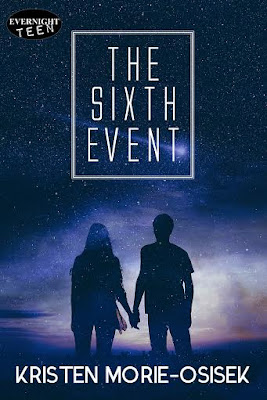 Eighteen-year-old Raquel isn't eighteen anymore...
During Raquel's first semester of college, she witnesses the end of the world, only to wake up in her old room at her parents' house two years in the past. Even worse, it seems she's the only one who remembers—until Chris Lyley, a boy Raquel always thought was a loser, tells her he remembers the catastrophe.

Before long, they both discover new abilities. They're able to understand any language and teleport through time and space.  If Raquel and Chris can figure out what caused the end of their world, maybe they can stop it.

My heart pounded as my white ceiling greeted me when I opened my eyes. I blinked frantically, the vision of the rock hitting me still fresh in my mind, the instantaneous crushing sensation throughout my body fading to a dull, residual mental ache. Fear crashed and faded in a wave of relief when it all resolved into the deep blackness of my dorm room.

That had been one hell of a dream.

I narrowed my eyes, still staring up at the ceiling. My dorm ceiling was gray, not white.

I sat up and turned to the left expecting the glaring green glow of my digital clock. Instead, I was greeted with the dim shape of a dresser, outlined in the rosy hue of a rising sun.

My pink and white dresser at my parent’s house.

Shock spread through me, sending tingles down to my toes. My bedroom was coming into view, not my dorm room.

A stuffed dog sat at the foot of my bed. Instead of the giant glass window over the football field, my lace pink curtains fluttered in a warm California breeze, a copy of Teen Vogue sitting on the sill.

I rolled over and stood, grabbing the magazine. Justin Bieber smiled at me from the October 2010 cover.

Impossible. This was impossible.

“Elsie!” I shouted my roommate’s name. The magazine hit the floor with a ruffle of pages. The plush, carpeted floor, not the hard tiles of my room at college.

My comfy bed, complete with a feather mattress, took up the same side of the room it always had. My computer desk sat at the far side of the bed, the blocky Dell PC taking up most of the space. A life sciences textbook lay next to it, the image of a tiger on the front coming into focus as my eyes adjusted to the darkness. On the floor, my giant shoulder bag from high school lay with papers strewn around it. I took a step closer, peering at the letters, my heart pounding so hard I didn’t think to turn on the light.

High school biology notes. I had taken biology in my junior year.

I fled, my door banging against the wall as I ran to the bathroom, flicking on the light.

Elsie wasn’t here. I stared into the mirror of my parent’s bathroom, at my frizzy brown hair. I didn’t look so different. A little bit shorter, a little bit ganglier. No freshmen fifteen. I still had that annoying pattern of three pimples that kept coming back on my chin.

But I was still younger. Not eighteen, not a college student.

I stared in shock. This couldn’t be true. It must still be part of the dream, part of the green sky and rocks hitting me. I blinked hard, touching my nightgown, pinching my arm until I winced with pain.

“Mom!” I shrieked so loud I thought the mirror would shatter. “Mom, Mom, Mom!”

My mother came rushing in, her robe pulled tightly around her. “Raquel, what is it?” Her hair framed her face in an unruly brown cloud, her eyes wide and face pale. “What’s wrong?” She was as scared as I was.

“What do you mean?” She pulled me out of the hug, looking into my eyes. “Raquel, what is wrong? Are you sick?”

In the glaring bathroom light, I stared into her wide eyes. She stared back at me, full of concern, full of worry for her daughter.

“The…I died. There were birds dying, and a rock hit me, and I should be in college…” I babbled, and she shook her head, gripping me tight.

“Raquel, it was a nightmare. That’s all.”

“What’s going on?” My dad’s voice shouted from the dark hallway.
“Nothing, dear,” my mother shouted back. “Raquel just had a little night terror.”

“At sixteen?” Disbelief and exhaustion edged his voice. “Go to sleep, Raquel,” he added, mumbling.

My heart pounded harder, even as I shut my mouth, looking back into the mirror.

The mirror in my parent’s house, where a sixteen-year-old me stared back. My stomach flipped, then sank into my feet.

And no one else remembered anything.

Kristen Morie-Osisek has always had a fascination with the natural world. She is an academic by trade who specializes in addiction research, but also has a healthy interest in geology and the history of the planet. She focuses on writing science fiction and fantasy. The Sixth Event is Kristen’s debut book.

a Rafflecopter giveaway
Posted by Maria at Monday, May 16, 2016