Excerpt Tour & #Giveaway for When the Serpent Bites by Nesly Clerge

Welcome to my stop on the Excerpt Tour, presented by Goddess Fish Promotions, for When the Serpent Bites by Nesly Clerge.  Please leave a comment or question for Nesly to let him know you stopped by.  You may enter his tour wide giveaway by filling out the Rafflecopter form below.  You may also follow all of the stops of his tour by clicking on the banner above.  The more stops you visit, the better your odds of winning. 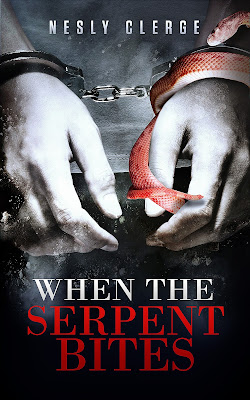 When the Serpent Bites
By Nesly Clerge
The Starks Trilogy, Book 1

About the book:
Frederick Starks has it all—a gorgeous wife who was his high school sweetheart, three beautiful children, a mansion and cars others envy, millions in the bank, respected in his community, admired by his employees, loved and respected by loyal friends. He revels in the hard-earned power and control he’s acquired. As the saying goes, “All that glitters is not gold,” which Starks discovers when gut-wrenching betrayal by his wife sends him over the edge and into a maximum security prison. There, Starks is a new “fish,” stripped of nearly everything he’s always relied on. In that place, where inmates and guards have their own rules and codes of conduct, Starks is forced to face the darker side of life, and his own darker side, especially when the betrayals, both inside and outside the prison, don’t stop. He must choose which path to follow when the line between right and wrong becomes blurred: one that leads to getting out of the physical and emotional hellhole he finds himself in or one that keeps him alive.

Demory glanced again at Starks’s file in the few minutes before his patient arrived. Police statements taken from people who knew Starks were consistent about the man never having previously demonstrated any violent tendencies. Family often lied, but not neighbors and business associates, who usually had no reason to hold back with the truth.

Kayla Starks’s statement, of course, was derogatory. And, as expected, Margaret Hessinger’s statement was scathing.

Having been through a bitter divorce himself, he knew that a person can be pushed beyond a rational point. Although he didn’t condone the action, he could sympathize with Starks for snapping the night he went to his wife’s former lover’s house. The problem was he was still snapping. In here. The last place where he could or should do that. The last place he might ever live, if he didn’t get a grip.

The inmate arrived one minute early.

Demory smiled and motioned for him to sit. Once the guards left and the door was closed, he asked, “How are you doing?”

Starks rubbed the back of his neck. “How do you think?” He rested his clasped hands on his lap and stared, unseeing, at them.

Starks looked him straight in the face and said, “You’re kidding, right?”

“You’re familiar with my trial?”

“I followed the news, and I ordered and read a copy of the trial transcript after I knew I’d be meeting with you.”

“Then you know what my wife did. Finding out what my wife really was—and that she willingly spoke against me—fucked me up bad. Everything I’d ever worked for, what it did to my kids . . .  Then coming here, being locked in isolation for so long . . . I just wanted it to stop.”

“What did you want to stop?”

“Pain, humiliation, memories that run on a loop. And feeling like I have to live in constant fear.”

“I’d like to talk about the event that led to you being in here; what happened at the Hessinger house.”

Starks’s head jerked up. “I don’t want to discuss it.” He pointed at the file in front of Demory. “Anything you need to know about that night and what happened before that night is information you’ve already read. No need for me to repeat it.”

“I’m afraid we have to discuss it. If I have to ask you each session, I will, until you tell me about it.”

After a minute of silence, Starks answered. “I lost control, went over the edge.”

“What sent you over?”

“He had no shame. Only wanted to shame me. Blame me for my wife cheating with him.”

Chains rattled when Starks swiped at the trickle of sweat on his cheek. His gaze traveled quickly around the room, his breaths became shorter. Demory waited.

Demory’s smile was sympathetic. “Time is on our side.”

“Your file indicates you’re still married but that you and your wife had been separated almost a year at that time. Why did you want to talk to Hessinger then? Why attack him then?”

Nesly Clerge received his bachelor’s degree in physiology and neurobiology at the University of Maryland, and later pursued a doctoral degree in the field of chiropractic medicine. Although his background is primarily science-based, he has finally embraced his lifelong passion for writing. Clerge’s debut novel, When the Serpent Bites, will be available in 2015, with the sequel to follow in 2016. His debut novel explores choices, consequences, and the complexities of human emotions, especially when we are placed in a less-than-desirable setting. When he is not writing, Clerge manages several multidisciplinary clinics. He enjoys reading, chess, traveling, exploring the outdoors, and spending time with his significant other and his sons.

a Rafflecopter giveaway
Posted by Maria at Wednesday, May 04, 2016