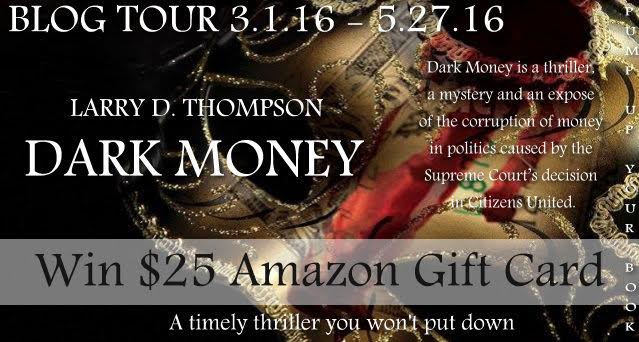 Welcome to my stop on the Virtual Tour, presented by Pump Up Your Book, for Dark Money by Larry D. Thompson.  Please leave a comment or question for Larry to let him know you stopped by.  You may enter his tour wide giveaway by filling out the Rafflecopter form below.  You may also follow all of the stops on Larry’s tour by clicking on the banner above.  The more stops you visit, the better your chances of winning. 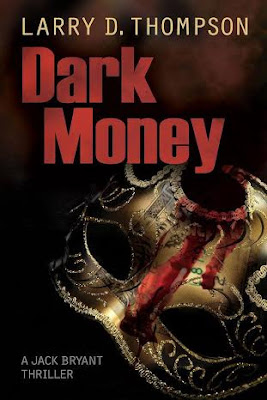 DARK MONEY is a thriller, a mystery and an expose’ of the corruption of money in politics.

Jackson Bryant, the millionaire plaintiff lawyer who turned to pro bono work in Dead Peasants, is caught up in the collision of money and politics when he receives a call from his old army buddy, Walt Frazier. Walt needs his assistance in evaluating security for Texas Governor Rob Lardner at a Halloween costume fundraiser thrown by one of the nation’s richest Republican billionaires at his mansion in Fort Worth.
Miriam Van Zandt is the best marksman among The Alamo Defenders, an anti-government militia group in West Texas. She attends the fund raiser dressed as a cat burglar---wounds the governor and murders the host’s brother, another Republican billionaire. She is shot in the leg but manages to escape.

Jack is appointed special prosecutor and must call on the Texas DPS SWAT team to track Van Zandt and attack the Alamo Defenders’ compound in a lonely part of West Texas. Van Zandt’s father, founder of the Defenders, is killed in the attack and Miriam is left in a coma. The authorities declare victory and close the case---but Jack knows better. The person behind the Halloween massacre has yet to be caught. When Walt and the protective detail are sued by the fund raiser host and the widow of the dead man, Jack follows the dark money of political contributions from the Cayman Islands to Washington to Eastern Europe, New York and New Orleans to track the real killer and absolve his friend and the Protective Detail of responsibility for the massacre.

For More Information
Dark Money is available at Amazon.
Discuss this book at PUYB Virtual Book Club at Goodreads. 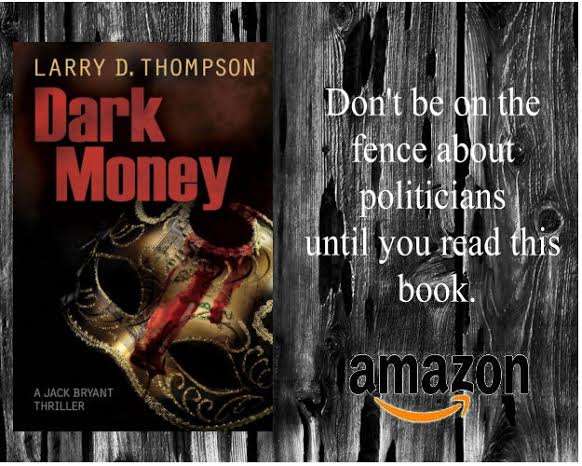 Jack Bryant turned his old red Dodge Ram pickup into the driveway of the Greek revival mansion at the end of the cul-de-sac in Westover Hills, an exclusive neighborhood in Fort Worth. He was amused to see Halloween ghosts and goblins hanging from the two enormous live oaks that fronted the house. The driveway led to wrought iron gates that permitted entry to the back. A heavy set Hispanic man with a Poncho Villa mustache in a security guard uniform stood beside the driveway near the gates, clipboard in hand. He was unarmed.

Jack stopped beside him and lowered his window. “Afternoon, officer. Fine autumn day, isn’t it?”

The guard sized up the old pick-up and the man wearing jeans and a white T-shirt. “You here to make a delivery?”

Jack reached into his left rear pocket and retrieved his wallet from which he extracted a laminated card. “No, sir. Name’s Jackson Douglas Bryant. I’m a lawyer and a Tarrant County Reserve Deputy. My friend, Walter Frazier, is part of the Governor’s Protective Detail. Said Governor Lardner is attending some big shindig here tomorrow night and asked me to lend a hand in checking the place out before he hits town. My name should be on that clipboard.”

The guard took the card, studied it closely and handed it back to Jack. He flipped to the second page. “There it is. Let me open the gates. Park down at the end of the driveway. You’ll see another wall with a gate. Walk on through and you’ll find your way to the ballroom where the party’s being held tomorrow. I’ll radio Sergeant Frazier to let him know you’re on your way.”

The gates silently opened, and Jack drove slowly to the back, admiring the house and grounds. The house had to be half a football field in length. Giant arched windows were spaced every ten feet with smaller ones above, apparently illuminating the second floor. To Jack’s right was an eight foot wall. First security issue. Not very hard to figure out a way to scale it. Fortunately, cameras and lights were mounted on fifteen foot poles that appeared to blanket the area.

Jack parked where he was directed and climbed from his truck. Before shutting the door, he took his cane from behind the driver’s seat. He flexed his left knee. It felt pretty good. He might not even need the cane. Still, he usually carried it since he never knew when he might take a step and have it buckle under him. Better to carry the cane than to fall on his ass.

He found himself in front of another wall. He was studying it when Walt came through the gate. Walt was ten years his junior, six feet, two inches of solid muscle. He bounded across the driveway to greet Jack. They first shook hands and then bear-hugged each other like the old army buddies that they were.

Walt pulled back and looked at Jack. “Damn, it’s good to see you. Been, what, about three years since you were in Austin for some lawyer meeting?”

“Could have been four. I think I was practicing in Beaumont then.”

“Still carrying the cane. That injury at the barracks causing you more problems?”

“No worse, not any better. Every once in a while the damn knee gives out with no warning. I may have to put an artificial one in some day. Meantime, the cane does just fine. I’ve got a collection of about twenty of them in an old whiskey barrel beside the back door of my house. This one is my Bubba Stick. Picked it up at a service station a while back.”

Walt’s voice dropped to just above a whisper. “Follow me into the garden. There are some tables there. We can sit for a few minutes while I explain what’s coming down.”  They walked through the gate. Beyond it was a garden, obviously tended by loving hands. Cobblestone paths wound their way through fall plantings of Yellow Copper Canyon Daises, Fall Aster, Apricot-colored Angel’s Trumpet, Mexican Marigold and the like. Walt led the way to a wrought iron table beside a fish pond with a fountain in the middle, spraying water from the mouth of a cherub’s statue. The two friends settled into chairs, facing the pond.

“This is what the help call the little garden. In a minute we’ll go around the house to the big garden and pool that fronts the ballroom. You know whose house this is?”

“Belongs to Oscar Hale. He and his brother, Edward, are the two richest men in Fort Worth. Their daddy was one of the old Texas wildcatters. The two brothers were worth a few hundred million each, mainly from some old oil holdings down in South Texas and out around Midland. Life must have been pretty good.

Then it got better about ten years ago when the oil boys started fracking and horizontal drilling. Counting proven reserves still in the ground, word is they’re worth eighty billion, well, maybe just a little less now that we have an oil glut.”

One of the servers in the kitchen had seen the two men and brought two bottles of water on a silver tray.

“Thanks…Sorry, I forgot your name.”

“Sarah Jane, Walt. My pleasure. Let me know if you need anything else.”

Walt took a sip from his bottle as Sarah Jane returned to the house. “Yeah. His legal residence is still in Fort Worth, and I understand he and his wife vote in this precinct, only they really live in New York City. He always kept an apartment there. When the oil money started gushing, he upgraded to a twenty room penthouse that I hear overlooks Central Park. He’s big in the arts scene up there, opera, ballet, you name it. He’s also building the Hale Museum of Fine Art here in Fort Worth.”

Jack nodded his head. “Okay, I know who you’re talking about. My girlfriend is thrilled about another museum in Fort Worth. She’s into that kind of thing. When I moved here, she took me to every damn one of them. The western art in the Amon Carter museum was really all that interested me. So, the Hales play with the big boys, and the governor’s coming. From what I read, Governor Lardner travels all over the world. Never seems to have a problem. What’s the big deal here?” 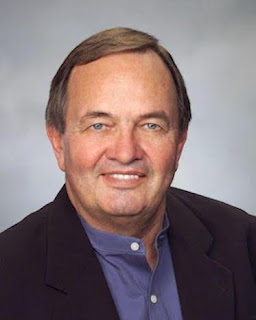 Larry D. Thompson was first a trial lawyer. He tried more than 300 cases throughout Texas, winning in excess of 95% of them. When his youngest son graduated from college, he decided to write his first novel. Since his mother was an English teacher and his brother, Thomas Thompson, had been a best-selling author, it seemed the natural thing to do.

Larry writes about what he knows best…lawyers, courtrooms and trials. The legal thriller is his genre. DARK MONEY is his fifth story and the second in the Jack Bryant series.

Larry and his wife, Vicki, call Houston home and spend their summers on a mountain top in Vail, Colorado. He has two daughters, two sons and four grandchildren.

Larry D. Thompson is giving away a $25 Amazon Gift Card!
Terms & Conditions:
By entering the giveaway, you are confirming you are at least 18 years old.
One winner will be chosen via Rafflecopter to receive one $25 Amazon Gift Card
This giveaway begins March 1 and ends May 27.
Winners will be contacted via email on May 28.
Winners have 48 hours to reply.


Good luck everyone!
a Rafflecopter giveaway
Posted by Maria at Tuesday, May 03, 2016