Welcome to my stop on the Virtual Tour, presented by Goddess Fish Promotions, for Romantic Road by Blair McDowell.  Please leave a comment or question for Blair to let her know you stopped by.  You can enter her tour wide giveaway, for a $15 Amazon/B&N GC, by filling out the Rafflecopter form below.  You can also follow the stops on Blair’s tour by clicking on the banner above.  The more stops you visit, the better your odds of winning.  Please check back this weekend for my review of Romantic Road.

What is the Appeal of Romantic Suspense? By Blair McDowell

Romance has the largest market of all books published in English in the United States.  And of all books classified as “Romance” the most popular are Historical and Suspense. This is an indisputable fact.

That being so, why is it? What makes Romantic Suspense so appealing to readers?

Generally speaking, the plot of any romance novel is about a man, a woman, (or any combination of romantic partners) and a problem or problems they must resolve before they can live happily ever after.

The source of this danger may be unclear to the characters and thus to the reader, until late in the book. There may be ambiguity as to who the villain is, or even why the hero and heroine are in trouble or are being threatened and/or pursued. Chills and thrills are what make a good romantic suspense.

A fan of my books recently said to me after reading Romantic Road, “I kept thinking I was at the climax of the book and then something else happened!”

I was delighted. That’s what we aim for in Romantic Suspense, cliff-hanging chapter endings, unexpected plot twists, characters who are not always as they seem, and above all, pacing -- fast, spinning-out-of-control pacing.

And yet, the relationship between the two central characters must grow and develop in a credible way through-out the rollercoaster ride of Romantic Suspense. The “romance” in Romantic Suspense is just as important as the “suspense”. This is not easy from a writer’s perspective. How do we make time for love in the midst of chase scenes and abductions and car explosions and other such adventures? It isn’t enough to have the two simply fall into each other’s’ arms as the curtain falls. A love story has somehow to be woven into the fabric of the story, as the two race across continents, evade villains, and save whatever it is they’re trying to save.

Another aspect to consider when writing Romantic Suspense is research. While research is important when writing in any genre, it brings a set of highly specific problems when writing suspense. What is police procedure, in France or Italy or Germany? How do paramedics behave when they first enter an accident scene in Amsterdam? What’s the weather like in Rothenberg in October? Where is the hospital on the Greek island of Crete?

Research is vital to writing any novel, but it is of particular importance when writing romantic suspense. It all goes to the point of believability, or more accurately, to the suspension of disbelief in the reader. Thorough research makes this easier to achieve.

I’m a great believer in on-site research. Google may be great, but when I set my book in Salzburg, I’ve been to Salzburg. When I describe a hotel on the Romantische Strasse, I’ve stayed there, and when I describe the taste of apple fritters in Germany, I’ve eaten them. And, yes, I’ve been in the hospital on Crete, although I don’t necessarily recommend going to that extreme!

The point is, all my stories are set in places I know and love. I think this gives them a certain credibility they might not otherwise have.

I love writing romantic suspense. I love the mental gymnastics of plot construction and the fun of it when a new possibility suddenly occurs to me as I’m writing.

In all, romantic suspense is my favorite genre in which either to read or to write. 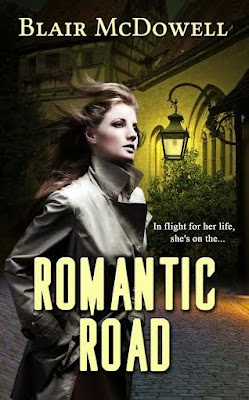 When Lacy Telchev buries her husband she finds herself in treacherous waters. Igor, much older than Lacy, had secrets. Suddenly Lacy is being chased across Europe by men who believe she can lead them to those secrets. Evading her pursuers with the aid of a chance acquaintance, the handsome and mysterious Max Petersen, Lacy travels across Germany, Austria and Hungary, to a shattering discovery in Budapest.

Along the way, she meets three women from Igor's past. As Igor's story unfolds through them, Lacy is less and less certain who her husband really was. Who can Lacy trust? Will she survive to find out?

They were leaving the hotel when Lacy grabbed Max’s arm. “Stop!”

“There’s a man waiting at the station.”

Max looked at him. “The one in the raincoat?” “He’s one of the men who threatened me back in the Berkshires that night. And then again in Wurzburg.”

“What’s he doing here?” Lacy’s voice rose on a note of hysteria. “How did they find me? Why are they doing this to me?”

As Max studied him, the man was joined by his partner.

“You’re with me, Lacy. I won’t let anything bad happen to you. You must believe me. These people have no authority here. Now, let’s just go take the train down the mountain. We’ll lose them when we get off, I promise you.” 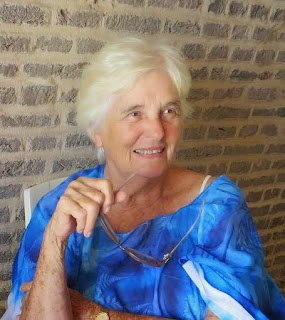 Blair McDowell wrote her first short story when she was eleven and has never ceased writing since, although only recently has she been able to return to her first love, writing fiction.  During her early years, she taught in universities in the United States, Canada and Australia, and wrote several highly successful books in her field.

Her research has taken her to many interesting places.  She has lived in Europe, Australia, the United States and the Caribbean and Canada, and spent considerable time in still other places, Iceland, the Far East, and the Torres Strait Islands off the coast of New Guinea. Now she travels for pleasure. Portugal, Greece and Italy are favorite haunts.

Her books are set in places she knows and loves and are peopled with characters drawn from her experiences of those places.  The Memory of Roses takes readers to the Greek Island of Corfu, where a young woman finds her future while searching for her father's past.  In Delighting in Your Company, the reader is transported to a small island in the Caribbean, with a heroine who finds herself in the unenviable position of falling in love with a ghost.  The setting for Sonata is the city of Vancouver, with its vibrant multicultural population and its rich musical life, and the heroine is a musician who finds herself in unexpected danger.

In her most recent release, Romantic Road, Lacy Telchev, is pursued along Germany’s famous Romantische Strausse as she follows clues left by her late husband in order to solve a mystery that she doesn’t understand, while being chased by dangerous and cunning adversaries.

She hopes her readers will enjoy reading these books as much as she enjoyed writing them.

a Rafflecopter giveaway
Posted by Maria at Friday, May 22, 2015