Virtual Tour & #Giveaway for Charmed, I'm Sure by Lynda Simmons

Welcome to my stop on the Virtual Tour, presented by Goddess Fish Promotions, for Charmed I’m Sure by Lynda Simmons.  Please leave a comment or question for Lynda to let her know you stopped by.  You can enter her tour wide giveaway, for a $50 Amazon GC, by filling out the Rafflecopter form below.  You can follow all of the stops on Lynda’s tour by clicking on the tour banner above.  Lynda has written an exclusive Flash Fiction Story for this tour, which is broken up in 10 parts, and which is featured at the first 10 stops on her tour.  I am the fifth stop so the guest post is part 5 of the story.  You will want to follow the first ten stops in order to enjoy the flash fiction, so if you have not visited the first 4 stops, please do so now.  Enjoy!

“I wasn’t pretending,” I say, stepping around her and striking out for the door, hoping she’ll follow. “And you have to go.”
But even after I turn the lock and pull open the door, she’s still in no hurry to leave.
“I love a bargain,” she says, pulling a paperback from one of the Loonie Bins.
“I’m not kidding,” I tell her. “The shop is closed.”
“So you’ve said, yet I heard you promise Tom you’d stay.” She puts the book back and wanders across the aisle to the record collection. Picks up an album and flips it over to the back. “Which leaves me wondering who you’re lying to. Me, or your friend.”
“I didn’t lie.”
“Then the store is open?”
“No, but when he’s in a better frame of mind, I’m sure he’ll understand.”
She glances over, tilts her head to the side. “So you believe in happy endings?”
“I believe in Tom.”
“He must be quite the man.”
“The best,” I say, catching sight of Ginger at my feet; peering around my legs, curious about what’s going on outside. She’s been an indoor cat all of her life, content to sit by the till or watch the world from the window. While I’m sure she won’t actually make a run for it, I can’t take that risk and let the door swing shut on both of us.
“What exactly will the wonderful Tom understand?” the girl asks.
“I don’t see how any of that is your business.” I check the clock again. The bakery is definitely out, but there’s still time for groceries and a mad dash for home. How to explain the lack of Neapolitans will be the difficulty once I get there, and George is rarely understanding.
She hasn’t moved, forcing me to take a few steps toward her. “Look, Miss, I don’t know why you’re here, or what you want but I don’t have any more time to –”
“Shit,” she says, then drops the album and leaps back into one of the aisles.
“What now –“
But the tinkling of the bell above the door cuts me off.
I turn around to see two police officers coming into the shop, neither one paying any attention to Ginger nosing around by their feet.
“Don’t let her out,” I holler and make a grab for the cat. She lets out a yowl and leaps from my arms, landing on the counter with a thud.
I force a smile for the officers. “Can I help you?”
“I hope so,” one of them says while the other wanders over to the table with the Loonie Bins and starts poking around in the paperbacks.
The one still doing his job hands me a cell phone. “We’re looking for this girl. She was outside earlier playing fortune teller. Have you seen her?”

I can see her right now at the end of the row directly behind him, trying to make her way quietly to the shelter of the Canadiana section. She shoots me a quick, desperate glance. Shakes her head just once. Please.
“No, I haven’t,” I tell the officer, although I can’t say why. All I know is that she looks young and vulnerable right now, and while I want her out, I’d rather she left under her own steam. I hand the phone back. “Why are you looking for her?”
The girl doesn’t hang around to hear the rest, disappearing behind the next row of books as the other officer returns.
“Because we don’t think she was working alone,” the officer says, taking back the phone, flipping through the pictures. “While she was forecasting the future, someone else was picking pockets. Injecting a little European reality into the Taste of Europe festival, I suppose, but fortunately for us someone caught him on video, then started hollering. The two of them took off in different directions and we’ve been searching for them since.” He holds up the phone again. “We believe this guy is her partner.”
It’s a picture of a young man, probably the same age as her, tall and lanky with thick dark hair falling into his eyes. The same young man who told me I’d have to pay to hear more about my future, as if it mattered.
“Any chance you’ve seen him?”
I shake my head, pleased to be telling the truth at last.
The officer hands me a card. “If you see either of them, don’t talk to them, don’t try to hold them. Just call. We’ve got plenty of officers on patrol today. Someone will be here within minutes.”
The other officer holds up an album, Cliff Richards Summer Holiday – a bargain at $5.00. And no tax for the festival.
“My dad will love this.”He plunks a five dollar bill and the album on the counter. “I’ll pick it up when I get off at noon.”
I’m about to object when he grins and pats his jacket. “Nowhere to store it right now.”
The other officer opens the front door and shushes Ginger away. “Keep a lookout for the fortune teller and the pickpocket,” he says and the other one laughs.
“Sounds like one of those titles in the Loonie Bins.” He pauses and turns back to me. “By the way, you might want to move that table outside for the sidewalk sale.”
“That was the original plan but –”
“We can take it out for you right now,” says the one who bought the album.
“Might as well,” the other agrees and they head back inside.
“It’s fine, really,” I try, but they’re already on either side of the table. Already carrying it past me, complete with Loonie Bins on top.
“Just hold the door,” one of them says.
“And watch the cat,” the other adds as they walk out with the table full of Tom’s books.
“You have a nice day,” they call and head off to the shop next door, still on the hunt for the gypsy and the thief. And they’re right, no matter how you phrase it, it still sounds like one of those buck-a-book titles.
“Thank you,” the girl says.
I close the door and glance back to see Ginger in her arms, purring loudly, making no move to get away.
“It’s fine,” I say, counting four, make that five, people already stopping to examine the Loonie Bins.
“It’s not fine at all,” she says, and lays the cat on the counter. “We got off on the wrong foot earlier.” She walks toward me, stops a civilized distance away this time then holds out a hand. “I’m Lucy. And I’ll tell you the rest of your fortune for free.” 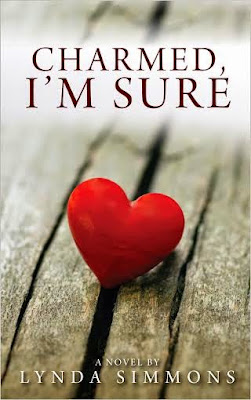 Laugh Out Loud Funny...With Just a Touch of Magic

One minute Maxine Henley is the happy bride-to-be and the next she’s the girl who gets dumped over the phone. Max has never believed in magic and fairy’s tales, but if wearing a love charm can warm her fiancé’s cold feet, she’s happy to stuff that little wooden heart next to her own and wait. The charm came with a promise that the right man will find her, guaranteed, but how can that happen when her teenage crush Sam O’Neal keeps getting in the way! 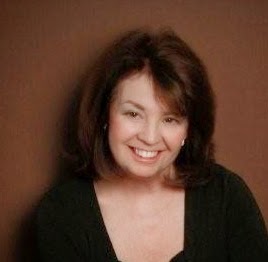 Lynda Simmons is a writer by day, college instructor by night and a late sleeper on weekends. She grew up in Toronto reading Greek mythology, bringing home stray cats and making up stories about bodies in the basement. From an early age, her family knew she would either end up as a writer or the old lady with a hundred cats. As luck would have it, she married a man with allergies so writing it was.

With two daughters to raise, Lynda and her husband moved into a lovely two storey mortgage in Burlington, a small city on the water just outside Toronto. While the girls are grown and gone, Lynda and her husband are still there. And yes, there is a cat – a beautiful, if spoiled, Birman. If you’d like to read the legend of Birman cats click here. If you’d like a link to allergy relief, click here.

When she’s not writing or teaching, Lynda gives serious thought to using the treadmill in her basement. Fortunately, she’s found that if she waits long enough, something urgent will pop up and save her - like a phone call or an e-mail or a whistling kettle. Or even that cat just looking for a little more attention!

a Rafflecopter giveaway
Posted by Maria at Friday, May 08, 2015