Virtual Tour & #Giveaway by A Soul To Keep by Moira Keith

Welcome to my stop on the Virtual Tour, presented by Goddess Fish Promotions, for A Soul To Keep by Moira Keith.  Please leave a comment or question for Moira to let her know you stopped by.  You can enter her tour wide giveaway, for a $15 Amazon/B&N GC, by filling out the Rafflecopter form below.  You can also follow the rest of Moira’s tour by clicking on the tour banner above.

Thank you for joining me in the shadows. Pay no attention to that odd silhouette over there. Weird things live here.  Where do you hail from?

Moira:  I’m so pleased to be here and thankfully, weird things do not bother me. Afterall, I hail from a lovely land of enchantment and neon known as Las Vegas, and there are many oddities to be seen lurking in the shadows here.

Tell me about your latest book. What makes it stand out from the crowd?

Moira:  A Soul to Keep is the first in the Saints and Sinners series. It follows the women who love some of Heaven’s fallen and some of Hell’s unfortunate souls. While it does have a good versus evil theme, one of the things I love about it, is the battle of good and evil within one’s self.

Do you have anything new in the works and can you tell us a bit about it?

Moira:  I’m currently working on the follow up for the A Soul to Keep. In the first book you get to meet one of the demon’s, Azrael. Admittedly, I have a love hate relationship with him and I think the readers will as well. He’s a bit of an arse, stubborn beyond belief, and self-centered. Not without reason though. His and Syn’s story will be a bit difficult to unfurl, but I have a feeling it will be a real fun ride.

What advice would you give to writers just starting out?

Moira:  Write every day. Even if it is just a little bit. The hardest thing is putting the words on paper, but it is also the most rewarding. You can’t get to the end if you don’t do that one thing daily. Finding a great support group is important as well. Other writers are sometimes brutally honest with their feedback, but you can learn and grow from it.

How did you deal with rejection letters? Any tips for unpublished writers?

Moira:  Rejection letters are part of the process. Every author gets them. If the rejection letter was a form rejection, I just pushed it aside and tried not to wallow in it. If it has some feedback in it, I try to apply it to my story and hopefully learn something in the process. Writing is a very personal act. You are pouring your heart and soul out into every word, so any rejection stings. You just have to shake it off and keep writing. As they say…every rejection gets you that much closer to the acceptance.

What tools of the trade are must-haves for you?

Moira:  The Chicago Manual of Style can be quite beneficial as a writer. Especially when you are in the editing phase. Music isn’t necessarily a tool of the trade, but I use it often to help push me through scenes I may be stuck on. A dry erase board for tracking character and scene details is also very useful, especially when writing a series.

What's the craziest thing you've ever done to research a story?

Moira:  Honestly, I’ve not done anything crazy in the name of research…yet.

Moira:  I like to read Urban Fantasies and Mysteries. One of my favorite books that I will re-read and still love is Velocity by Dean Koontz. It is such an awesome book that just doesn’t get old.

Who is your favorite author and why?

Moira:  Vicki Pettersson is my current fav. She is just made of awesome sauce and is so personable. She really makes an effort to connect with her fans and fellow writers, her stories are compelling, and she is so very down to earth. I really admire her for that and hope to follow her example.

Now for the fun questions.  Let's strip away the veil of invisibility. Do you have a day job alongside writing and will you tell us about it?

Moira:  I do have a day job. I work in the banking industry (which is about as exciting as it sounds).

If you weren't a writer, what career might you have chosen?

Moira:  I would like to think that I would have found another creative outlet to pursue for a career or perhaps I would have finally gone and obtained a degree in marine biology so I could study the creatures in the vast ocean and live near the beach.

Who is your favorite superhero (or heroine)? Can be from a comic book, movie, novel, cartoon, video game or anywhere else heroes reign.

Moira:  I’m partial to Thor…thank you Chris Hemsworth for making him so droolworthy.

Moira:  Ooh. Roarke from J.D. Robb’s In Death series. He’s the perfect embodiment of tortured soul, bad boy, and man of action wrapped up in one handsome package.

You finally have an evening free to spend any way you want. Money is no object. Where do you go? What would you do?

Moira:  Fly to New York and catch Wicked live on Broadway. I’ve seen it performed when it came through Vegas, but I think catching the experience in New York would be unreal.

You've been gifted (or cursed) with the ability to shift into another form by a witch. What kind of shifter are you? Why?

Moira:  A phoenix. I’ve always been fascinated by the mythology behind the bird of fire and I think it could be quite torturous to constantly be reborn, but possibly beneficial too. Hmm…perhaps I need to write a book…

Thanks so much for being my guest today! Anything else you'd like to share with my readers?  Don't forget to give us links to your website etc. 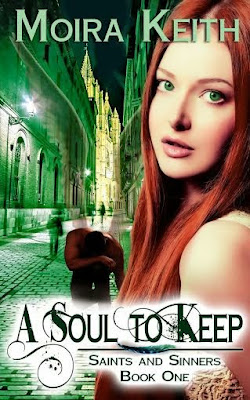 A Soul to Keep
By Moira Keith
Saints and Sinners, Book 1

In the realm of the Fallen, there’s a little saint and sinner in us all…

One moment can impact the future.

Love never served Jayde Cross well and owing a debt to a demon is the proof. Reaping is a lonely existence and with her thirtieth birthday approaching, she's got enough to worry about without adding romance to the mix. It's why her friendship with the man living next door works so well. They both live lives filled with secrets and ignoring their self-imposed rules isn’t an option. Too bad her heart disagrees.

The past is about to come back and haunt one of Heaven’s Fallen.

Caleb Thorne always found living among mortals difficult, until he met the intriguing woman down the hall. She demands nothing of him and is completely safe. When an enemy from his past catches up with him, Caleb soon discovers the rules of the Fallen exist for a reason and loving a mortal may prove to be the bigger danger.

In a world where their love is forbidden, Jayde and Caleb may just discover that sometimes breaking rules is the only thing that can set you free.

“You are in over your head.”

Caleb spun around and found Gabriel sitting on the bench behind him. “You really need to get a life, Gabriel, and stop obsessing over mine.”

“Could you be anymore cryptic?”

“No. You know I'm bound from revealing certain things. Fate...destiny...whatever you want to call it, has to unfold. I can only warn based on the knowledge I possess. I cannot offer up any information and risk potentially altering the course of fate.” Gabriel leaned against the back of the bench and studied him.

“Never stopped you before.” Caleb knew if it would sway things in a direction that would benefit him or the Fallen in general, Gabriel would share every detail he possessed.

“You really are in over your head, aren't you?”

“I have no idea what you’re talking about.”

Gabriel sighed and stared out across the street. “I could still have you reassigned. It's not too late.”

“Good luck trying. I’ll not leave here. Not while I believe she’s in danger.”

“Mortal women cannot love us the way we long to be loved. I tried to warn you a century ago when Taelynn was still alive. The mortals we fall for become pawns in the battle between good and evil. Your love for your wife, even in death, allowed Azrael to use her against you. To use her against all of us. If you’d listened when I told you to stay away from her, she would’ve been safe to live out the rest of her life and you would still be amongst the glorious ranks of Michael’s army and not stuck here with me. Instead, she is lost to us, the one sent to protect her has gone rogue, and it cost you dearly. You didn’t listen then, but I urge you to listen now.”

Moira Keith is a lover of shoes, a connoisseur of Guinness, baker of cocktail themed cupcakes, and an overall complete mess! She is also a proud Texan by birth (and true Southern girl at heart).

Moira lives in the city of neon with her twin zombie sons, a fish, three parakeets, and a turtle.

a Rafflecopter giveaway
Posted by Maria at Thursday, May 14, 2015