Virtual Tour & #Giveaway for The Bleikovat Event by Hawk MacKinney

Welcome to my stop on the Virtual Book Tour, presented by Goddess Fish Promotions, for The Bleikovat Event – The Cairns of Sainctuarie by Hawk MacKinney.  Please leave a comment or question for Hawk to let him know you stopped by.  You can enter his tour wide giveaway, for a $25 Amazon/B&N GC, by filling out the rafflecopter form below.  You can follow all of the stops on Hawk’s tour by clicking on the banner above.  The more stops you visit, the better your odds of winning. 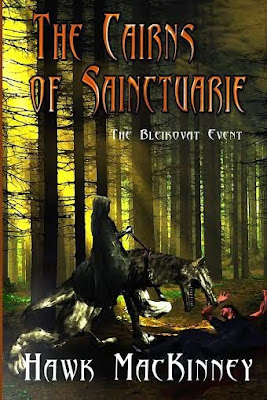 The Cairns of Sainctuarie
by Hawk MacKinney
The Bleikovat Event, Volume 1

Among the close-kin clans of western rural Malfesian Murians, farming and gelf ranches are long held traditions.  Times are good…full barns, fat gelf calves and large families thrive among the sprawling grain fields and hamlets and the river from which they derive their name—the Feldon.  Word comes with the trade caravans that times are not so good in the regions far to the east of the Feldon River:  tumultuous changes stir among the remote province of Bleikovia.  Old timer Feldovats shrug it off as one more squabble between clans over boundaries or water rights…too distant to affect the Feldovats.

The western clans learn too late, however, it is no local squabble.  Outnumbered and unprepared, Feldovats resist a hoard bent on plunder and conquest.  Days of battle along the Feldon River stain the riverbanks in green Murian blood.  In the finals days of exhausted fighting, Judikar Klarvko Celo, leader of the Clan Klarvkon and the Feldovats, is fatally stabbed with the slow-acting sevon poison.  The Judikar’s consort, Etikaa Klarvkaa, becomes Regentkaa, and with Celovat Field Commander Korvo Celo serving as her advisor, she leads the demoralized Feldovat survivors on a gruesome ill-prepared winter trek through high mountain passes of ice and blizzard snow in an attempt to elude the Green Dragon forces of the Bleikovats.

Etkaa’s only son, Klarvko Celo II, helps spirit Feldovat young across a remote mountain exodus to the west toward Eedov Province. The battered, starving Feldovats reach the Malfesian coast at Eedov City only to be confronted with their implacable enemy determined to destroy the remaining Klarvkon rabble.  Taking passage on crowded lumbering Maalonovion freighters, Feldovats and Malfesian refugees set sail.  On arrival in Maalon City they are welcomed among their Maalon hosts, and settle into a new life.

But famine and a pandemic pestilence stir old hates and nurse former ambitions.  The enraged Overseers of Bleikovia move against the Klarvkons, this time bringing bloodshed to Maalonovia.  The exiles from the Feldon must fight once again, but starvation and plague across the Planete Myr make it a different war from the battles along the Feldon…a na’ä blikovat…the Bleikovvat Phenomenon…an event with unexpected consequences and outcomes none could have foreseen.

Before the vendetta killing is exhausted, the Regentkaa Klarvkaa and her son are swept onto the Maalon throne, setting the Klarvkon Dynasty and the Murians toward an intergalactic golden age, and a star-flung destiny the once-agrarian Feldovats could never have envisaged.

There had been warnings; far from the Feldon River, across the flat prairies and far-flung farming settlements, in the grain fields and remote gelf ranches of the far-west reaches of Feldon provinces. Most dismissed them, “…idle gossip from those with too little to do.”

The onslaught struck late and faraway during the last harvesting moons of the growing season, and once again unsettled whispers passed. Among the markets and along trade routes far from the fields and farms of the Feldovat fiefdoms the word spread.

That was before dispatch riders and message runners on ponderous muscled claks brought more disturbing news: Heavy raids and ambushes all along the hinterlands this side of the Bleikov-Bormeikovat frontiers.

One grizzled Murian farmer’s slit-pupils narrowed to thin slivers. Gently tightened the reins, hooked to the plough. The lumbering gelf plodded to a stop. He laid the planed-wood handles of the plough sidewise onto the fresh furrow. Without moving from the trenched rows the gelf reached its thick neck to nibble the green tufts around its feet. The weathered work-aged farmer carefully slipped the reins off his shoulder. Fingered the split creeping along one sweat-stained handle, muttered, “…get this to the woodworker before spring ploughing times. Get it braced before I have to barter for a new plough handle.” Pulled off his wide-brim woven hat; wiped his forehead. Uncorked his gelf-leather water pouch; took long slow swallows. Spit a bitter-chewed slurry of brown chakklu; scowled,"…ill-tempered uplander Bleikovats." After another long swallow he re-plugged the pouch. Bit off another twist of dried chakklu.

Coming up the next furrow behind him, his nephew pulled the harrow to a stop across from his uncle. Kicked loose a couple of big weeded clods wedged under the harrow frame and brushed dirt off the mottled green scab on the back of his hand he had cut yestermorn while sharpening the plough. Reached for his water bag. "Bleikovats are sure stirring a big fuss.” Put down his water bag to help stack the shocks; hefted another bound sheaf.

Hawk began writing mysteries for his school newspaper. His works of fiction, historical love stories, science fiction and mystery-thrillers are not genre-centered, but plot-character driven, and reflect his southwest upbringing in Arkansas, Texas and Oklahoma.

Moccasin Trace, a historical novel nominated for the prestigious Michael Shaara Award for Excellence in Civil War Fiction and the Writers Notes Book Award, details the family bloodlines of his serial protagonist in the Craige Ingram Mystery Series. Vault of Secrets, the first book in the Ingram series, was followed by Nymrod Resurrection, Blood and Gold, and The Lady of Corpsewood Manor. All have received national attention.

Walking the Pet is Hawk’s latest release in the Ingram series. The first book in another mystery-thriller series is scheduled for release in 2015. The Bleikovat Event, the first volume in The Cairns of Sainctuarie science fiction series, was released in 2012. Its sequel, The Missing Planets, has just been released.

a Rafflecopter giveaway
Posted by Maria at Thursday, May 21, 2015