Virtual Tour & #Giveaway for the Keeper's Vow by Fancina Simone

Welcome to my stop on the Virtual Tour, presented by Goddess Fish Promotions, for The Keeper’s Vow by Francina Simone.  Please leave a comment or question for Francina to let her know you stopped by.  You may enter her tour wide giveaway, where one (1) randomly chosen commenter will be awarded a $25 Amazon/BN GC.  You may follow all of the stops on the tour by clicking on the banner above.  The more stops you visit, the better your odds of winning.  Good Luck!

Quality is one of my favorite topics because as a fiction writer, quality is the one thing we are obligated to deliver. This has nothing to do with the kind of story we write, or what voice, or style we use while writing, it has everything to do with the integrity and consistency of our work. For anyone who recognizes my name or is a frequent visitor of my YouTube channel, you’ll know I define quality as a story that is authentic to itself. It is coherent, cohesive and consistent with Characters, Plot, and World Building. This is not to define its relevance or relate-ability to the people. Simply it’s right to say, “I am a story that strived to be the best version of itself.”

With that being said, I break down quality into the authenticity of three categories: Character, Plot, and World Building. These three components are the key to any fictional story, no matter where it’s set, who the target audience is or how we write (style and voice). I say this because these three components are reflective of life itself. Your life is built around you (character) your environment (world building) and the events that take you from birth to death (plot). Everything else is subjective from one person to another.

Quality is important because it is the only way you can truly say “I have written a story worth someone’s time and money.” When you write with authenticity your story becomes an original, it becomes diverse in itself—the same exact way in which when we are authentic to our self, we become an individual with an inimitable perspective. We as authors don’t have control over whether anyone likes our story—but we do have control over the quality of it. Readers and our stories always deserve quality. That is our first and only job, because if we fail at that—no matter how profound or hilarious our story is, when it starts to fall apart at the seams it becomes meaningless. All those themes and that breath taking witty dialogue will fall right into those bottomless potholes.

I once heard the best analogy about quality: fashion. There are some clothes we’d never put on because—EW. We have our favorite brands, colors, cuts, etc. But ultimately when we go to the store or order that trusty white t-shirt we expect exactly what the picture or sign is advertising. A white t-shirt. Not a white t-shirt with (plot) holes or missing an opening for an arm (poor character development) or worst giant red stains on the back (world building that makes no sense).

I know we get lost in the art of writing, but at the end of the day, if we hope to make money from our work, we have to be artistic AND deliver quality. When we make promises in our writing then we have to deliver. No one wants to constantly look past plot holes and convenient character actions in a story they really want to love. And no writer wants to lose the trust and love of their target audience.

So, you have a story and you want to figure out if it is quality or not?
First, remember that story and writing are two different things. That is why we have oral stories and written stories, they are different. Story is all about those three component: Character, Plot, and World. Writing is all about craft, our personal approach to conveying story. We have to master both of these things and constantly learn new and improved ways of storytelling and crafting. It takes time and practice but the good news is, every book is practice.

Second, consume story. Take the best-told stories that you truly love and dissect them. Also, look at all forms of story: books, movies, anime, songs—anything that moves you and inspires you.

Third, consume all forms of style and voice that inspire you and WRITE. Develop your voice and style. Depending on the kind of writer you are, that can mean you write using the voice of your character, or you have a “story” voice, or your own voice and style that can be seen across all of your work.

Fourth is possibly the hardest but most rewarding. Write your story and work it over and over. Find others in your target audience or someone who is really good at tearing story apart and have them read your story and if you can’t defend a part of your story soundly—then re-work it.

At the end of the day, we can only strive for the upmost quality because we are human. We aren’t machines, we error and the beauty in that is we get better and better at it the more we work it. Writing isn’t for the weary and it’s definitely for the slightly insane—but then again, anything we truly love to do requires a little insanity to do it. 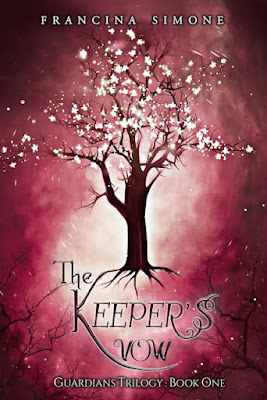 All Katie Watts wants is to pass her junior-year, at Hamilton Private, with as little effort as possible—devoting time to knitting hats, breeding gerbils, becoming a movie critic, or even just sleeping. No wonder she isn’t ready for a world with vampires, werewolves, and nightmares.

Her life is shattered to pieces when Tristan gets stabbed in her front yard. She has no idea where he came from and worse, he hears her thoughts—and when she can’t take anymore, she starts to hear his. No one is who she thought they were. Her father is keeping secrets and when she searches for the truth, she ends up homeless.

As the truth claws its way to the surface, Katie and Tristan grow closer together and they find themselves connected in more ways than she can believe. But is honesty worth more than the peace blissful, ignorance brings? Especially if it sparks a chain of events that will end the lives of millions? Can she live with the truth that begins with her dead mother and ends with The Keeper’s Vow?

Mr. Heckler turned his attention to Tristan. “Why didn’t you call security? We have procedures for situations like this.”

“Do your procedures include letting three werewolves snatch a girl off her porch?”

Mr. Hecklers face turned purple. Spit flew out of his mouth as he spoke. “Innocent people could have been on these streets.”

“Well you should have been protecting them. You have procedures for situations like this.”

Mr. Heckler moved toward Tristan but thought better of it. “Watch it boy. As far as I’m concerned you’re the reason they were on this street!”

“He saved my life,” Katie said, feeling her own rage. Her heart still pounded from hearing a gun go off so close to her head.

“We wouldn’t have let anything happen to you. We would have—”

“Done nothing. I was in the back of that van. I was as good as dead without him. You didn’t even have the decency to show up until it was all over. Those wolves could have killed us.” She didn’t know if the fire she felt was from her pain or anger. How dare they blame him for what happened. How dare they look at him like he was a monster. Like he was a half-breed.

“Enough. Come inside, Katalina,” Tristan said, holding out his blood stained hand to her.

She grabbed it. The look of pure disdain on Mr. Heckler’s face did not go unnoticed. “The school does not look kindly upon discrepancies like this. We have procedures.”

“Bigot,” she shouted at him. Mr. Heckler stiffened and the street fell silent. All eyes were on her. The same expressions from the Christmas party. Shock, horror, and disgust.

Francina Simone is a writer of Epic Urban Fantasies brimming with Magic and Moral Ambiguity.

From the time Francina Simone entered kindergarten, she loved to read and share words with her friends. When she was in the fifth-grade, she was scared to read aloud and so the teacher concluded she wasn’t very good at reading—Francina read anyway.

Francina left her middle school book club behind for the daunting and exciting life as a high school freshmen. She was quickly told Young Adult books were childish and she should concern herself with finer literature—Francina read them anyway.

Francina waved good-bye to her high school life and strutted into University with her YA books and graphic paper to take notes. She witnessed the birth of a YA trend where publishers flocked to sell their stories to teens…stories that were underdeveloped and glaring with structural issues. The message she heard as a consumer was simple—common belief is YA readers aren’t good enough readers to discern quality stories or they are too childish to tell the difference.

Francina dropped her degree in chemistry and decided enough was enough—and set out to write the quality* stories her fellow readers deserved.

After her formative years she moved to Japan, with her best-friend and husband, land of some of the worlds best story-tellers and creators of unique manga. There she worked on her stories and the quest to understand what authenticity* in story means.

Now she lives in Boise with her husband, son, cat, and Catahoula. She spends most of her time battling the terrible-twos and puppy-dom. But when things are quiet—you can hear frantically typing away; her mind far away with her characters in their quest to make the right decisions in a world brimming with magic and moral ambiguity.

a Rafflecopter giveaway
Posted by Maria at Monday, September 12, 2016