Welcome to my stop on the Release Blitz, presented by Inkslinger PR, for Veiled by Karina Halle.  Please leave a comment or question for Karina to let her know you stopped by. 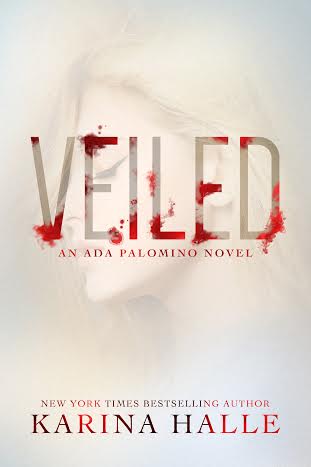 From the New York Times bestselling author of The Lie and The Pact comes a new romance that will test your limits and leave you breathless.

It's something that Ada Palomino has always known so well, having grown up in a house of horrors, surrounded by a family plagued by ghosts and demons and things that go bump in the night. But after the sudden and tragic death of her mother two years ago, death has never felt so personal. Or so close.

Now eighteen, Ada is trying to move on with her life and the last month of summer holds nothing but sunshine and promises with her first year at a Portland design school just around the bend. That is until her increasingly violent and realistic dreams, dreams of other worlds, of portals and veils where her mother is tortured and souls bleed for mercy, start to blend into reality. Ada has to lean on her older sister, Perry, to try and make sense of it all but even then, she's never felt more alone.

Then there's Jay. Tall, handsome and deeply mysterious, Jay would be just another stranger, a familiar face on the bus, if it wasn't for the fact that Ada has met him before. Every night. In every single dream. And the more that Ada is drawn to him in both worlds, the more she's in danger of losing everything. Including her heart. And her very soul. 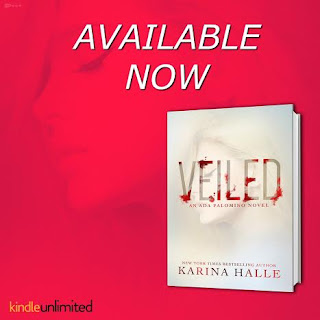 Then, out of nowhere, “You looked beautiful tonight, by the way.”

I try and swallow, his words, the sincerity in his voice rocking my world off-balance. “Which part? When the power went out or when Jacob went upstairs to fight a demon?” I joke. But I joke because I’m feeling this a little too much.

“All of it. You know why I call you Princess?” he asks, his tone graver than before, like he’s letting me in on a very deep secret.

“Because I’m a spoiled brat?”

Well that shut me up. The sentence hangs in the air, larger than life.

He clears his throat and goes on and I have to fight against the urge to roll over and face him. “You have this way about you. You don’t see it. But I do. Like you’re born royalty. The way you hold yourself. Your walk. The face of an angel.”

Butterflies take flight in my gut, spreading through my veins until my whole body feels like its floating. “Why are you being so nice to me? Am I going to die?”

He laughs softly. “I don’t know why I’m saying these things. Just seemed like the things to say. You’re destined for something great, Ada, I know this. And it’s an honor to help see you through it.”

His words cascade down on me like ashes from a fire. Where they land, I’m ignited.

And more than that, he believes in me.

Silence settles over us, stealing time. I hear him breathing in the dark, steady as a heartbeat. He might even be sleeping.

But I can’t even begin to shut down. My entire body, from the top of my scalp, down to my toes, is buzzing with heat and electricity. It’s like everything I felt for him before, everything I try to ignore, is coming out in full force, responding to his words, to his body so close to mine. I can feel the warmth at my back, sinking into my spine, just from his presence only.

I’m starting to have feelings for him. Not just in a he’s a giant hulking beast who’s here to protect me from the underworld way. But real feelings, slowly creeping into my heart, day by day.

The thought is terrifying in the same way that demons are terrifying.

And I’m not sure how much of me I’ll have left. 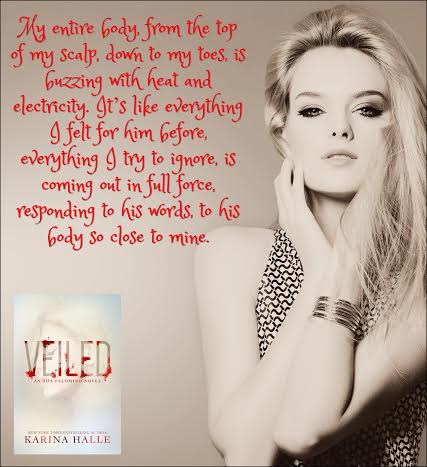 A: No. The main character is 18 and there is sex, crude language and violence in the book. It is recommended for mature teens or 18 and up.

Q: Is there a cliffhanger?

A: Nope! There's also no cheating and no love triangle (think I've covered the bases there!)

Q: Do I need to read the series (Experiment in Terror) that Veiled is a spinoff of first?

A: Absolutely not. Veiled stands alone. You do not need to have read the EIT series beforehand as this follows a different character (Ada Palomino) and a different storyline. However for those who have read EIT, all your favorites are in the book!

Q: Is it horror? Your other series was and I don't handle scary very well...

A: No, it's paranormal romance (though I promise you there are no vampires or werewolves), and while there are creepy elements to the story, it wouldn't be classified as horror. If you can read KMM's Fever Series or ANY urban fantasy, you'll be fine. 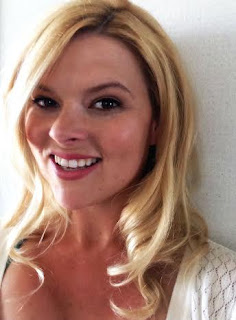 Karina Halle is a former travel writer and music journalist and the New York Times, Wall Street Journal and USA Today Bestselling author of The Pact, Racing the Sun, Sins & Needles and over 25 other wild and romantic reads. She lives on an island off the coast of British Columbia with her husband and her rescue pup, where she drinks a lot of wine, hikes a lot of trails and devours a lot of books.

Halle is represented by the Waxman Leavell Agency and is both self-published and published by Simon & Schuster and Hachette in North America and in the UK. Hit her up on Instagram at @authorHalle, on Twitter at @MetalBlonde and on Facebook. You can also visit www.authorkarinahalle.com and sign up for the newsletter for news, excerpts, previews, private book signing sales and more.