Release Blitz for Legacy of Truth by Christy Nicholas

Welcome to my stop on the Release Blitz, presented by Reading Addiction Book Tours, for Legacy of Truth by Christy Nicholas.  Please leave a comment or question for Christy to let her know you stopped by.

Set in late 18th century Ireland, Esme must grow up quickly in small, isolated northwestern town. Her parents are leaving for America, abandoning her and her sister to fend for themselves. As she struggles to find her place, she finds it difficult to keep hold of what's left that's precious to her.

Once married and in a new town, Esme's only friend, Aisling, helps her through difficult times, as her Traveler husband stays away longer and longer plying his trade.

While Esme has had some comfort in her small family, she must now find comfort on her own, as her treacherous sister tries stealing the family heirloom to sell, a brooch reputed to have mystical powers, which had been left to her by her grandfather. Esme must learn to cope with her dwindling family and growing despair in order to keep the brooch safe.

Other Books in the Druid's Brooch Series: 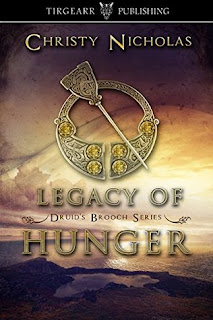 Éamonn Doherty eased onto the old rocking chair beside the crackling fire. As soon as he settled, he was bombarded with children, clamoring eagerly for a story from Grandfa.

Well, it was his fault. Whenever he returned from his wanderings around the country, he would give them a story, a tale of Ireland’s past or his own.

The bairns settled onto the ground at his feet. There were Esme and Eithne, the twins, looking stark and thin with shocks of wild red hair and too many freckles to count.

“That's my spot! I always sit there, Eithne, and you know it!”

Eithne looked at her sister and sniffed, saying nothing. She turned to Éamonn and blinked as if innocent.

Esme pushed at her sister, but Eithne was braced for it. She resisted the shove and looked back over her shoulder with disdain.

In the far corner, with her arms wrapped firmly around her knees, sat the youngest sister, wee Brighid. Everyone called her Bridey. Her solemn green eyes peered at him, owl-like. She must be about ten years old by now. And little Níaṁ wasn’t a sister, but a cousin, her parents having died of a fever. A brown wren, she was plump and sweet, still a toddler.

Éamonn would have preferred some grandsons to pass his stories to, but his son and daughter-in-law, Brian and Shona, had given him only granddaughters thus far. Still, he loved them dearly. His two other children were both dedicated to the church, so Brian was his last hope for grandsons. Éamonn looked at the girls and decided perhaps a story of a manly hero might do them for the night.

He fixed his eyes on wee Níaṁ until she giggled nervously. He tousled up his thick white hair until it looked like a lion and she laughed. Smiling, he began.

“Tonight our tale will begin with a hero of great fame, for who has never heard of Fionn Mac Cumhaill, leader of the Fianna, Warriors of Ireland?”

Interrupted, Éamonn cocked his head. “Yes, child? What is it, my dear?”

“I haven’t heard of him, Grandfa.”

Éamonn closed his eyes, reaching for patience. The children weren’t to know what a rhetorical question was.

“That’s all right, mo chuisle. I will be telling you now, so?”

The girl nodded and wrapped her hands more tightly around her knees until she was just a pair of feet, arms and a curly mass of red hair sparkling in the firelight. For a moment, Éamonn went back in time, to the memory of his dear, long-dead wife, Katie. She had hair such as that, wild and bright. The windows rattled as the wind outside picked up. The children all shifted uncomfortably.

“The Fianna were a band of warriors, pledged to protect the shores of Ireland from foreigners. Fionn’s father was the leader of the Fianna, so he had his son raised by a warrior woman. Have you ever seen a warrior woman, Eithne?”

“I have!” The girl was the boldest of the lot. “There is a woman who hunts up in Bunbeg. I heard Alan say she came into his dad’s bakery one day!”

“I heard that first! He told me first.” Esme said.

“Girls, that’s enough. Would you like to know about this warrior woman?”

It did the trick. All four children looked up at him, expectant.

He grinned and got back into the rhythm of his tale.

“This great woman was called Liath Luachra, and she was tall, with long muscles and longer hair. Her brown hair she kept in thin braids, which went all the way down to her knees. She was a fierce warrior, always clad in skins and furs, and she taught Fionn all her arts. When he had learned all he could from her, he left to join the Fianna.

"But the Fianna knew him for his father’s son and worried for his youth and safety. They told him he must leave, and they could not protect him from harm. This angered Fionn, so he left in a temper. After his temper had cooled, he sought out a Druid to learn wisdom. The Druid he found was named Finnegas. Finnegas spent seven years trying to catch the Salmon of Knowledge, and he had just caught the fish before Fionn found him. It roasted on the fire, and Finnegas told Fionn to watch it while he got more firewood."

“Fionn watched the fish, watched it bubble and pop, sizzle and squeak.”

Níaṁ let out a squeak of her own to help with the sound effects.

“He saw a great blister form on the skin of the salmon, growing larger and larger, about to pop. He pressed his thumb to it to push it back down so the skin wouldn’t be blemished. As he did so, his skin burned, so he stuck his thumb in his mouth.” Éamonn demonstrated with his finger and looked around until each child did the same.

“But he had done a terrible thing, now.”

“What was so horrible, Grandfa?” Bridey asked with wide eyes. “All he did was touch the fish!” She replaced the thumb in her mouth absent-mindedly.

“Ah, that is true. But, you see, Fionn was the first to taste of the flesh of the Salmon of Knowledge, and it meant he now had all the Salmon’s great wisdom. Finnegas was furious and chased him out with a club, but Fionn now had the knowledge and wisdom he needed to lead the Fianna fairly.”

All the girls watched him for the end of the tale.

“In the end, he controlled his own fate, and therefore could make himself happy. That's all that any one of us can do, aye?”

When Níaṁ realized the tale was over, she belatedly removed her thumbs from her mouth. As she did, he picked her up into his lap and rocked in front of the fire with her. She was a solid, warm little child. Brian might not be able to make his farm work well, but he at least kept his children fed.

He sang a sad, low song of lost love and broken promises until each child fell asleep on the soft, white wings of fantasy.


Christy Nicholas lives in western New York State with her husband, dog, cats and sugar gliders. She works as an accountant, an artist, and an author, and is likely looking for another career that begins with A.

Legacy of Truth is available for $.99 during pre-order and the first week of release only. After that the list price is $5.99