Welcome to my stop on the Book Blast, presented by Tasty Book Tours, for Secret Dream by Lindsay McKenna.  Please leave a comment or question for Lindsay to let her know you stopped by.  You may enter her tour wide giveaway by filling out the Rafflecopter form below.  Good Luck! 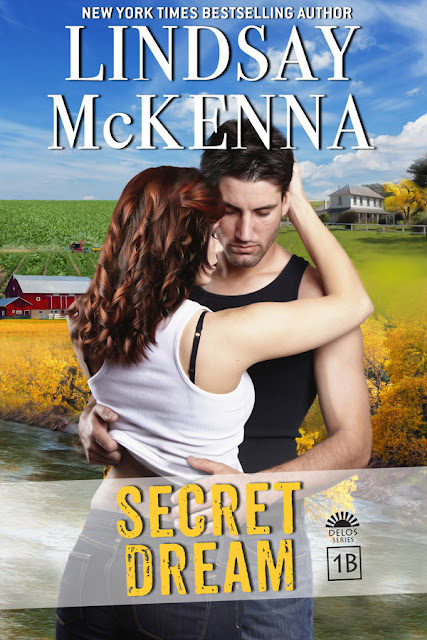 Lia just wants him to meet her parents.
Why does this feel like the fight of his life?

Ex-Navy SEAL Cav Jordan faces danger daily in his job as a security expert. He even faced down a gang of South American drug dealers to protect his fiancée, Lia Cassidy. So why is he terrified of meeting her parents? Having lived through his own horrible childhood Cav can’t understand the situation is he is walking into. Lia just wants him to meet her parents. Why does this feel like the fight of his life?

Novella: The continued story of Cav and Lia from Nowhere to Hide, book 1 of the Delos Series.

For a moment, Cav was stunned by the sudden kindness emanating from the farmer’s expression who was thin, wiry, sunburned and physically sinewy from the daily work he did.  Gripping the farmer’s calloused roughened hand, he said, “Nice to meet you, sir.  And I was just doing my job.  Call me  Cav?”

“Call me Steve.”  He clapped him heartily on the back, still clasping his other hand.  “And you’re a hero to us, son. Nothing less.”  Steve released him, keeping his hand on Cav’s broad shoulder, watching Lia clinging to her mother, both of them in a tight, loving embrace with one another.

Embarrassed by such a show of emotions, Cav murmured, “Thank you, sir.”

Steve gave him an assessing look.  “Just Steve will do.”

“Yes, sir….I mean, okay,” Cav stumbled.  It was very different meeting people who were strangers, but this was Lia’s parents and he didn’t want to fuck this up for her.  Awkwardly, he stood there, watching tears roll down Susan’s face.  He wasn’t sure that Lia wasn’t crying too, such was the tight bond they shared.  Obliquely, his mind leaped backward.  Cav remembered the times his mother had cried.  But they were tears of pain.  Tears mingled with blood from her nose, a split lip or both after his father got done beating her up.  How many times had Cav cried alone in his room wishing she would run away with him from his monster father?

Steve clapped him on the shoulder.  “Let’s us guys go find your luggage, huh?” and he smiled a little.

Steve laughed and patted him warmly on the back.   “You’re staying a week with us, Cav.  I’ll work that military side you out of you by then.  Come on, let’s hunt up that luggage for you and our Lia, eh?”

There was a male gruffness mingled with warmth to Steve that made Cav want to open up to the man.  He had a deeply weathered face, his blue eyes the same color as Lia’s.  The woman he loved had her mother’s same color of hair, her father’s sparkling, mischievous looking eyes and her smile.  There was benevolence to Steve Cassidy and Cav automatically found himself wanting to be close to this man who exuded a male gentleness he rarely found in any man.  “Thanks for coming to pick us up,” Cav said, noting that the baggage from their flight would be spit out by Carousel Two.

“We’ve been looking forward to seeing you two,” Steve said, standing with his hands on his hips, watching the luggage starting to be dropped off the conveyor belt.  “Did you have a good flight?”

Cav felt Steve’s genuine sincerity.  He hooked a look over his shoulder, seeing Lia and her mother talking animatedly with one another as they walked toward them.  Susan had given Lia her smile and her beauty, no question.  He liked that the mother had hooked her arm around Lia’s waist and they walked closely, their affection for everyone to see.  He knew Lia’s affection himself and already, he could see how happy she was at being home with her parents once more.  They breathed even more life into her, if that was possible.  Compared to the ghost of a person she was in Costa Rica months earlier, Cav was stunned at Lia’s natural radiance.  She was sunshine to his darkened soul who craved her.

“Uh oh,” Steve murmured, grinning as he turned.  “I’m about to get attacked.”

For a moment, the word put Cav on instant guard. But as he turned, he saw Steve opening his arms as Lia flew into them, her arms wide open, joy radiant on her face as she clung to her father.  A lump formed in his throat as he watched Lia being swallowed up by the big man who kissed her hair, kissed that cheek that had that deep scar on it, his eyes only for his beaming daughter in his arms.  His gaze flicked to Susan, who stood a few feet away, teary eyed, smiling, her lower lip trembling as she watched Lia with her doting father.  It hurt to swallow and Cav turned away, remembering too much of the twisted and distorted family he’d somehow managed to survive.  He’d never known a moment of affection from his father.  Only his fist.  His hatred.  His anger always aimed at him.

See how it all began in Nowhere to Hide

a Rafflecopter giveaway
Posted by Maria at Tuesday, July 26, 2016