Welcome to my stop on the Book Blast, presented by Goddess Fish Promotions, for Pure Temptation by Auria Jourdain.  Please leave a comment or question for Auria to let her know you stopped by.  You may enter her tour wide giveaway, where five (5) randomly chosen commenters will be awarded a digital copy of Pure Temptation and one (1) grand prize winner will be awarded a Print Copy of Pure Temptation along with a Swag Bag full of Goodies, by filling out the Rafflecopter form below. You may follow all of the stops on her tour by clicking on the banner above.  The more stops you visit, the better your odds of winning. 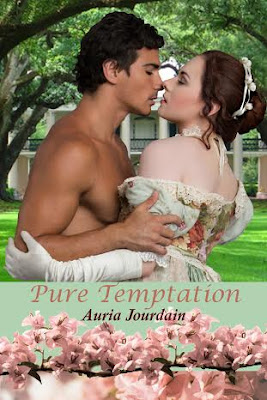 A rogue gypsy hired to kidnap a debutante Creole spying for the Cabildo government discovers they are both pawns in a dangerous Frenchman's game. Over land and sea, they discover the truth, but can they fight their uncontrollable desire for one another to save her family home?

Talia smiled from behind her parasol as Monsieur Barberry eyed her intently while doing his chores. For once, she found it pleasing to be ogled by a man. There was something foreign and exciting about him, more intriguing than her usual conquests. Most attractive heathens she came across were either arrogant and irritating or foppish and boring, like her friend, Alex Lafitte. Alex was adventurous, but that was the extent of his likability. As far as Talia was concerned, he was immature and not at all confident with himself as a man.

This Talon Barberry, now he was a real man—not just some barbarian like Ricardo had told her. Hadn’t he saved her in the slave hold out of a sense of honor? Talia hadn’t uttered ten words to him, but her heart raced as she regarded his mysterious, brooding façade. A sharp intelligence shone in his black eyes as he watched and marked everyone around him. At the same time, he showed a tender side, especially with the little slave boy. His camaraderie with the child was endearing, and Talia firmly believed that most children were good judges of character. 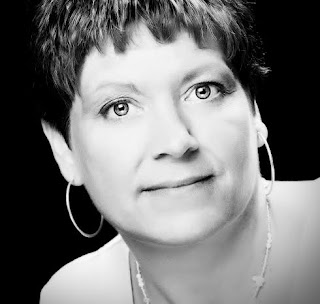 An avid reader from an early age, Auria Jourdain has fond childhood memories of spending quiet afternoons with a book in her hand. She loved the "happily ever after" sweet teen romances, and when she came of age, she plunged into the world of historical romance with fervor, transporting herself to a bygone time. Her favorites were Regency, but as a girl brought up in a common home, she was disheartened that most of the novels of this era focus on the nobility and wealth. Auria set out to write her own romance, encompassing her passion for French Revolutionary history and her innate sense of goodwill for the common man. An idealist at heart, she writes heroes and heroines that struggle to find acceptance in their world. Their differences" and their soul mates' complete acceptance of them are the embodiment of values that she holds dear, passed down to her by her father, a blue collar worker. She has an autistic son struggling to make his own way in the world. Looking to educate people about this mysterious disorder, she’s releasing a YA novel set in the U.P just for him during Autism Awareness month, April 2016. She hopes that someday we can break down the social barriers and forgo stereotypical judgments that harm our world.

Auria lives in the Upper Peninsula of Michigan with her husband of twenty years, her four children (ages eight to eighteen), and two golden retrievers. A rather new transplant to the area, she loves the changing of the seasons, and she is currently working on a contemporary romantic suspense trilogy set in her rough and rugged homeland. Silence the Northwoods is set at a local ski resort in her hometown of Ironwood, Michigan—the ski capital of the Midwest. Silence the Waters takes place during the summer on the dangerous river ways that flow into Lake Superior in the Keweenaw Peninsula; and Silence the Birchwoods is an autumn tale set on Sugar Loaf Mountain, near Marquette, Michigan. All three involve murder, mystery, and romance, of course.

Auria spends her the long winters plotting and scheming her next book, and in the mild summers, she and her husband spend every waking moment they can hiking and kayaking the Northwoods. An amateur photographer, she lives fifteen miles from the shores of Lake Superior, and her muse has been piqued by the awe-inspiring beauty that surrounds her. Although she hasn’t officially acquired “Yooper” status yet, she can’t envision living anywhere else.

a Rafflecopter giveaway
Posted by Maria at Wednesday, March 02, 2016