Welcome to my stop on the Book Blast, presented by Goddess Fish Promotions, for Eolyn by Karin Rita Gastreich.  Please leave a comment or question for Karin to let her know you stopped by.  You may enter her tour wide giveaway, where one (1) randomly chosen commenter will be awarded a $15 Amazon/BN GC, by filling out the Rafflecopter form below.  You may follow all of the stops on the tour by clicking on the banner above.  The more stops you visit, the better your chances of winning. 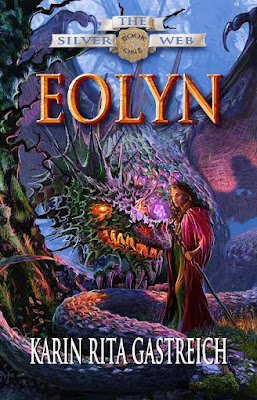 In a land ravaged by civil war, the Mage King Kedehen initiates a ruthless purge of the magas. Eolyn, last daughter of the magas and sole heiress to their forbidden craft, seeks refuge in the South Woods.

When she meets the mysterious Akmael, heir to the throne of this violent realm, she embarks on a path of hope, seduction, betrayal, and war. Desire draws Eolyn toward Akmael’s dark embrace, but fate binds her to Corey of East Selen, a cunning mage whose ambition challenges the limits of love and loyalty.

Can she trust either man?

Hunted in a realm of powerful wizards and brutal deceptions, Eolyn must find her own path to freedom or she will burn on the pyre.

Renate made Eolyn suffer more than the others, with constant rebukes and scoldings. This was the way of things for any new member of the Circle, but in Eolyn’s case the challenge was multiplied by the girl’s utter lack of experience. Corey would no doubt get an earful about it this evening, but Renate had no grounds for complaint. She had brought this upon herself.

“Have you gone completely mad?” Renate had cried, bursting into Corey’s tent the day after he hired Eolyn. “Putting that girl in your magic show?”

“I’ve been seeking an assistant for some time,” Corey had replied evenly.

“She’ll be on the pyre within a week, and the rest of us may very well burn with her.”

“She will not do any magic.”

“Even the illusion of magic could—”

“She will not perform any illusions.”

“Curse you, Corey! I am so weary of the risks you take.”

“You are free to withdraw from the Circle any time you please, Renate.”

Renate had set her lips in a thin line. Corey knew well the terror he invoked whenever he suggested she leave. Nothing waited for Renate outside of the Circle, save solitude and fear, the unending torment of all her ghosts from the past.

Renate’s tone softened. “Corey, please. She’s just a child. Don’t make her your toy in this.”

Toy? Was that what Renate thought?

“I can’t imagine what you expect to gain from this folly,” Renate insisted, “but that girl, that beautiful, innocent girl, could lose her life. Is that a fair price for your amusement?”

Corey could not very well argue with that.

Well, he could, but why upset Renate more than necessary? 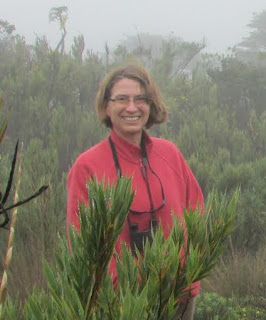 Karin Rita Gastreich writes stories of ordinary women and the extraordinary paths they choose. She lives in Kansas City, Missouri, where she is part of the biology faculty at Avila University. An ecologist by vocation, Karin has wandered forests and wildlands for over twenty years. Her past times include camping, hiking, music, and flamenco dance. In addition to The Silver Web trilogy, Karin has published short stories in World Jumping, Zahir, Adventures for the Average Woman, and 69 Flavors of Paranoia. She is a recipient of the Spring 2011 Andrews Forest Writer’s Residency.

a Rafflecopter giveaway
Posted by Maria at Thursday, March 31, 2016