Welcome to my stop on the Blurb Blitz Tour, presented by Goddess Fish Promotions, for Dreams of Her Own by Rebecca Heflin.  Please leave a comment or question for Rebecca to let her know you stopped by.  You may enter her tour wide giveaway, where one (1) randomly drawn commenter will be awarded a $5 Amazon GC, by filling out the Rafflecopter form below.  You may follow all of the stops on her tour by clicking on the banner above. 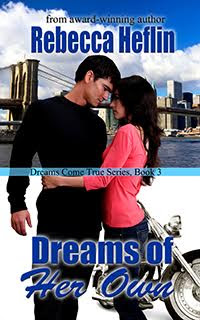 Dreams of Her Own
By Rebecca Heflin
Dreams Come True, Book 3

Can even the unlikeliest of dreams come true?

He sees a spinsterish misfit.

If the Guinness Book of World Records had a category for the world’s most boring life, Millie Stephens knows she would hold the record. After the plain, strait-laced personal assistant is saved by a total stranger from becoming New York City’s latest traffic fatality, she has a disheartening epiphany: her life’s highlight reel didn’t exist. Determined to step out of the shadows and take a walk on the wild side, she starts Millie-style – by making a list.

She sees a stereotypical thug.

That total stranger, bad boy Ian Brand, is more than the sum of his parts. Beneath that sexy, tattooed exterior is a man with a painful past who’s desperate to both hide and overcome his disability in the pursuit of his dreams. But his decision to bid on a large construction project could both lead to his downfall and reveal his secret.

Will Millie and Ian look beneath the surface and see there’s more to each other than meets the eye?

“Are you okay?” a gruff male voice asked, his breath warm in her ear.

She nodded, unsure if she could do any more than that.

“I’m going to set you back on your feet. Do you think you can stand?”

Nodding again, she realized the hard object at her back was a man’s chest, and the steel bands were his arms. She slid down his body and felt the sidewalk beneath her feet. A wave of dizziness washed over her.

“Breathe,” her rescuer encouraged. He turned her to face him, his hands on her shoulders, and she gazed up and into eyes the color of a winter-gray sky, earnest with concern. His already tousled brown hair ruffled in the wind whipping around the corner, and his chin bore the stubble so many women were fond of.

She inhaled deeply, drawing in the scent of something spicy and leathery. “Better?”

“You should always wait after the signal changes before you cross a street. I’ve got an appointment. You’re sure you’re okay?”

“Be more careful next time,” the stranger in the leather jacket said before he turned to walk away.

Millie managed to put one foot in front of the other for another block before coming to a bus stop and collapsing onto the bench. Her legs shook, her hands quivered, and she struggled to take in a deep breath. All she could think about was how your life was supposed to flash before your eyes when confronted with a near-death experience, and hers . . . didn’t. Instead it was like a film projector that had run out of film – just a blank screen.

What did that mean?

It meant, Millicent Grace Stephens, that your life has been so boring that the highlight reel was nonexistent. Her thirtieth birthday was right around the corner, and what had she accomplished with her life?
Not much, that’s what.

She recalled the hard strength of her rescuer’s chest against her back. The rough and tumble look of him. She’d bet her first edition autographed copy of Edith Wharton’s Age of Innocence, that his life wasn’t boring. That if he had a near-death experience he’d have a highlight reel worthy of an action movie.

Rising on still-wobbly legs, she drew in a long, slow breath, and resumed her errand in an I-almost-died daze. 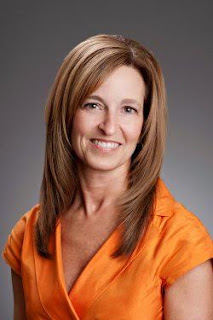