Welcome to my stop on the Virtual Book Tour, presented by Goddess Fish Promotions for Time is Relative for a Knight of Time by Brett Matthew Willliams.  Please leave a comment or question for Brett to let him know you stopped by.  You can enter his  tour wide giveaway, for a $50 Amazon or Barnes & Noble GC,  by filling out the Rafflecopter form below.  You can follow all of the stops on Brett’s tour by clicking on the banner above.  The more stops you visit, the better your odds of winning.

Have you ever thought about becoming a writer in Hollywood? I did. As a kid it was nearly all I could think about. So, in the Autumn of 2007 I applied for and was granted the first step in the screenwriter journey - an internship with NBC Universal. Specifically I worked at the co-run USA Network/ Sci-Fi Network in the original series/longform writing department. This date is important due to the WGA (Writers Guide of America) strike that went from October 1, 2007 through until late January of 2008.

After two seasons as both a production assistant with the crew, and an on-screen football player with NBC Universal's television adaptation of Friday Night Lights I threw everything I owned into my car and moved across country from Austin, Texas to Los Angeles, California. Driving to work every day, only to pass by the Hollywood sign was a dream come true, even if I wasn't technically getting paid. Don't get me wrong, the exciting world of organizing scripts and filling reports is super fun, but not nearly as fun as sitting in on cast table reads, new show pitches, and getting to see rough cuts of popular shows months before they air. I was so enamored with my new position at first that I almost missed what was going on around me.

The Writer's Guild of America, an excellent union to which I became a junior member of in 2004, went on strike approximately three weeks after I began my duties as intern at NBC Universal. It broke my heart because I truly believed in the WGA's cause. After the first two days of arriving to work to see picket lines formed I felt heartbroken at not showing any sort of unity toward these people. These were MY people! They were the group that I wanted to join someday! Would they hate me, or blame me for coming to work as an unpaid intern at the very place they were picketing? Worse, would they consider me a scab?!

The answer came in the brilliant form of an email by the 'wise' former/then president of NBC, Jeff Zuker. My then boss sent out a company-wide email explaining proper etiquette in dealing with the protestors. Chief among these were the following
At no time is any paid employee of NBC Universal allowed to engage the protestors by any means. This includes all forms of verbal and non-verbal communication.

Now, most sane people would read that and take it to mean that there will be no nonsense tolerated by the company. But I read that and realized that the rules, as explained by the president of the company, did not apply to me - an unpaid intern. So, on day #3 of the WGA strike of 2007 I, Brett Matthew Williams, during my lunch hour, took to the streets, holding up a street sign, and picketed my employer at 10 Universal City Plaza. Afterward I politely went back upstairs and went back to work, much to the dismay of many of the people I worked for/with.

This went on for about a week before Mr. Zucker saw me. While not a word was EVER mentioned to me later, I'm painfully aware of two things. #1- Jeff Zucker saw me picketing out on the street during lunch one day. #2 - He recognized me as someone who worked for NBC because he had come into The USA Network to complain about the season finale of Monk. Half of my co-workers thought that I was crazy while the other half expected me to be fired at any point. Hell, I expected to be fired at any point, and used the opportunity to apply for another job at NBC Universal - this time at the theme park as a 'scare-actor' for the Halloween Horror Nights. I ended up being cast as the silent film vampire Nosferatu for a season, walking around the park scaring people. But I digress - I was NOT fired from my position as intern and still allowed to continue picketing during my lunch break, which I did three or four times a week until the strike was over. I mean, what could they do? I was unpaid, and conforming with their policy.

So impressed were some of these Writers Guild members that I quickly became known amongst the studio groups as 'THE INTERN'. These were a great group of people, many of which I keep in somewhat regular contact with today. They have kicked numerous article, periodical, and opinion piece jobs my way in the subsequent years that I've easily been able to call myself a consistently employed writer ever since.

Fiction is a fickle beast. Most days the grind is similar to what it was at NBC Universal. The quotas, the interviews, hell, even the blog posts (like this one) are sometimes, good reader, a real strain on my patience. Never fear though, as this interview has been a pleasure. =-)

The big difference between the two jobs is that the subject matter I write these days is important to me and helps to ease my mind into sleep at night. If I could pass along any small bit of advice on the matter it would be this; do whatever exercises both your body and your mind while simultaneously plastering a smile upon your face. To me that's writing fiction. 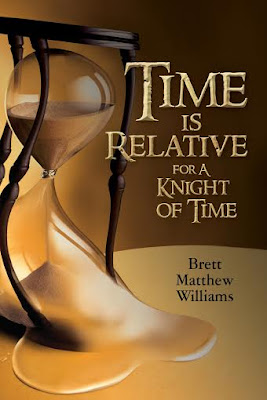 Meet Rolland Wright - a seventeen year old orphan living out of his car in rural Woodland Hills, California. Aside from grappling with the fact of being abandoned by his drunken father two years previous following his mothers mysterious murder, his life mostly revolves around finding a warm place to sleep at night. When one day he is attacked by men claiming to have killed his father, Rolland discovers a strange ability to slow the flow of time around him, beginning a journey that takes him to places outside of time, space, and eventually to the early 19th century to fight the sinister General Andrew Jackson.

With the help of a rag-tag group of historical and mythical figures with various supernatural abilities of their own (Joan of Arc, Jesse James, etc) known as the Knights of Time, Rolland solves the mystery behind his mother's murder, falls in love, battles the evil Edward Vilthe - reaper of souls, and finds a home of his own in the paradise known as Eden.


The Time is Relative series chronicles the origin story of the mythical figure Father Time, beginning with the award winning first novel, Time is Relative for a Knight of Time. All dates and events are historically accurate. The participants... maybe not.

It was a muggy, humid morning when U.S. General Andrew Jackson woke to the sound of tribal horns. Immediately identifying their purpose, he quickly gathered both his wits and his pants, grabbing his sword and sidearm as he left his tent.

Known to be tough as hickory, Andrew Jackson was a moderately tall man for his time, standing at six feet, one inch. In this and in his military rank he was often compared to George Washington among elite society in Boston, Washington, and New York, despite his humble beginnings.

Jackson’s rigid demeanor was only matched by his sharp attention to detail. His crisply, pressed uniform was such that it demanded the attention of all the company’s men. Each stood at full attention, showing perfect respect for their commanding officer as Jackson made his way through the columns slowly, careful to catch each and every pair of eyes.

“Today we fight like dogs, and live like kings!” Jackson roared to his men, who cheered loudly in response. Their gusto and appreciation for their General’s bravery in the face of danger was not unnoticed by his adversaries on and off the battlefield.

A slave, brought directly from Africa on Jackson’s orders, walked Jackson’s horse to him around the hustle and bustle of preparing for the day’s campaign. A light rain began to fall on the heads and shoulders of every soul under the barely visible sun, uniting them in nature. They all felt the soft droplets as they landed on both white and brown skin alike. Lightning struck diagonally across the gray sky, followed shortly by an attention-stealing clap of thunder that rocked the previously dry Florida landscape. 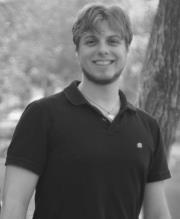 Brett Matthew grew up with a passion for both film and history. He began his career fresh out of high school as a Production Assistant/ football player on NBC Universal’s television series Friday Night Lights (of which he can often be seen in the first two seasons as a member of the championship team – Go Panthers!). He quickly moved on to serve as an Original Series intern with the USA Network in Studio City, California. Following work on shows like Monk, Psych, and Burn Notice, Brett returned home to Texas to continue his education, graduating with his degree in History from Texas State University. A proud Master Freemason, Brett thoroughly enjoys fantasy fiction, watching Netflix, running, baseball, Shakespeare, and spending time with his family and critters.

a Rafflecopter giveaway
Posted by Maria at Monday, July 13, 2015