Welcome to my stop on the Virtual Book Tour, presented by Goddess Fish Promotions, for Funny Fruit by Grant T. Reed and Gary C. Reed.  Please leave a comment or question for Grant or Gary to let them know you stopped by.  You can enter their tour wide giveaway, for a $15 Amazon or B&N GC, by filling out the Rafflecopter form below.  You can follow all of the stops on their tour by clicking on the banner above.  The more stops you visit, the better your odds of winning.

Me:  How did the two of you (Grant and Gary) decide to write two books or a series together?

It was around the year 2000 and Grant had just finished his first novel Shadow of the Makarios. I had no idea he was interested in writing, and I had never considered it myself (writing a whole novel). I read his book, thought he had something, but because my interests were in funny fantasy (Terry Pratchett at the time), I suggested we try our own hand at something humorous. It took some convincing, but after I showed him a chapter and some thoughts, he jumped on board.

Me:  Who writes what part?  How do you write the story together?  Physically together or over the internet?

After Grant joined me, we would discuss funny ideas or characters as we thought of them. Then we’d say something like “Okay I’m going to write the part with Milo and the circus performers.” Grant would say “Alright, then I’ll start chapter two.” The goal of course was to finish your section and see if you could make the other guy laugh. After he checked it and had a chuckle or two he’d add his 2 cents worth and it evolved from there. We wrote separately and hooked up after the fact to share.

3. Are you both full time writers or do you have day jobs and write part time or on the side?

Grant still writes part time, and I mostly focus on my nature photography now. I do have a photography book in the works with some of my award winning photos.

4. Are you both Canadian? Please tell us a small bit about your backgrounds.

We are both Canadian. I don’t think I’ve ever met twin brothers that weren’t off the same nationality... I guess it could happen if you were separated at birth.  We have been together since birth. Well together, but not like Siamese twins…if you know what I mean!

5. What drew you to writing fantasy?  Is it your preferred reading genre?

Gary: I have always enjoyed reading of wizards and warriors. It just seemed to be something that interested both of us.

Grant: Being twins, we always watched the same movies, played the same games, and read the same books. Fantasy movies, games and books were a large part of our life growing up.

6. Currently there are 2 books in the Vellian Heroes series.  Will there be more books in this series?  If yes, how many more are you currenty planning?

We have discussed a third book in the series that tells the story of what happens to Fonn and Yarl. Sort of the after years, when their students have been trained. Grant’s Vellian Mysteries are really the same series as well. They deal with the same characters, only 20 years after the first two books, when Garrett and Merle are private investigators. Grant has at least one more book planned in the Vellian Mysteries. He changed the name of that series, because of the time lapse, and the fact these are cozy mystery books.

7.  Who has been the biggest supporter of your writing career/dreams?

Our wives, without a doubt. They allow us to follow our dreams, work part time jobs, and are our biggest supporters.

Quick Get to Know You Questions

If money was not an object, where in the world would you like to visit and is there something specific that makes you want to visit there?

Gary: I’ll go anywhere any time. I’m always up for something new and to see new cultures.

Grant: I’ve never been on a trip, but I’ve always wanted to see Greece. The wife hasn’t shut up about Australia for 20 years, so I think I might have to go there first!! You know what they say about a happy wife…

What is your favorite childhood book?

Grant: Not sure I have a favorite, I really loved dog stories as a kid. 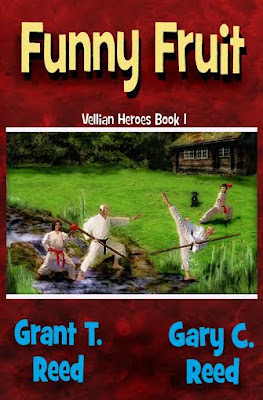 After ninety years of warring, exploring, and saving the realm, brothers Yarl and Fonn, must take up the title of Master again. If they don’t, someone else will surely steal all the fame, glory, and fertile women. How will they ever train new apprentices, save the kingdom, and still find time to fit in that extra order of chicken wings? Make no mistake, the old Masters have a lot to pass on and only a short timeframe to do it.

Will young Garrett flourish as an apprentice Sworvei? Can his partner Azilda master the ‘Nesting Nightingale’? And who in hell invited the ogres?

Join this rag-tag group of ‘Protectors of the Realm’ to see if they can pull off the biggest upset of the Continental Games, by saving young King Renli from the clutches of the evil First General.


Azilda tossed on her bunk, half asleep and yet half awake. A hand was pressed firmly over her mouth and she struggled to sit up. “Quiet,” cautioned Garrett removing his hand. Tugging on her undershirt, Garrett motioned for Azilda to follow him out of the cabin. The girl turned toward the two old masters as one of them ceased his barrage of grating exhalations, only to be overshadowed by his brother’s ear splitting, half-snort, half-wheeze.

Following Garrett through the cabin’s entrance, Azilda frowned as she realised the door was already unlocked and opened. Once outside, Garrett closed the door behind them and gestured for Azilda to continue along as he headed for the creek. Reaching the riverbank Garrett knelt beside a packsack and a bundle of clothes. Retrieving a pair of boots the old masters had brought for him, he sat down and pulled one on.

“What are you doing?” hissed Azilda kneeling beside the boy.

“Come on get dressed,” he whispered, finished tying his laces. “Those old men could sleep through a hurricane I think, but I still want a good head start.”

“Head start?” inquired Azilda feeling more confused than she wanted to admit. “Where are you going and why do you need a head start?”

Garrett surprised her by grabbing her wrist and moving in close to her. Looking into her eyes he seemed to age. “Big Kirk is out there and he’s looking for me. I won’t sit back and wait for him to come to me. I must find him.” 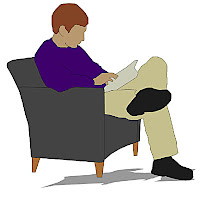 Grant Reed has a background in business management, computer programming, and computer networking. He would much rather be out fishing though, so he spends his time writing and exploring the lakes in his back yard of Canada. He lives in Lively Ontario, Canada with his wife Robin, and their two children Aidan and Megan.

Gary Reed, his wife Kerry and their two children, Hannah and Kailey also live in Lively Ontario, Canada. And yes, he spends his time exploring the countryside too. Photography, fishing, and playing with his girls are amongst his interests.

a Rafflecopter giveaway
Posted by Maria at Wednesday, July 08, 2015