Join author Sharon Pape on her Virtual Book Tour for Sketcher in the Rye, presented by Great Escapes Virtual Book Tours, from December 11 – December 23, 2013.  Please leave a comment or question to let Sharon know you stopped by.  Sharon will be giving away one (1) ebook copy of Sketcher in the Rye at this stop.  Please leave your email address with your comment in case you are the winner. 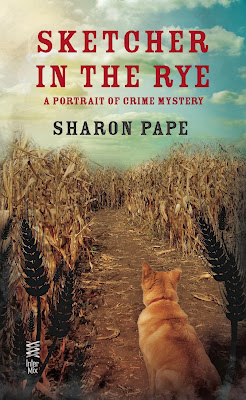 Sketcher in the Rye:
(A Portrait of Crime Mystery)
4th in Series
InterMix (December 17, 2013)
Published by The Penguin Group
E-Book Only
ASIN: B00AVA4NH0

In her new job as a private eye, former police sketch artist Rory McCain has a spirited partner: Old West marshal Zeke Drummond. He may be a ghost, but when these two combine their skills, they reap justice…

Trouble has sprouted at Harper Farms. Top secret info has been leaked to the competition, and now there’s serious sabotage cropping up. So the farm’s beleaguered owner, Gil Harper, has called on Rory to dig up some dirt. But what Rory discovers raises a new field of questions…

Someone shucked Harper’s accountant and left his body in the farm’s corn maze. While Gil is quick to hire Rory to solve now not one but two crimes, the sketching sleuth isn’t so sure why the farmer wants her to focus her attention on his own family.

Regardless, Rory and Zeke will need to put their hands to the plow and solve this case before someone else is planted six feet under…

Maria, thank you for inviting me and my partner Zeke Drummond to stop by today. We're from the "Portrait of Crime Mysteries" by Sharon Pape. Since Sketcher in the Rye, the fourth book in the series, was released a few days ago, I thought readers might enjoy learning a bit more about Zeke through an interview. Before his death in 1878, Zeke was a federal marshal for the Arizona Territory. I first met him when I inherited my uncle's beautiful, old Victorian, which came complete with the marshal's ghost. As you can imagine, living with the marshal took quite an adjustment on my part, and things were pretty rocky for a while. But since I was a sketch artist with the police department, and Zeke had been an officer of the law, we managed to find enough common ground to work together and even open a private investigating firm.
If you've been following our story, you know the marshal doesn't like to talk about his past, so it wasn't easy to convince him to do this interview. Here's how it went:
Rory:  Why did you decide to become a federal marshal?
Zeke:  When I was a kid, the marshal was a guy by the name of Corely - William Corely. Everyone in town respected him, except for the few who figured the law didn't apply to them. He traveled the Territory pretty much by his own timetable, had the respect of good men like my father and brought murderers and thieves to justice. What better way to spend my life, since I knew early on that I didn't want to be a farmer like my father or a shopkeeper.
Rory:  When you were alive, what was your favorite meal?
Zeke:  That's an easy one - a thick steak with mashed potatoes, biscuits and gravy and my mom's apple pie for dessert. That kind of meal could make a bad day good.
Rory:  What do you like best about the twenty-first century?
Zeke:  Nothin'.
Rory:  Now you're just trying to be a curmudgeon. There has to be something you wish you'd had when you were alive.
Zeke:  Computers, maybe. They make it easier to get information. But it's a tradeoff.
Rory: What do you mean?
Zeke:  Folks today spend so much time hooked up to their gadgets, they're losin' touch with themselves, you know - basic stuff like their instincts, hunches.
Rory:  How old were you when you had your first kiss?
Zeke (scowling):  That's an awfully personal question.
Rory:  It's really not considered all that personal today.
Zeke(grumbling):  Doesn't surprise me. But I expect you're not going to let this go until I answer you.
Rory smiles.
Zeke:  Fine - I was fourteen.
Rory:  And where did it happen?
Zeke:  I can't see why that would matter to you, but it was behind a church in Tucson.
Rory:  And how did it go?
Zeke:  Not well if you must know.
Rory:  Why - what happened?
Zeke:  Just as I leaned in to kiss her, she turned and I ended up kissin' her eye.
Rory stifles a laugh.
Zeke:  It wasn't funny. I was tryin' to be real macho about it, so I came down pretty hard on her eye. When she showed up at school the next day she had quite a shiner. She didn't talk to me for the rest of the year.
Rory:  Were you married to your career or did you want to find the right woman and have a family?
Zeke(sharply) :  What difference does that make now?
Rory:  It's a piece of the Zeke Drummond puzzle.
Zeke (vanishing as he speaks):  That's it; we're done. I'm not just another mystery for you to solve.


I guess I hit a raw nerve with that last question.  I can't say that I'm surprised. The marshal is very sensitive about his past. But what's the point of an interview if you can't probe a little? 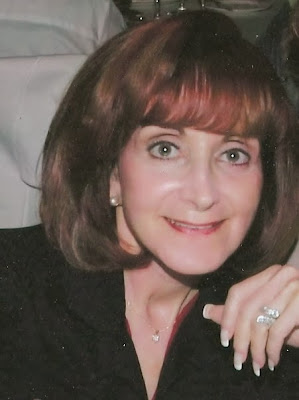 I started writing stories as soon as I learned how to put letters together to form words. From that day forward, writing has been a part of my life whether it was my first attempt at a novel in seventh grade or the little plays I wrote for my friends to perform for neighbors and family. After college, when I was busy teaching French and Spanish to high school students, I was also writing poetry — some of it in French.

After several years, I left teaching to be a full time mom, and when my two children started school, I went back to writing. To my delight I found that the muse was still there, still waiting patiently for me to come around. My first novel, Ghostfire, was published at that time. It went on to be condensed in Redbook magazine (the first paperback original the magazine had ever condensed.) Then came The God Children and The Portal. Redbook also published my first short story, which was subsequently sold to several foreign magazines. With two great kids, a golden retriever and a loving, supportive husband (whom I’d met at the beach when I was fourteen — but that’s a story for another day), I felt like I was exactly where I was meant to be in my life. But fate had another plan for me, and it went by the name of “breast cancer.”

Looking back, I realize how fortunate I was that the cancer was discovered at such an early stage, but at the time it was all very overwhelming. Once I was back on my feet, I wanted to help other women who were newly diagnosed, worried and afraid. I became a Reach to Recovery volunteer for the American Cancer Society and went on to run the program for Nassau and Suffolk Counties on Long Island. A number of years later, with the help of my surgical oncologist and two other volunteers, I started Lean On Me, a nonprofit organization that provides peer support and information to breast cancer patients. When Lean On Me celebrated its tenth anniversary it no longer required as much of my time, and I once again found myself free to pursue my first love — writing.

Find out more about Sharon and her books here: http://www.sharonpape.com/index.html

A murder mystery, a budding romance and an opinionated partner, who’s a ghost, all play a part in Sharon Pape’s Sketcher in the Rye, the newest addition to her Portrait in Crime series.  The fourth book in the series, and the first book of Ms. Pape’s I’ve read, is well written, filled with interesting characters and a touch of comedy.  If you’re looking for a cozy mystery series to check out, add this one to your list.

Asked to investigate how top secret information at Harper Farms is being leaked to the completion, Rory McCain becomes involved in another murder investigation when she discovers a dead body in the middle of the farm’s corn maze.  The dead body is none other than Matthew, a long time friend of owner Gil Harper, and an employee of Harper Farms.  Determined to uncover the truth, Rory and her secret partner, the ghost of Old West marshal Zeke Drummond, find themselves pushed to investigate everyone in Gil’s family since he no longer knows who he can trust.

Ms. Pape does a good job developing both Rory and Zeke’s characters throughout the book and their engaging dialogue is very entertaining.  Their interesting relationships is definitely an appealing part of the book as are Zeke’s observations and reactions to the people involved in Rory’s life.  His eactions to her new romance and her continued friendship with Eloise, the next door neighbor having visions about Zeke’s past, were highly entertaining.  I also enjoyed reading about Rory’s escapades with Hobo, her dog, and his interspecies attraction to one of the piglets at Harper Farms.

Will Rory and Zeke be able to uncover who’s leaking secrets before anybody else gets hurt?  Will Rory get Zeke to tell her more about the secrets in his past?  You’ll have to read Sketcher in the Rye to find out.  I enjoyed it and intend to read the previous books in this series.

FTC Disclaimer: I received a complimentary copy of this book from Net Galley and the publisher in exchange for a fair and honest review.