Review Tour & Giveaway for Sunrise Over Brasov by Stephanie Burkhart 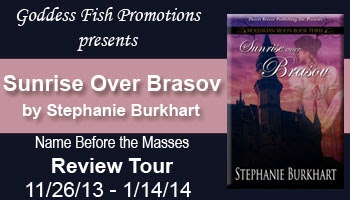 Join author Stephanie Burkhart on her Name Before the Masses Review Tour for Sunrise Over Brasov, presented by Goddess Fish Promotions, from 11/26/13 – 1/14/14.  Please leave a comment or question for Stephanie to let her know you stopped by.   Stephanie will be awarding A Sunrise Over Brasov Coffee and Chocolate Basket (which includes a Coffee Mug, Starbucks gift card, Andes Chocolate, magnets, and Lori Powell original book bag) to one randomly drawn commenter during the tour.  You can follow the rest of Stephanie’s tour here, the more stops you visit the better your odds of winning. 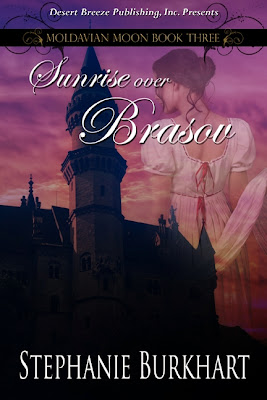 Rosa Getzi lives a life of intrigue at Poiana Brasov with Clement, a werewolf, and Cassandra, the witch. Her past doesn't matter to her – until she discovers what it holds.

Prince Michael Sigmaringen joins his sister-in-law, Caroline, and the vampire prince, Darius, in a daring rescue, igniting Rosa's desire to find her family. However, all is not as it appears. Rickard, Rosa's friend, escapes with her. Clement will go to any lengths to get Rosa and Rickard back.

At Darius' fortress, Michael soon discovers Rickard is a new breed of werewolf – one who can control the change, and Clement hopes to exploit Rickard's abilities.

Michael's courage, strengths, and convictions will be tested like never before. Can Michael and Rosa find true happiness and the rid the lupine haunting of the Sigmaringens once and for all?

Some inner voice encouraged her to leave with him. It was the right thing to do. "Turn around," she said quietly.

"I don't trust you." His reply was quick. "Leave your chemise on." He walked to the window and glanced outside, then checked his pocket watch.

Rosa figured that was the most privacy he was willing to afford her and unfastened her robe. Quickly, she stepped into the winter dress without putting on a corset. "I need you to lace up the back."

Michael approached and tied up the stays with familiar ease. There was that word again -- familiar. Rosa shivered. What did it mean? How was he familiar when she couldn't recall seeing him before? She found her boots and slid them on. They were lined with fur and went up to her knees. She couldn't articulate her compliance, but could say an instinctual desire drove her to do his bidding. Yes, there were clues, but no easy answers.

He was a witch, like her. She responded to his kiss, enjoying it far too much, though she wouldn't admit that to him. He hadn't hurt her, and he knew her mother. The thought of finding her mother filled her with a sense of comfort. In all honesty, Rosa, however, couldn't remember her life before coming to Poiana Brasov, but she hated to think that Clement and Cassandra, who had been so kind to her, had deceived her. Rosa wouldn't deny her instincts and decided to follow the clues. When there was a minute, she intended to get her answers from Michael.

Her boots secure, she slid her arms into her winter coat. Michael grabbed a scarf and gloves from a shelf in her closet, presenting them to her. His face betrayed nothing -- not one hint of pleasure or dissatisfaction. Instead, he grabbed her gloved hand and led her out of the room.

Rosa noticed the noise continued outside of the fortress. Just on the other side of her door, Andrei lay crumpled on the ground. His chest rose and fell. Thank Corvinus he appeared to be sleeping.

Michael moved with unnatural speed. His grasp on her hand was tight, tugging her behind him. They proceeded down the hall toward the servants' staircase.

The inner fortress remained quiet. Several candles in wall sconces had burnt down to the stubs, casting long, inky shadows over the stone walls.

Reaching the staircase, Rosa paused. "I need to check on Rickard."

"There's no time. We delayed too long as it is." Michael dragged her down the stairs. 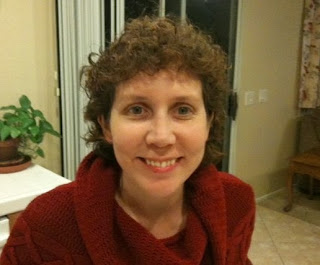 Stephanie Burkhart is a 911 dispatcher for LAPD.  She was born and raised in Manchester, New Hampshire.  She served 11 years in the US Army and currently calls Castaic, California her home. Stephanie was married in Denmark in 1991 and has two young sons. She adores chocolate and is addicted to coffee.  She writes paranormal, contemporary, and steampunk romance and has two children's books published with 4RV Publishing.

FIND ME ON THE WEB AT:

A cross mixture of paranormal mystery and historical romance, Sunrise Over Brasov, the third book in the Moldavian Moon series by Stephanie Burkhart, has interesting characters and a solid mystery.  Set during the mid-1850’s, after the Gypsy people of Romania had been set free, Ms. Burkhart’s story deals with the rise of a new breed of werewolf, one who can control the change instead of being forced into it by either witchcraft or the moon, and the struggle to determine who will control them. .  While I have not read the previous two books in the series, I was able to read this book on its own.

Unaware of her own history, Rosa Getzi has been living at Poiana Brasov and assisting Clement, a werewolf, and Cassandra, a witch, with their studies of the supernatural.  When a man breaks into her room at night and demands she accompany him into the woods, she’s reluctant to follow him until he begins to tell her about her past and of how her family has been trying to locate her.  While she’s not comfortable trusting a stranger, he seems very familiar to her and his kisses ignite her passions.

Breaking into Poina Brasov to free the woman he loves, Prince Michael Sigmarigen is disheartened  when she doesn’t recognize him and doesn’t know her real identity.  Determined to reunite her with her family, and improve on their previous relationship, Michael is able to convince Rosa into escaping the castle with him.  Rejoining Caroline, his sister in law, and Darius, a Vampire prince, they are able to make their escape.  They are also  unknowingly being followed by Rickard, a friend of Rosa’s also imprisoned at Poiana Brasov, who has some startling paranormal abilities and who refuses to be left behind.

While Michael and Rosa have to work through the issues of her past, they also find themselves drawn into solving the mystery of how Rickard is able to control his shape shifting abilities; he’s the first werewolf they’ve encountered who is not tied to the moon’s phases.  Something that Clement and Cassandra were determined to discover before he escaped with Michael and Rosa.   Ms. Burkhart’s world building is very interesting and I liked how she deals with all of the characters who make an appearance.

Will Michael and Rosa be able to forge a true and strong relationship once Rosa’s memories are recovered?  Will Rickard be able to help them get rid of the curse that affects their families?  You’ll have to read Sunrise Over Brasov to find out.  While I was able to read this book by itself, I do recommend that you read the rest of the series to get a better understanding of the history of the characters and the mystery they end up working to resolve.  I’m pretty sure I would have enjoyed this more if I had read the previous books first.

Don't forget to leave a comment or question for Stephanie to let her know you stopped by.   Stephanie will be awarding A Sunrise Over Brasov Coffee and Chocolate Basket (which includes a Coffee Mug, Starbucks gift card, Andes Chocolate, magnets, and Lori Powell original book bag) to one randomly drawn commenter during the tour.  You can follow the rest of Stephanie’s tour here, the more stops you visit the better your odds of winning.
Posted by Maria at Tuesday, December 31, 2013