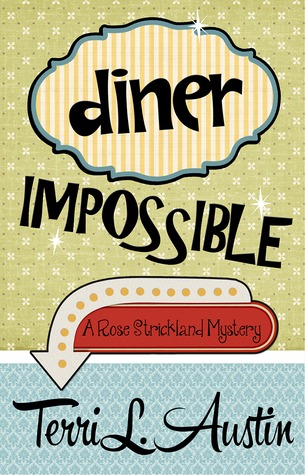 After shunning her overbearing parents' wealthy lifestyle, waitress and part-time college student, Rose Strickland, is drawn back into their world when she tries to prove the impossible: the innocence of the town's crooked police chief. He's suspected in the gruesome death of Delia Cummings, his secretary and mistress, and all the evidence points to him.

While she tracks down clues with the aid of her anime-loving bestie, Rose's pal, Axton, and his Klingon gang are feuding with their Starfleet rivals. Things get hairier than a pile of well-fed Tribbles, so Rose gets involved. In between interrogating Trekkies and quizzing socialites at high tea, she discovers the secrets Delia Cummings took to her grave.

Suspects abound, but when Chief Mathers threatens to bring down Rose's criminally mischievous and maybe boyfriend, Sullivan, she makes it her mission to find the real killer before Sullivan finds himself in prison.

Having proved herself as an amateur detective in Diners, Dives & Dead Ends and Last Diner Standing, waitress and part time college student Rose Strickland once again finds her skills on demand in Diner Impossible, the third installment in Terri Austin’s Rose Strickland Mystery series.  Although she's rejected her parent’s affluent lifestyle, and chosen to make it on her own, Rose gets dragged back into their high society world when crooked Police Chief Martin Mathers becomes the prime suspect in the gruesome murder of his secretary and mistress, Delia Cummings.  While Rose could say no to officer Andre Thomas’ (aka Officer Hard Ass) request for help, she can’t say no to Barbara Strickland, her mother, who’s determined to prove her friend’s husbands innocence.

Meanwhile back at the diner, fellow waitress and best friend Roxy Block is angry and hurt over being dumped by her last boyfriend and Ma has decided to join Rose’s pal Ax and the rest of the Klingon Alliance of Warriors (Star Trek fans) on their annual laser tag battle with the SPURTS, a rival gang of Star Trek fans.  When the rivalry between the two Star Trek fan groups gets ugly, and a prized “Star Trek Uniform” goes missing. Ax, Ma and the rest of Ax's friends beg Rose and Roxy to locate the missing item and help negotiate peace between the two groups.

Ms. Austin does a wonderful job with all of the characters as this series continues.  It was a hoot watching Rose deal with her bossy, waspish mother and sister, and all of the high society functions she was forced to attend in order to get clues about Delia’s life, while at the same time trying to remain true to the person she’s become.  I particularly enjoyed the scene in Rose’s sister’s closet, when Rose realizes she needs to get some new and sexier underwear to add a little more sizzle to her almost relationship with Sullivan, her criminal would be boyfriend.  I also enjoyed watching Rose be there for Roxy and help her realize that she’s too awesome to wait for some loser ex to get a clue.  Helping Roxy want to move on was really well done.

As Rose’s investigation gets deeper and deeper into Huntinford’s high society, and she realizes there are plenty of would be criminals who belong to the country club, she finds herself crossing paths with Chief Mathers, who’s quick to point out that if he goes down for Delia’s murder, he’s more than willing to take every other corrupt person he knows down too, including Sullivan.  Now with more incentive than ever, Rose and her friends are pushed to the limit to find out which of the people that wanted Delia dead had the best opportunity and the best motive.

Will Rose discover who killed Delia before anyone else is killed in the crossfire?  Will Rose and Sullivan finally decide to make their almost relationship something more?   You’ll have to read Diner Impossible to find out, I think it’s a great addition to the series and can’t wait to see what Ms. Austin has in store for us next.   I just hope we don’t have to wait too long to find out (Yes, I’m greedy that way).

FTC Disclosure:  I received a complimentary copy of this book courtesy of the publisher via NetGalley.
Posted by Maria at Monday, December 23, 2013