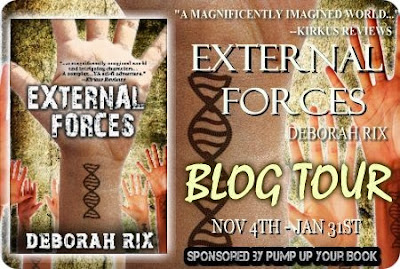 Join author Deborah Rix on her Virtual Book Tour for External Forces, presented by Pump Up Your Book! Please leave a comment or question for Deborah to let her know you stopped by.  You can enter her tour wide giveaway by filling out the Rafflecopter below.  You can also follow the rest of her tour here, the more stops you visit, the better your odds of winning. 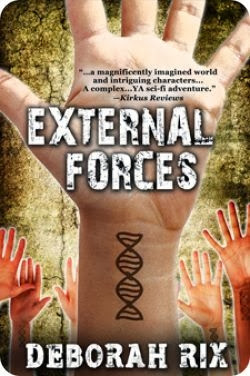 Purchase at AMAZON or BARNES & NOBLE

It’s 100 years since the Genetic Integrity Act was passed and America closed its borders to prevent genetic contamination. Now only the enemy, dysgenic Deviants, remain beyond the heavily guarded border. The Department of Evolution carefully guides the creation of each generation and deviations from the divine plan are not permitted.

When 16-year-old Jess begins to show signs of deviance she enlists in the Special Forces, with her best friend Jay, in a desperate bid to evade detection by the Devotees. Jess is good with data, not so good with a knife. So when the handsome and secretive Sergeant Matt Anderson selects her for his Black Ops squad, Jess is determined to figure out why.

As her deviance continues to change her, Jess is forced to decide who to trust with her deadly secret. Jess needs to know what’s really out there, in the Deviant wasteland over the border, if she has any hope of making it to her 17th birthday. Because if the enemy doesn’t kill her first, the Department of Evolution probably will.

I haven't slept in forty-eight hours.

It's part of the Special Operations Assessment and Selection course, twenty-eight days of grueling work. The two days of no sleep are meant to disorient us, part of discarding our former selves. There are three hundred of us trying to figure out how to do what we're told, when we're told to, and how to do it correctly.

Jay and I weren't assigned to the same platoon, which was unexpected. I’m in the “civilian” platoon; we’re the ones with skills that don’t generally require brute force. I think Jay is in some kind of elite group because I haven’t seen him, I’ve only seen the G-men platoon. They are all about brute force; they’re the ones that opted for genetic enhancement at age thirteen without the supervision of the Devotees. But Special Forces is, well, special, so they have to prove they’ve got more than muscle and I’ve gotta prove I’ve got more than a quick mind.

If I don't make it to Special Forces, my life expectancy in the regular army could be pretty short. And if I’m a complete washout, I’ll have to go to my assessment with the Devotees and they’ll find out about me, making my life expectancy even shorter. I seriously need to pass.

Zero dark thirty is when I have to haul myself out of bed in the so-called morning. My drill sergeant has been yelling at me for most of the past two days. The word “why” has been surgically removed from everyone's vocabulary. Any individual hesitation in following orders means at least one private is getting smoked, if not the whole platoon, which usually means push-ups. We've done a lot of push-ups. I stare straight ahead as the drill sergeant walks by me and continues down the row of privates. I made the mistake of “eyeballing” him yesterday.

Discuss this book in our PUYB Virtual Book Club at Goodreads by clicking HERE.

Deborah Rix’s favourite position for reading a book is head almost hanging off the couch and feet up in the air with legs against the back of the couch. She’s been reading too much from Scientific American for research and ideas and needs to get back to some fiction. She has a long standing love of science fiction, some of her favourite authors include William Gibson, Philip K Dick, Kurt Vonnegut Jr, Douglas Adams, Iain M Banks. 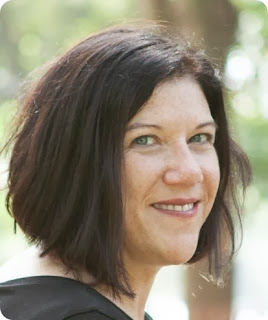 A bit old school. Deborah enjoyed a successful career in entertainment publicity, live music promotion and event management. Which means she slogged through muddy fields for music festivals, was crammed into concert halls with too many sweaty teenage boys and got to go to Tuktoyaktuk (that’s in the Arctic Circle) for a Metallica concert. She lives with her family in Toronto, Canada, where she is the proprietor of The Lucky Penny, a neighborhood joint in Trinity-Bellwoods.

External Forces is her first novel.   Visit her website at www.DeborahRix.com. 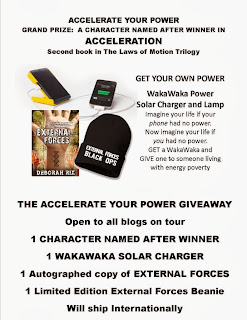 GRAND PRIZE: Winner will have a minor character named after them in Acceleration, the second book in The Laws of Motion Trilogy by Deborah Rix. PLUS: 1 (One) WakaWaka Power – a solar powered charger and light, 1 (one) Limited Edition EXTERNAL FORCES Black Ops Beanie, and 1 (one) signed copy of External Forces.