Welcome to my stop on the Virtual Tour, presented by Great Escapes Virtual Book Tours, for The Vanished Bride of Northfield House by Phyllis M. Newman.  Please leave a comment or question for Phyllis to let her know you stopped by.  You may enter her tour wide giveaway by filling out the Rafflecopter form below. You may follow all of the stops on the tour by clicking on the banner above.  Good Luck!

SETTING:  MORE THAN A PHYSICAL LOCATION
BY PHYLLIS NEWMAN

Setting is always a challenge. Just as popular story lines are told again and again in unique ways, popular locations need to be described from fresh, interesting perspectives.

As exciting as Liverpool, London or a manor house seated in the English countryside may inherently be, your reader most likely has read descriptions of them numerous times before.  Which means writing about them in inventive and imaginative ways is essential.

I try to present my scenes with originality: exciting metaphors, descriptive words used in unique ways, or from a different perspective (from a crack in the floorboards? from a window? from a dusty corner?)

In THE VANISHED BRIDE OF NORTHFIELD HOUSE, the gently rolling English countryside with its soft morning fog and hazy sunshine hides haunting secrets and terrifying deeds. The juxtaposition of soft and quiet scenes and the stark details of murder jar the senses and make for excitement in the story.

Though the reader has to know where the characters are (whether in the garden, the greenhouse, or the study) setting is more than orientation and backdrop. Setting has to reflect a time and a culture to unify a story. It should evoke the mood of the story you are creating, and emphasize the themes. It should add depth to the characters and their behaviors.

THE VANISHED BRIDE OF NORTHFIELD HOUSE offers a gothic romance played out against a background of the social and political upheaval following The Great War in Great Britain, and provides a journey into the macabre with a determined heroine.

In my own writing, I like the places where the action happens to play such an integral role that it functions like one of my characters, reflecting the mood of the scene or the inner turmoil of the protagonist.

Spare, effective words defining a place create a mood related to the story, its theme, its characters, and their actions and emotions. The encounters between Anne and Owen, who circle one another with romantic interest from the beginning, have a different tone depending upon whether it takes place in a sunny garden or the moonlit library in the dead of night.

The final challenge an author faces is to not overwhelm the storyline with the setting. The reader doesn’t need full-blown descriptions of sight, sound and smell in every instance. As long as the setting provides a uniqueness that cannot come out in dialogue or action alone, it is doing an effective job!

The Vanished Bride of Northfield House

Times are hard. Anne Chatham is a clever, modest young woman with little money, no prospects for marriage, and a never-shared secret—she can see spirits.

Anne finds employment as a typist at Northfield House, the grand country manor of the Wellington family. Her employer, the wheelchair-bound Mr. Wellington, is kindly. His haughty wife is not. He has two handsome sons, the wry and dashing Thomas and the dark and somber Owen.

Anne feels sure her prayers have been heard. Until the terrifying night, she stumbles upon a tortured spirit roaming the dark halls of Northfield, a spirit that only she can see.

In a search for answers, she finds herself drawn to Owen as they unearth a tragic story from the Wellington family’s past—a beautiful young bride gone missing on her wedding day.

Then tragedy strikes again on the night of a glittering masquerade ball...

I heard scratching—fingernails or claws or beaks on wood.

I waited for the thumps and scratches to begin again, but heard only Owen’s rapid breathing. His grip on my shoulder softened.

Before we could step away from each other, I heard something else. Whispers. Not words, but sibilance. A faint weeping.

I could pretend no longer that the sounds issued from an animal. Owen shuddered, and I tried to swallow. My sight darted from the floors to the ceilings, from corner to corner, searching for additional signs. I saw none.

The bed, its elaborate draperies, and the pictures on the walls were all undisturbed, but a plaintive lament—a mournful sobbing—suddenly filled the space.

When the weeping stopped, I found my hand pressed against Owen’s chest. I could feel his heart beating, hard and fast, under my palm. “I think it’s over,” he said, releasing my shoulders. I reluctantly withdrew my hand and took a step away.

Phyllis M Newman turned to writing mysteries after a career in finance and human resources. She lives in Columbus, Ohio in a big house with a weed-filled yard, three strong-willed cats, and a husband that's easy on the eyes. 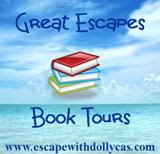 Have you signed up to be a Tour Host?
Click Here Find Details and Sign Up Today!
Posted by Maria at Wednesday, February 07, 2018