Book Tour & #Giveaway for The Kingdom by J.R. Mabrey

Welcome to my stop on the Book Tour, presented by Silver Dagger Book Tours, for The Kingdom by J.R. Mabrey.  Please leave a comment or question for J.R. to let himi know you stopped by.  You may enter his tour wide giveaway by filling out the Rafflecopter form below. Good Luck! 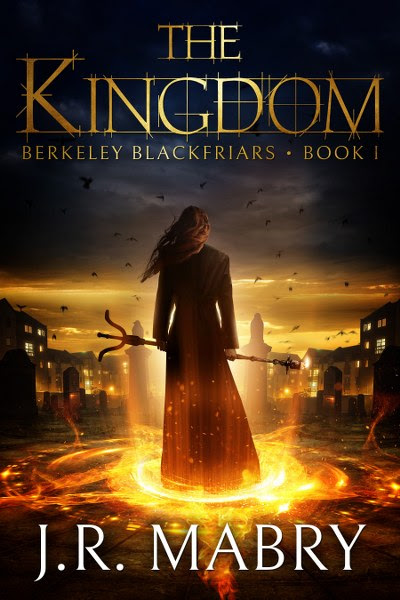 An unhinged tycoon.
A lodge of evil magicians.
A plan to steal every child from the face of the earth…

When Kat Webber discovers her brother’s comatose body in the midst of a demonic ritual, she knew she was in over her head…

Fr. Richard Kinney is having a crappy week. He’s not at all sure he’s the best leader for the demon-hunting Berkeley Blackfriars, and his boyfriend has just broken up with him. But when a violent demon possesses one of the richest men in the world, Richard doesn’t have time for self-pity.

Kat and the Blackfriars discover their situations are entertwined—leading them to a lodge of black magicians who make every avocado in the world disappear. Their dark power growing, they eliminate every dog from existence.

The Kingdom is the first book in the Berkeley Blackfriars series. If you love supernatural suspense laced with humor and danger, you’ll love J.R. Mabry’s Berkeley Blackfriars’ books. Fans of Buffy the Vampire Slayer, Preacher, The Dresden Files, and the Mercy Thompson series will thrill to this new paranormal fantasy adventure.

When the demon appeared, Randall Webber nearly jumped out of his skin. He was an experienced magickian, but the appearance of an infernal dignitary is never a commonplace event, and it shook him every time. He knew that if he stepped even momentarily outside the circle he had painstakingly burned onto his hardwood floor the demon would be at his throat, and in an instant would separate his soul from his body and devour it—or worse.

Webber mustered his courage and put on his best poker face. He was in control here, he told himself. He was the magickian. He called the shots. He commanded the hosts of Hell. He wiped the sweat from his forehead and upper lip and then put his hand in his back pocket to stop it from shaking.

The demon did not speak but appeared in the form of a dragon. It hovered as an image cast upon a small paper triangle about the size of Webber’s fist, set safely outside the circle on an end table. The dragon uncoiled its tail in slow motion, gold-flecked pupils staring straight into Webber’s own. Webber gulped and willed his voice not to waver as he spoke.

“Greetings, noble Articiphus, commander of many mighty hosts, Duke of Hell. I acknowledge thee and bid thee welcome. I command thee by the holy Tetragrammaton to assume thy human form and speak with me!”

So far, so good, Webber thought. He was still in one piece; the demon was still constrained within the folded paper triangle, and he thought he had just given a flawless performance of a man in command of himself. He fought the urge to run through his mental checklist to make sure he had not forgotten anything. One missing link and the whole house of cards would come tumbling down and he would be demon chow. He fought the urge. He had been careful, and if he had missed anything it was too late now to do anything about it. Right now, he needed to focus.

The triangle shimmered, and a regal-looking gentleman hovered in it dressed in ermine and satin. One half of his face was serene, the other horribly scarred. A diadem sat upon his head, and his face bore a resentful scowl. Nobody likes to be told what to do, Randall thought, least of all a man of power—or a being of power.

The demon interrupted him impatiently. “Cut the shit, Magickian. What do you want?”

Randall’s eyes widened. He pushed a lock of long brown hair out of his eyes and consciously straightened his perpetually stooped shoulders. He was expecting the typical exchange of ritual pleasantries, a ping-pong volley of testy manners conducted in Elizabethan English, but he had never summoned this particular spirit before. This one, apparently, had no time—or patience—for small talk. Very well, Randall thought, let’s just cut to the chase. “Is it true, noble Duke, that you have the power to remove souls and put them in other bodies?”

Whether the demon’s voice was audible or whether it merely resonated in his mind, Randall couldn’t tell. It had an odd quality about it as if Randall were wearing headphones. There was no resonance in the room, so it was hard to tell. He dismissed the thought as irrelevant and willed himself once more to focus. The words were clear, regardless of their source. The big question had just been asked. And for a demon in a hurry to be rid of this pest of a human, Articiphus was certainly taking his time replying.

The demon’s eyes narrowed, and he looked like he was trying to stare past the magickian. Randall stole a glance behind him, but there was nothing. Out the window he could see drizzle swirling around a streetlamp, forming wispy ghosts that, he prayed, were neither conscious nor malevolent. In this business, however, one could never be sure.
Randall shifted nervously, noting that the meat of his thigh seemed to have gone numb. He slapped it with the flat of his hand. “What say you, noble Duke?” he called, with a note of impatience.

“I. Can.” The demon let the two words drop like ice. He squinted at the magickian. “You want to share a body with another soul.” He spoke it as a statement, but a raised eyebrow indicated that it was more of a question of clarification.

“Neither one,” Randall said. He forced all the air he could into his lungs, expanding them as far as they would go given the acrid sting of the incense that hung as thick in the air of the apartment as the fog outside. “The being I want to swap bodies with is…not human.”

The demon opened his mouth to speak but then closed it again, furrowing his brows instead.

“Oh yeah,” Randall added. “When I go, I need to take this with me.” And he held forth a purplish-green fruit.

“What are you going to do with an avocado?” asked the demon, now truly curious.

Suddenly, Webber was not nervous at all. He knew what he had to do, and he knew he had the means at hand to do it. He didn’t answer the demon but only smiled. 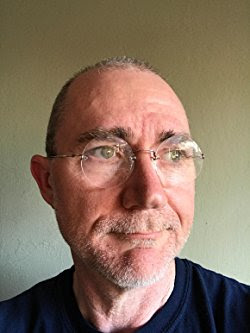 J.R. Mabry roams the earth like the ghost of Jacob Marley, searching for the perfect omelet pan. He writes thoughtful urban fantasy and science fiction. When not haunting high-end cooking stores, he lives with his wife and three dogs in Oakland, CA. He is allergic to coffee, tea, and alcohol, and for this reason the hills resound with his lamentation. He is also generally a cheery guy.

Check out the relaunch of The Kingdom, out now from Apocryphile Press. The relaunched The Power will be out next month, followed by the all-new The Glory—also known as the Berkeley Blackfriars series. The Berkeley Blackfriars aren’t your ordinary priests—they curse like longshoremen and aren’t above the occasional spliff or one-night-stand. But if you’ve got a nasty demon on your ass, they’re exactly the guys you want in your corner.

Follow the tour HERE for exclusive excerpts, guest posts and a giveaway!