Spotlight & #Giveaway for Survive the Night by Katie Ruggle 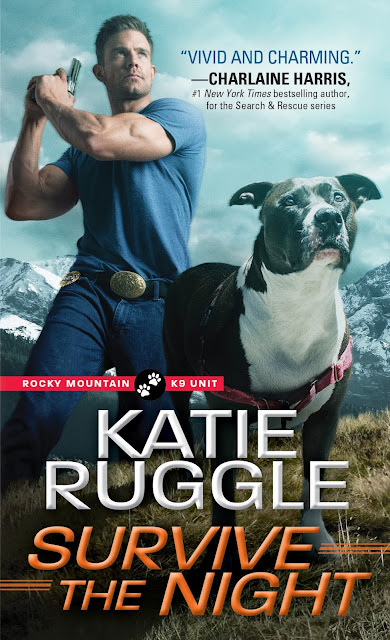 He's always been a haven:
For the lost. The sick. The injured.
But when a hunted woman takes shelter in his arms, this gentle giant swears he'll do more than heal her battered spirit—he'll defend her with his life.

K9 Officer Otto Gunnersen always had a soft spot for anyone in need. As Monroe's very own Dr. Doolittle, he dedicates himself to rehabilitating the injured souls that cross his path—but for all his big heart, he's never been in love.

Until he meets Sarah Clifton's haunted eyes. Until he realizes he'll do anything to save her.

All Sarah wants is to escape a life caught between ambitious crime families, but there's no outrunning her past. Her power-mad brother would hunt her to the ends of the earth…but he'd never expect Sarah to fight back. With Otto and the whole of Monroe, Colorado by her side, Sarah's finally ready to face whatever comes her way.

It's time to take a stand.

Breaking out of his thoughts, Otto strode to the viner entrance. Even at that early hour, it was starting to fill up with customers. Giving Jules a nod of greeting, he made his way to the table that had become their usual meeting spot after the diner had been blown up two months ago.
\
Hugh saw him and swiveled around, attempting to prop his leg on the chair next to him, but Otto was already there, sliding into the seat.

“Quit swinging your leg around,” Otto grumbled, flipping his coffee mug right side up.

“It’ll never heal if you keep abusing it.”

“I’m not abusing my leg. You’re thinking of another body part.” Wiggling his eyebrows comically, Hugh returned his foot to the chair across from him.

“No, my…” Hugh’s reply trailed off as Otto gave him a stern look. “You know, I liked it better when you were obsessing over Theo, rather than me.”

“I didn’t.” Theo leaned back in his chair, his normally severe expression amused.

“Maybe if you’d quit getting shot and breaking bones, then I could ‘obsess’ less,” Otto suggested. Sometimes he felt like the ground crew for two reckless acrobats, running around trying to catch them before they hit the ground.

Jules hurried over to their table and poured him some coffee. “How are you, Otto?”

He couldn’t honestly say “good,” since he was living in a hot swamp of still-fresh humiliation after his last encounter with Sarah, plus he’d had to wake up every three hours to bottle-feed puppies, but any response other than “fine” would awaken Jules’s curiosity, and he didn’t want to deal with the interrogation that would follow. Instead, he raised a shoulder and grunted.

“Uh-oh,” Jules said, meeting Theo’s gaze. The two exchanged a look that Otto knew boded poorly for him. “There’s a story here. Hang on. Let me get the Lynches their breakfast platters, and then I’ll be back to hear the whole thing.”

“There is no ‘whole thing,’” Otto protested, but Jules was already gone. From Hugh’s laughter, his huffy mood had disappeared, as well.

Theo leaned toward them. “Before she gets back, what did you learn?”

“About what?” Otto’s brain felt foggy from lack of sleep.

“The newest houseguest,” Hugh prodded. “We haven’t had a chance to talk about it yet, and Grace still won’t let me near her. You’re the only one with access. Did you manage to get her license number?”

It seemed like he couldn’t escape from reminders of Sarah. A fresh wave of humiliation flooded him. “No.” Otto didn’t just mean he didn’t get her license number; he meant that there’d be no discussion about Sarah…not until he could forget what he’d said, which probably meant they could never talk about her. Otto would be okay with that.

“You didn’t?” Hugh sat back, wincing slightly and reaching his good arm to reposition his leg. “I knew I should’ve followed you up there, but Jules threatened my life if I did. What’s her last name?”

Pressing his lips together, Otto gave a single, sharp shake of his head.

“You are.” Theo eyed him from across the table. “Why?”

“What did you do?” Hugh gave him a feigned look of horror, and Otto resisted the urge to punch him.

“What could we have done?” he scoffed instead, staring down at his untouched coffee. “It was two minutes. Grace was there.”

Opening his mouth to deny it, to say he felt nothing, Otto found he couldn’t get the words out. Instead, he gave the same half-assed shrug he’d offered earlier.

“Yeah?” Hugh sounded fascinated, and Otto had to resist the urge to roll his eyes. It wasn’t that uncommon. “You have a thing for her? The last time you had a thing for someone, it was that dispatcher who moved to Cleveland right after you got up the nerve to ask her out. What was that—two years ago?”

“Three,” Theo corrected, his gaze not leaving Otto’s face. “Consider doing a background check before you get in too deep.” Otto gazed at him evenly, and Theo gave a half smile and a shrug. “Do as I say, not as I do.”

“If you like her,” Hugh said, “you’re not the right one to be investigating her. Things get fuzzy when there are emotions involved. I should know. Want me to dig around for you?”

“There will be no digging,” Jules stated as she pulled a chair from a nearby table and plopped down next to Theo. “Hey, sweetness. I’m on break so you can kiss me now.”

Theo gave her a smile and obliged. Otto focused on his coffee until they came up for air.

“We were talking about gardening,” Hugh lied easily, and Otto held back a snort.

“Uh-huh.” Jules sounded as skeptical as she should be. “Gardening. In November.”

Hugh gave her a sweet smile. “Never too early to start planning.”

“Right.” After giving Hugh a suspicious look, she turned to Theo. “What were you really talking about?”

Mouth open, Otto stared at Theo. He’d expected Hugh to spill the beans, but Theo? “What the hell?”

Looking completely unrepentant, Theo laid an arm over the back of Jules’s chair and picked up his coffee mug with his free hand. “I would’ve just told her later.”

“That’s true,” Jules said, leaning forward with the same gossip-loving expression as Hugh. “He knows better than to withhold juicy tidbits. It’ll be useful to have me in the loop, though. I can talk you up to her, arrange ‘coincidental’ meetings, let you know her date preferences, and all that.”

“I’ll find out today what she thinks about you.” Jules was still talking.

Hugh was snickering. “Fair warning, buddy. I have to tell Grace, too.”

Opening his eyes, Otto turned his best glare—one that transformed even the surliest suspect into a compliant heap of goo—on his partner, but it only made Hugh grin wider.

“Sorry, but if she found out that she was the last to know, my life wouldn’t be worth living anymore. Grace would make sure of that.” Hugh made a mock-terrified face.

“I’m not interested in Sarah.” Otto held back a wince. It sounded like a lie, even to him.

It didn’t help when Jules and Hugh started laughing. Even Theo looked amused.

His only hope was to change the subject. “Jules, I need a favor.”

She bounced a little in her chair. “Do you want me to ask Sarah what her favorite flower is?”

“No. Can you take care of the puppies tonight during my shift?”

“Puppies?” Jules still looked excited, even though he’d shut down her matchmaking.

“Of course. Dee is going to be out-of-her-mind thrilled.”

At the mention of the little girl, Otto managed a smile. “How’s the cat?”

“He’s great. Turtle is quickly becoming the king of the house.”

Jules shrugged. “It involved about eight hours of discussion over two days. Once everyone agreed on a name, I wasn’t about to argue.”

“Jules!” Megan, the diner owner, yelled from her spot by the window. “Break’s over. The Silver Fork Casino bus just pulled up.”

Making a face, Jules pressed a quick kiss to Theo’s cheek before standing. As she returned her chair to its rightful spot at the neighboring table, she said, “See y’all later.”

She winked at Otto. “Drop the puppies off any time this afternoon. I’ll make sure we’re all home.”

The emphasis reminded Otto that Sarah would be at Jules’s house, and he almost groaned. A part of him was eager to see her again, but facing her after his super-creep act the other day would be rough. He gave Jules a slight nod, hiding his apprehension, and then turned back to his partners.

When he saw their smirks, he braced himself. Breakfast was going to be rough. 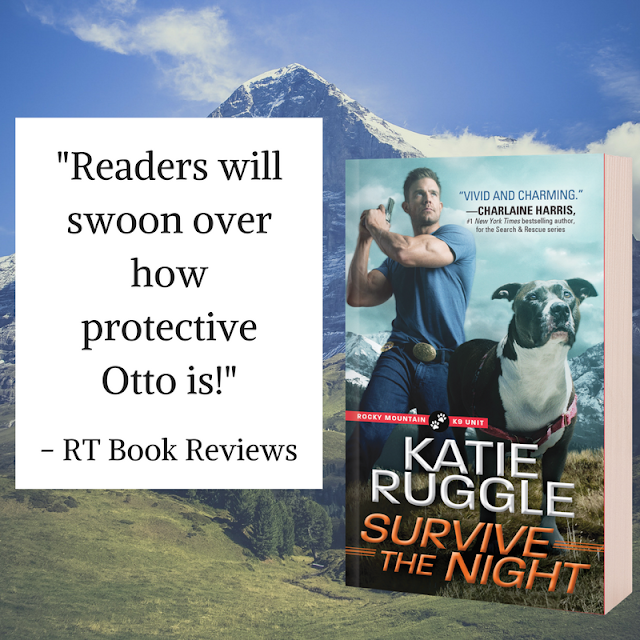 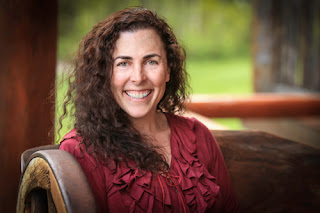 A fan of the old adage “write what you know”, Katie Ruggle lived in an off-grid, solar- and wind-powered house in the Rocky Mountains until her family lured her back to Minnesota.

When she’s not writing, Katie rides horses, shoots guns (not while riding, although that would be awesome), cross-country skis (badly) and travels to warm places where she can scuba dive.

A graduate of the Police Academy, Katie received her ice-rescue certification and can attest that the reservoirs in the Colorado mountains really are that cold. A fan of anything that makes her feel like a bad-ass, she has trained in Krav Maga, boxing and gymnastics.

You can connect with Katie at KatieRuggle.com, on Facebook at