Welcome to my stop on the Virtual Tour, presented by Goddess Fish Promotions, for Elektra Chaos by Deanna Roy.  Please leave a comment or question for Deanna to let her know you stopped by.  You may enter her tour wide giveaway, where one (1) randomly chosen commenter will be awarded a $20 Amazon/BN GC, by filling out the Rafflecopter form below. You may follow all of the stops on the tour by clicking on the banner above.  The more stops you visit, the better your odds of winning.  Good Luck! 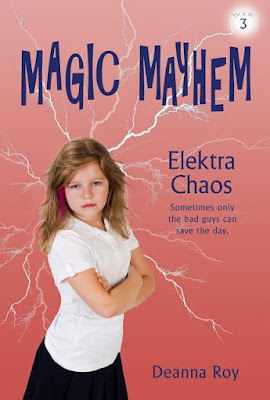 Elektra never wanted to be the good guy.

She’s a troublemaker and a clever Loki magic thief. Nobody gets in her way. All she has to do is zap people with her electric-magnetic power, and they forget where they are or what they are doing.

But a few days ago in the desert, a magnetic sandstorm did more than blow everyone backward. It switched the polarity of the magic world. The good guys turned bad. And the bad guys like Elektra, well, now their magic only works if they are doing good in the world.

Now the Vor are out to steal more power, making the thieves look like chumps. Elektra will have to fight every bad guy code she’s ever stood for to take down the good guys and save the day.

Elektra Chaos is the final book in the Magic Mayhem trilogy.

Silver scuffed her foot against the floor. “Coach, I think you fail to understand the situation. We’re not able to use our powers for tricks. It just doesn’t happen.”

Coach Snicker crossed her arms in front of the Trinity Academy logo on her sweats. “I’m hearing a lot of excuses. We are Loki. We are clever. We are driven. We don’t give in just because some rock in the desert got pushed around.”

Elektra exhaled slowly, trying to control her rage. Her pink feather was shifting, tickling her cheek. She pushed it back, but it stubbornly moved forward again. The metal coil that attached it to her hair was getting attracted to something, but what?

She looked around, and she saw him.

Marcus. He was above her, looking over a rail. He was in fifth grade, but looked much younger due to his size. His hair was pale and stood straight up, like he was shocked. He’d changed out of his Trinity uniform and wore normal shorts and a blue T-shirt.

They’d spent hours together in the desert, stuck on a trailer with a giant magnetized rock. And helped each other. Actually joined forces, like the Avengers, or she guessed, more like Batman teaming up with the Joker.

He watched her and the pink feather aimed for him as if he was the center of gravity. She tucked the bit of fluff behind her ear and turned away. They couldn’t help each other now. The lines were drawn. She was on one side, and he was way on the other. 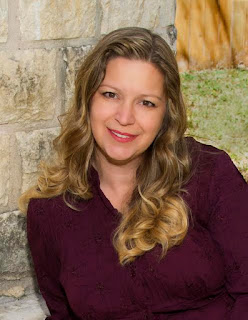 Deanna Roy is the six-time USA Today bestselling author of middle grade books, women's fiction, and college romance. She wrote Elektra Chaos for her daughter Elizabeth, who was diagnosed with epilepsy at age six.

a Rafflecopter giveaway
Posted by Maria at Friday, March 17, 2017