Spotlight & #Giveaway for The Art of Breathing by Janie DeVos

Welcome to my stop on the Virtual Tour, presented by Goddess Fish Promotions, for The Art of Breathing by Janie DeVos.  Please leave a comment or question for Janie to let her know you stopped by.  You may enter her tour wide giveaway, where one (1) randomly chosen commenter will be awarded a copy of her book, by filling out the Rafflecopter form below.  You may follow all of the stops on the tour by clicking on the banner above.  The more stops you visit, the better your odds of winning.  Good Luck! 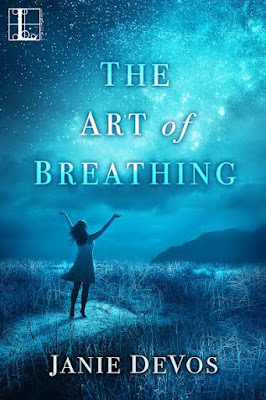 The Art of Breathing
By Janie DeVos

From author Janie DeVos comes a poignant and richly detailed novel set in 1950s North Carolina, where one young woman struggles to save her own life—and finds the strength to truly live it.

When Kathryn Cavanaugh steps over the threshold of the Pelham Sanatorium in 1954, she has no idea when, or if, she will ever leave it again. Despite the rise of promising new treatments, Tuberculosis is still feared and often fatal. But twenty-four-year-old Kate has proven her resilience before, leaving her Blue Ridge Mountain home for a very different life in the city with her ambitious attorney husband, Geoffrey. For the sake of her family, especially her young son, she’s determined to get healthy again.

The sanatorium is a strange battlefield, with every patient fighting for survival amidst a numbing routine of tests, treatment, and enforced rest. Kate quickly finds camaraderie among the women on her ward—and a growing kinship with fellow patient Philip McAllister. As weeks pass, the hospital’s confines come to offer more independence than Geoffrey’s preoccupation with status ever allowed. And with this surprising new discovery comes the courage to contemplate the choices she has made—and, perhaps, the chance to breathe freely at last…

“A shivaree. It’s a kind of surprise party, you might say,” Mama answered.

Mama, choosing to ignore Daddy, began to describe it. “Honey, a shivaree happens after a wedding takes place to let the bride and groom know that everybody approves of the marriage. We’ll sneak up on them at Uncle Prescott’s house, after the ceremony, and we’ll bang pots and pans, and holler and sing, and make a big ol’ ruckus—just to let them know that we’re tickled Glory’s a part of the family now.”

“Sure hope we don’t catch ’em in a most compromising position.”

Daddy snickered. “I can just see it now: We’ll be sneaking up to their window, real quiet-like, and before we can make any racket, we’ll hear Prescott shouting to the rafters, Lord, God a’mighty! Glory hallelujah!”

Daddy and I roared with laughter, while Mama, trying her hardest to be stern, could barely contain herself either. “Oh, for heaven’s sake, Jack! You behave yourself, you hear me!” Then she couldn’t hold back any longer and joined us as we laughed so hard we cried.

Oh, it was good to be home!

“Mama . . .” I tried to move on to another subject, but each time I did, we started laughing again. Finally, I was able to ask the question.

“What’s going on with Ditty? I haven’t heard from him since Christmas, and every time I’ve called his place, there’s no answer. I’ve even left messages with Jean to have him call me, but she’ll say something like Well, I will if I see him, real mysterious-like. When I ask her if there’s something going on with him, she’ll say she doesn’t know nothin’ about no one. Says she’s just the mill’s secretary and that she minds her own business. So, what’s going on with him? Is he all right?”

“We don’t know,” Daddy quietly answered and all the humor suddenly evaporated. “We haven’t seen him in weeks. Last we heard he was over in Lost Cove.”

“Lost Cove! What in the world is he doing over there?”

Donnie was watching and listening hard to our conversation. Mama knew the subject was one that needed to be discussed without him, so she quickly shifted the conversation. “How ’bout we save this talk for the front porch, later on.” Then, “Donnie, after we eat some supper, we’ll go do somethin’ fun. Sound good?”

I suggested that we go down to the creek and try catching a few trout. “Or would you rather go over to the orchard’s shop and get some of those good soft peppermints that your grandma loves more than life itself?”

“Peppermints!” both Donnie and Mama shouted in unison. And though the atmosphere in the truck was light once again, I was fairly certain there was a storm brewing on the horizon and my brother was in the eye of it. 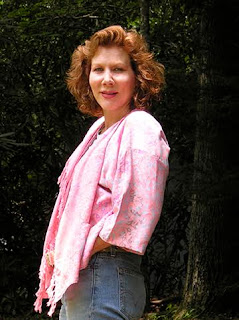 Janie DeVos is a native of Coral Gables, Florida. She attended Florida State University, then worked in the advertising industry for over a decade, including radio, cable television, public relations and advertising firms. Though her career changed over the years, one thing didn’t—her love of writing. She is an award winning children's author. Beneath a Thousand Apple Trees is her adult debut.

a Rafflecopter giveaway
Posted by Maria at Monday, March 06, 2017