Virtual Tour & #Giveaway for Cloak and Mirrors by P.M. Terrell

Welcome to my stop on the Virtual Tour, presented by Goddess Fish Promotions, for Cloak and Mirrors by P.M. Terrell.  Please leave a comment or question for P.M. to let her know you stopped by.  You may enter her tour wide giveaway, where one (1) randomly drawn commenter will be awarded a Celtic Necklace containing The Tree of Life (US only), by filling out the Rafflecopter form below.  You may follow all of the stops on the tour by clicking on the banner above, the more stops you visit, the better your odds of winning.  Good Luck! 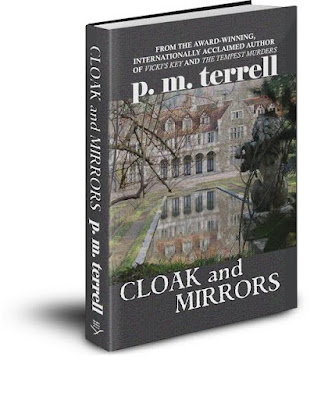 CIA operatives Vicki Boyd and Dylan Maguire are back in the 6th book of the award-winning Black Swamp Mysteries Series. Vicki and Dylan journey to Ireland for their honeymoon and while they are there, they agree to pick up a package from a Russian spy containing plans for Russia's latest stealth technology. But when the Russian decides to defect, they find themselves trying to get him safely out of the country. They also discover the Kremlin has uncovered their identities and now Vicki and Dylan flee across the island. With breathtaking descriptions of Ireland's rugged coast and the Northern Lights, romance and suspense come together again.

The winds whistled and swirled in the frosty night like a chorus of apparitions dancing and bobbing, leaving soft whispers against Dylan’s ear, enticing, cajoling, flirtatious and deadly. Ah, but they could drive a man insane on a night like this, he thought, pulling his collar tighter about his ears. He wore an Irish tweed cap and still the winds licked at his hair like fingers running through it, soothing, insistent and treacherous.

The horse’s mane was grasped as well by the same invisible force, the long strands stretched as though they were being combed by an otherworldly creature that would not let go. They were nervous tonight and he imagined given their heads, they would turn about and leave the eerie foothills of the Blue Stack Mountains. He kept a firm hold on Dougal’s reigns as the horse snorted, the sound unnaturally shrill.

He could read a horse like he could read a man’s face, and tonight it didn’t bode well. Dougal’s ears were stiff and pitched forward, a sign of unease for sure, and every now and again they twitched and trembled as his haunches dipped low. Dylan peered through the shadows at the other horses, both as spirited as his; and yet their tails were clamped low, their voices constant.

In contrast, the men were hushed as they had been since leaving the manor house, the silence broken only intermittently as Jack announced a change in direction or a distant landmark for which he was aiming. Even then, his statements were terse as if he was reluctant to speak in the eerie terrain.

The ground beneath the horses’ hooves was uneven and unpredictable. As the night sky began to brighten with the first vestiges of the aurora borealis, he began to see why their progress had slowed since entering the mountain range; the horses had to pick their way around craggy rocks, the tall grasses obscuring whether the land was firm or soft until their hooves either landed on solid ground or they felt the disconcerting descent into boggy earth.

He inched the horse forward until it was nearly even with Jack. He rode a silver mare with a jet black mane and tail, a beautiful animal to be sure and under the stars her coat was mesmerizing as if it was aglow.

“Are you certain this is the way to Innisbarracar?” Dylan asked.

Jack glanced in Alexei’s direction before shifting his attention to Dylan. “You said you needed weapons, did you not?”

“Then we’d be taking a bit of a diversion.” He pointed at the mountain’s highest peak.

“Innisbarracar would be on the other side through the pass. We’ll be headin’ in that direction—” he pointed slightly to the left of the mountain “—where we’ll be arming ourselves first.”

They rode for a few minutes in silence before Dylan asked, “And what type of weapons would you be havin’ there?”

Jack looked at him out of the corner of his eye. “Whatever kind you’d be needin’.” 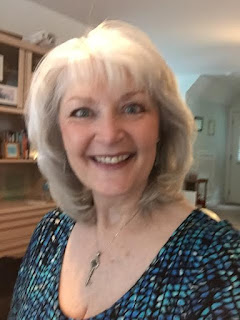 P.M. Terrell is the pen name for Patricia McClelland Terrell, the award-winning, internationally acclaimed author of more than 20 books in several genres, including suspense, historical and non-fiction. Prior to becoming a writer, she owned two computer companies in the Washington, DC with a specialty in combatting computer crime. Her clients included the CIA, Secret Service and Department of Defense. Technology is often woven through her suspense thrillers. Terrell is of Irish descent, and Ireland often figures prominently in her books as well. She has been a full-time author since 2002 and currently travels between her home in North Carolina and Northern Ireland, the home of her ancestors. She is also the founder of Book ‘Em North Carolina’s Writers Conference and Book Fair (http://bookemnc.org) and The Novel Business (http://thenovelbusiness.com).

a Rafflecopter giveaway
Posted by Maria at Wednesday, March 29, 2017