Welcome to my stop on the Release Day Blitz, presented by Bewitching  Book Tours, for The Cowboy and the Vampire: The Last Stand by Clark Hays and Kathleen McFall.  Please leave a comment ro question for them to let them know you stopped by.  You may enter their tour wide giveaway by filling out the Rafflecopter form below.

Take one long, last look at LonePine, Wyoming, population 438. It’s been two years since the vampires quit the quirky little town and things are mostly back to normal — broken dreams and never enough whiskey. But that’s about to go to hell.

Hold on tight for a midnight showdown when a psychotic religious order takes the entire town hostage — including Tucker's long-lost brother — to lure Lizzie from her frozen exile in Russia. The mad monks know Lizzie’s murder will strand the ruling vampire elite in a disembodied afterlife so the cult can impose their twisted beliefs on the living and undead alike. It’s a rip-roarin’ stampede as a cowboy and a vampire try to round up the shattered pieces of their unusual romance.

With the fate of the world on the line yet again, can Tucker and Lizzie put aside their broken hearts to face one last sunset together?

Slap leather or reach for the sky.

The first few months were anguish. But then she threw herself into bringing order to her inherited chaos. If she was to run this vampire shit show, she would run it right.
And she had, intensely, ruthlessly, for the first year.

Now, everyone knew the rules, knew the consequences for breaking the coda, and—if grudgingly—understood the wisdom behind the annual allocation. She kept her word, showing no favoritism. Nine turns picked by the Council, followed by one pick for Lizzie, with nine nights of rest. By the end of the first year, a fragile trust in her leadership was established.

By the beginning of the second year of her self-imposed exile, as the intensity of the work began to wane, she realized something had shifted. The full weight of her future lodged permanently, sadly, in her soul.

Rurik, forever circling like a handsome vulture, sensed the change.

“Finally, you admit to yourself he is not coming for you,” Rurik said.

“I’m not the one who requires persuading on this point,” Rurik said. “But no matter the reason, I am pleased. Stop working so hard. Amuse yourself with the privileges and pleasures your position affords. You can have anything you want, with no punishment.”

“From the society you once valued, or from yourself,” Rurik said. “You are free from guilt, free of all constraints, free to act upon your desires and to assume the glorious existence that awaits only your assent.”

Rurik felt something akin to compassion as he watched Lizzie struggle to control her emotions, mistaking liberation for captivity. He was right in one sense, though; she was coming to the same realization all vampires faced at some point in their long, undead existence, even those whose turning was consensual: there was no going back.

Yes, Lizzie thought, defiantly, as the first year passed into the second. If she was no longer ever to be a human, she might as well have fun. Why the hell not? She submerged herself into her passions and found that although not exactly fulfilling, it was diverting, covering her nightly routines with a shroud of hedonistic numbness that prevented any feelings at all—other than immediate pleasure—from surfacing.

She would never admit it, ever, but Rurik was right on another point. She had waited. She had hoped he would come for her, but why would he? She made it clear by breaking his heart that they would never be together. That he believed her ruse broke her heart.

Such a sad and dusty little tragedy, she thought, clutching the railing. A shadow by the lake’s edge caught her eye—Rurik, out with his dogs.

He felt her gaze and looked up, taking in her nude body and letting his senses wash over it, the closest—it seemed—he would come to possessing her, at least for the time being.

She could feel his heart stuttering, but held her own body in perfect check until he averted his eyes and continued his walk.

Lizzie once again considered whether it was time to move. Rurik’s home was spacious and lonely and safe and remote, and while he had been a good host to her, he enjoyed the power of proximity over the other tribes, and she understood he was motivated by a hope of his own.

“It is inevitable that you and I come together,” he once told her. “You have known this since we first met in that godforsaken American outpost.”

“Nothing is inevitable,” she said. Thwarting his passions had become a habit.

She wondered if Rurik ever missed the man he had once been, the brilliant military strategist who helped turn back the crusaders all those many years ago in a battle for Russia’s soul. “Ironic that you lost your soul in the process,” she said aloud and in his direction.

Her private cell phone buzzed on the bedside table. Lizzie padded back into the room, the wolfhound in tow.

Elita. She picked up the phone.

“My queen,” Elita said, managing to sound both sarcastic and reverential. Was there a difference, Lizzie wondered?

“My loyal subject, my lovely maid-in-waiting,” Lizzie replied. In all this madness, Elita was her only certainty.

“Whatever that means,” Elita said. “How’s the frozen tundra treating you?”

“Still frozen. Have you wrestled the American Royals and the Reptiles into peaceful coexistence?”

“We’re making progress, one corpse at a time.”

“When will you visit?” Lizzie asked.

Lizzie paused. That was not a good sign. “That’s a welcome, but unexpected surprise.”

“What I must tell you may not be so welcome.”

“I’ll save the details until I can tell you face to face, but in brief, I’ve heard rumblings, screaming really, that you have a new enemy.”

“Why would that concern me?”

“Keep your guard up until I arrive.”

“My guard is never down,” Lizzie said, breaking the connection.” 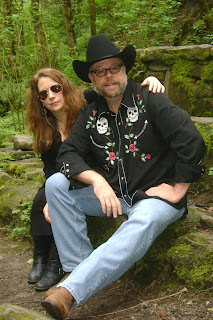 Between the two of them, Clark Hays and Kathleen McFall have worked in writing jobs ranging from cowboy-poet to energy journalist to restaurant reviewer to university press officer. After they met, their writing career took center stage when they wrote the first book in The Cowboy and the Vampire Collection as a test for marriage. They passed. Clark and Kathleen now live in Portland, Oregon. 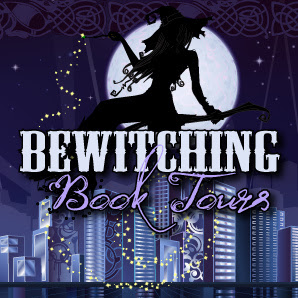 a Rafflecopter giveaway
Posted by Maria at Friday, June 10, 2016