Darcy Burke is the USA Today Bestselling Author of hot, action-packed historical and sexy, emotional contemporary romance. A native Oregonian, Darcy lives on the edge of wine country with her guitar-strumming husband, their two hilarious kids who seem to have inherited the writing gene, and three Bengal cats.

USA TODAY Bestselling author CHRISTI CALDWELL blames Judith McNaught’s “Whitney, My Love!” for luring her into the world of historical romance. While sitting in her graduate school apartment at the University of Connecticut, Christi decided to set aside her notes and pick up her laptop to try her hand at romance. She believes the most perfect heroes and heroines have imperfections, and she rather enjoys torturing them before crafting them a well deserved happily ever after!

Christi makes her home in southern Connecticut where she spends her time writing her own enchanting historical romances, chasing around her feisty seven-year-old son and caring for her twin princesses in training!

USA Today Bestselling and Award Winning Author of more than a dozen unusually unusual historical romances that have been known to include scarred heroes, feisty heroines, marriage-producing scandals, far too much scheming, naughty literature and always a sweet happily-ever-after. When not escaping to another world via reading or writing a book, she spends her time chasing two young boys around the house, being hunted by wild animals, or sitting on the swing in the backyard where she has to use her arms as shields to deflect projectiles AKA: balls, water balloons, sticks, pinecones, and anything else one of them picks up to hurl at his brother who just happens to be hiding behind her.

Best selling author Sue London created the beloved Regency romance series The Haberdashers. If you like your historical romance with a little action, a little humor, and a lot of strong-minded women, then this is the series for you!

Sue London began writing short stories about horses and teen sleuths when she was seven years old. After that she traveled to distant worlds, fought with swords and sorcerers, and played with a few undead things. As you might have expected, this means she went into accountancy. Well, maybe that was an odd plot twist, but that’s the difference between real life and fiction – fiction has to make sense.

In her twenties she developed a deep affection for romance, especially enjoying the work of Nora Roberts, Mary Balogh and, most recently, Lauren Royal, Rose Gordon, Danelle Harmon, and Diane Farr. You can thank those authors for leading a sci-fi tomboy into writing historical romances set in the Regency period.

RUTH ANN NORDIN is a stay-at-home mom of four school-aged boys and the proud wife of a veteran of the US Air Force. She lives in Montana where she is blessed to spend her days creating new worlds with her characters. To date, she's written over fifty romances and has plans to write many more in the years to come.

Erica Ridley learned to read when she was three, which was about the same time she decided to be a writer when she grew up.

Now, Erica is a New York Times best-selling author of historical romance novels. Her latest series, The Dukes of War, features roguish peers and dashing war heroes who return from battle only to be thrust into the splendor and madness of Regency England.

When not reading or writing romances, Erica can be found riding camels in Africa, zip-lining through rainforests in Costa Rica, or getting hopelessly lost in the middle of Budapest.

LAUREN ROYAL decided to become a writer in the third grade, after winning a “Why My Mother is the Greatest” essay contest. Now she’s a New York Times and USA Today bestselling author of humorous historical romance novels. Lauren lives in Southern California with her family and their constantly shedding cat. She still thinks her mother is the greatest.

DEVON ROYAL is the daughter of romance novelist Lauren Royal. After attending film school, she wrote an award-winning TV comedy pilot and spent several years working in digital video production before turning her focus to fiction writing. Devon lives in Southern California with her fiancé. She also thinks her mother is the greatest.

About the Box Set: 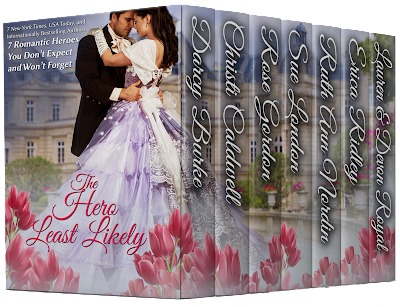 SCOUNDREL EVER AFTER by Darcy Burke

When wallflower Audrey Cheswick runs away with England’s most wanted criminal, she learns adventure comes with a price—not just her reputation or her virtue, but her heart. If Ethan Jagger can escape the hangman’s noose and start anew, will she consent to love a scoundrel ever after?

War-torn veteran, Lord Drake devotes himself to forgetting his days on the Peninsula through an endless round of meaningless associations. He no longer wants to feel anything, but Lady Emmaline is making it hard to maintain a state of numbness. With her zest for life, she awakens his passion and desire for love.

DESIRES OF A BARON ~ Rose Gordon

Giles Goddard, Lord Norcourt is odd. Odder still, he has suddenly taken a fancy to his brother’s love interest, the fallen Lucy Whitaker. Lucy was once thrown over by a lord and she has little desire to let it happen again, but she’s about to learn that his desires just might be enough for the both of them.

Quincy Telford, Duke of Beloin, has hated Viscount Bittlesworth as long as he can remember. Now the man’s daughter is constantly in his path. Can he escape her temptation and avoid peril in the increasingly dangerous game of cat and mouse he is playing with his blackmailer?

Season after Season of not being able to secure a wife, Lord Clement's life changes for the better when a beautiful stranger kisses him. Now he has a wife who has it all: beauty, passion, and excitement. But it's not over. Thanks to her tainted past, her newfound love with Perry is threatened when her brother comes back into her life. Can she protect Perry from finding out the truth or will her brother get the upper hand?

When Major Bartholomew Blackpool learns the girl-next-door from his childhood will be forced into an unwanted marriage, he returns home to play her pretend beau. He figures now that he's missing a leg, a faux fiancée is the best an ex-soldier can get. He admires her pluck, but the lady deserves a whole man--and he'll ensure she gets one.

What’s a colorblind Irishman to do when he’s blackmailed into impersonating a renowned landscape artist, lying to all of London society, and risking the TON’s collective wrath if he’s found out? Why, fall for the lovely and unattainable marquess’s daughter next door, of course. But his fetching neighbor is no simpleton and an artist in her own right. When she realizes his ruse, will she expose his misdeeds…or find herself drawn into the hoax?

One winner will receive a $25 Amazon Gift Card

a Rafflecopter giveaway
Posted by Maria at Friday, June 17, 2016