Book Blast & #Giveaway for From Fake to Forever by Jennifer Shirk

Welcome to my stop on the Book Blast, presented by Goddess Fish Promotion, for From Fake to Forever by Jennifer Shirk.  Please leave a comment or question for Jennifer to let her know you stopped by.  You may enter her tour wide giveaway, where one (1) randomly drawn commenter will be awarded a $25 Amazon/BN GC,  by filling out the Rafflecopter form below.  You may also follow all of the stops on the tour by clicking on the banner above, the more stops you visit, the better your odds of winning. 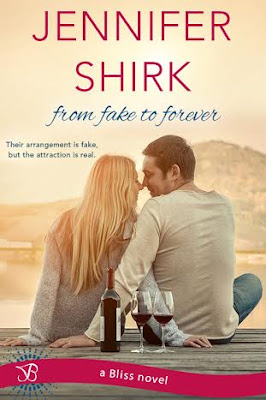 From Fake to Forever
By Jennifer Shirk

Sandra Moyer’s preschool is struggling, so she reluctantly agrees to let super-famous actor Ben Capshaw research a role there. Ben’s always joking around, never serious, but there’s something about the buttoned-up, beautiful Sandra and her young daughter that makes him want to take life more seriously. But Sandra won’t trust him—what if it’s all an act, research for the role? As the lines between make-believe and reality blur, Ben will have to decide if love is worth casting aside the role of his life for a new role…that could last a lifetime.

From the corner of her eye, Sandra Moyer noticed a tall, bearded man leaning against the playground fence and automatically tensed. Because she was a single mom and alone, her paranoid nature already labeled him a felon, although technically he was doing nothing wrong. In fact, come to think of it, he had a pretty nice body with those real-life Hulk arms and broad chest. She didn’t know what that made her for noticing something like that about a man she assumed was on some Family Watchdog list, but the phrase “cheap and desperate” came to mind.

Since when did I start ogling the physiques of strange men?

Her shoulders wilted as she brooded over that question. She obviously needed to get out more. She needed to just get out. The problem was she didn’t see herself doing that any time soon. Her self-esteem had hit rock bottom and hadn’t been able to locate its way back up since the day she’d found Steve cheating on her with one of his costars.

An unpleasant picture of her ex-husband lip-locked with a Julianne Moore–type redhead popped into her mind, and she shuddered.

Actors. Did their profession ever mesh with reality?

The answer to that was a resounding no. Unfortunately, she’d learned that one the hard way. Steve had even thought she’d understand the main reason he had the affair was for the publicity and what it could do for his career and income. Like that was supposed to make her feel so much better about it.

“Mommy, I want to play in the sandbox.”

Her daughter’s voice pulled her from those depressing thoughts, and she gratefully looked down. “Okay, honey. Just five more minutes, though.”

Hannah squealed and dashed through the playground as fast as her little legs could run. Sandra couldn’t help but smile. Life was so simple when you were four. The little things kept you happy. And why not? Four-year-olds didn’t think about paying the rent or overdue bills. Things that were constantly on her mind ever since she’d opened the preschool with her sister. No, the only thing you worried about at that age was whether Mommy would give you ice cream if you didn’t eat your string beans.

She’d kill for that kind of stress again.

Unfortunately, the thought of homicide had her eyes traveling back to the well-built man she’d been ogling earlier. He was tossing around a football with a young boy now. Nothing illegal, but something was off. She had a sixth sense when it came to protecting her daughter, and right now it was telling her something big. Like he’d just gotten out of prison. It must have been a whopper of a sentence, too, judging from the long, scraggly hair and the kind of beard and mustache Santa Claus would envy. She never made a habit of associating with men who looked liked convicts, but there was something familiar about him…

She doubted he had a child enrolled in her preschool. Story time at the public library? She highly doubted that, too. He didn’t exactly look like the loving Father Knows Best type, considering that fire-breathing skull on his calf wasn’t designed to instill tenderness. At least he was out spending time with his son, which was a lot more than what her daughter was getting from her own father.

As if her thoughts had been telepathically sent out, the man in question cast a lingering gaze over in her direction. And he smiled.

Oh, no, don’t even think about it. Don’t you dare come over here. She fumbled to put her sunglasses back on and almost punched out a lens. Please stay where you are. He’d better be a jolly person being his usual overly friendly self and not just leering at her. But she laid odds on the latter.

What was it with her? She could attract a creep from the next state over without even trying. A talent she’d gladly relinquish.

She flopped down on a bench. Opening her purse, she yanked out a book and hid her face behind it. If she pretended to be engrossed in reading, maybe the man would reconsider trying to strike up a conversation. Yeah, that’s all she needed—some ex-con cozying up to her.

Confident her glasses hid her eyes, she lowered the book a half inch and sneaked another peek. Tall, Dark, and Scraggly had his back to her now. Relief enveloped her. Thank goodness, she thought, slowly letting out a breath.

One deadbeat per lifetime was enough. 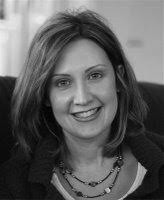 Jennifer Shirk has a bachelor degree in pharmacy-which has in NO WAY at all helped her with her writing career. But she likes to point it out, since it shows romantic-at-hearts come in all shapes, sizes, and mind-numbing educations.

She writes sweet (and sometimes even funny) romances for Samhain Publishing, Avalon Books/Montlake Romance and now Entangled Publishing. She won third place in the RWA 2006 NYC's Kathryn Hayes Love and Laughter Contest with her first book, THE ROLE OF A LIFETIME. Recently, her novel SUNNY DAYS FOR SAM won the 2013 Golden Quill Published Authors Contest for Best Traditional Romance.

Lately she's been on a serious exercise kick. But don't hold that against her.

a Rafflecopter giveaway
Posted by Maria at Tuesday, June 07, 2016