Excerpt Tour & #Giveaway for A Simple Vow by Charlotte Hubbard

Welcome to my stop on the Excerpt Tour, presented by Goddess Fish Promotions, for A Simple Vow by Charlotte Hubbard.  Please leave a comment or question for Charlotte to let her know you stopped by.  You may enter her tour wide giveaway, where one randomly chosen winner will be awarded a $15 Amazon/BN GC, by filling out the Rafflecopter form below.  You may follow all of the stops on the tour by clicking on the banner above.  The more stops you visit, the better your odds of winning.  Good Luck! 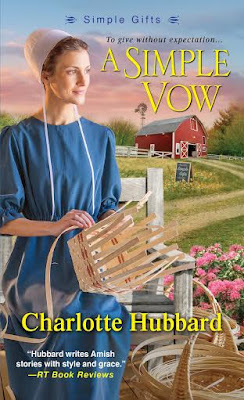 Housed in a rustic red barn, the Simple Gifts crafts shop celebrates the talents of the Amish of Willow Ridge—and the faith that inspires them. For the acceptance of simplicity opens the path to love.

As far as Edith Riehl is concerned, the baby twins thrust suddenly into her arms are a heaven-sent gift. Unable to conceive, she longs to be a mother with a home of her own. She’s going to abide by her promise to handsome Asa Detweiler to take care of them while he looks for their real father. And even if her domineering dat Cornelius refuses to countenance Asa’s suit, she can only pray the bachelor’s honesty and persistence will uncover the truth—even as he’s kindled an impossible hope for a love of her own…

Asa can’t understand why anyone would think he would be so dishonorable as to father babies and then abandon them. He’s determined to clear his name—but Edith’s caring ways also inspire him to help heal her wounded spirit and earn her trust. In the face of heartbreaking deception, he and Edith must find the strength to understand, forgive…and claim their own hearts’ joy.

“I’ve come to ask you—your family—a huge favor,” Will pleaded. He looked pale and his eyes had dark circles around them. “I—I have no idea how I’m going to care for these kids, what with Molly dying. They’re only six months old, Edith. I was hoping you and your sisters would take them until I can get my life together and—”

Edith’s eyes widened. “Is there no one in Molly’s family, or—”

“That’s just it,” Will continued in a desperate tone. “Molly’s mamm and grandmother were there at her deathbed when she blurted out this guy’s name—”

“She was no doubt delirious and unaware of what she was saying,” Edith murmured.

“—and then when Molly passed on, her grandmother had a heart attack from all the stress and went to the hospital,” Will went on doggedly. “Molly’s mother isn’t speaking to me now. I’ve had a lot of stuff thrown at me these past several weeks, what with my wife being too sick to tend the babies. I trust you Riehl sisters to care for the twins until I get through Molly’s funeral and then figure out, well—what to do with them. Please, Edith?”

It was indeed a huge favor Will was asking, but how could she refuse? The babies had almost stopped crying. Edith gazed at their precious faces as she swayed from side to side, calming them. By the sound of Will’s incredibly sad story, these helpless little souls might not have anyone looking after them—for how long? “Of course we’ll take them,” she murmured, “but we don’t have any diapers or bottles or—”

“I brought all that stuff. I was looking for your house when this guy”—Will glowered, pointing at the other man— “caught up to me and claimed I’d accused him falsely.”

The stranger looked ready to protest again, but instead he crossed his arms and clenched his jaw. Behind him, his tall black horse nickered impatiently. 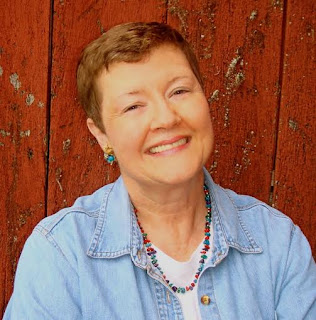 Many moons ago—like, in 1983 while she was still a school librarian—Charlotte Hubbard sold her first story to True Story. This launched her into writing around seventy of those “true confessions” stories over the years, and she’s been a slave to her overactive imagination ever since. Over the course of her writing career, she has sold nearly 50 books—most recently, Amish romance series she’s written as Charlotte Hubbard or Naomi King.

Charlotte lived in Missouri for most of her life, so her Amish stories are set in imaginary Missouri towns. These days she lives in St. Paul, MN with her husband of 40+ years and their Border collie, Ramona.

a Rafflecopter giveaway
Posted by Maria at Wednesday, June 29, 2016