Virtual Tour & #Giveaway for Key of Mystery by K.H. Mezek

Welcome to my stop on the Virtual Tour, presented by Bridging the Gap Promotions, for Key of Mystery by K.H. Mezek.  Please leave a comment or question for K.H. to let her know you stopped by.  You may enter the tour wide giveaway by filling out the Rafflecopter form below.  You may click on the banner above to follow all of the stops on the tour, the more stops you visit, the better your chances of winning. 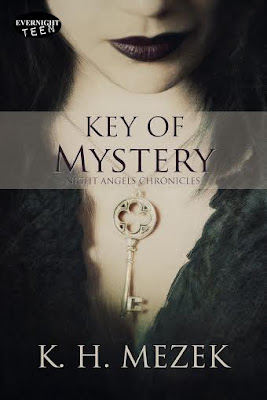 About the book:
“Be careful who you love, it just might kill you.”
When Sera’s father is killed in a horrific accident, all he leaves behind is a mysterious key. Sera places the key on a chain around her neck and vows to avenge her father. Strange characters arrive in town including the otherworldly Night Angels, who claim to be sent for her protection.

Sera falls hard for one of them—exotic, arrogant Peter. But what if his promise of love is only a ruse to gain access to the key? As Sera’s connection to the key grows, so do her supernatural powers. Guided by clues left by her father, Sera searches for the hidden chamber beneath the city, hoping to save what lies within before the sinister mayor and his deadly followers drown humanity in a bloodbath.

Before my dad’s death and the move to Cliffside, I had known only lies. I hadn’t seen the truth about myself, my family, or my friends. But here on the ground, covered in blood and dirt, and most likely dying, I knew I didn’t want to go back there. I wanted to stay with the truth. The truth hurt like hell, but it was better than being numbed by ignorance.

“No.” I think I said it out loud, but it sounded more like a gurgle. I tried harder. “Never give you the key.” I gasped. “Never.”

He hissed in anger. “Then I will turn you into undead.”

I knew he was bluffing. If he turned me into one of them, he would never get the key. I had to willingly give it to him, with a rational mind, and those undead were anything but rational.

Gore howled like he had on the plateau, and the nail raked across my face, penetrating deep into my skin. He reached down and licked the blood with his long snake tongue, a poison so painful seeping into my flesh that I almost passed out again.

When he spoke next, his tone was venomous, each syllable biting as if they were his teeth. “Clever girl, I will do something better. I will turn your brother into undead. Think on that.”

I made a feeble sound of terror, struggling to get up and unable to move.

He laughed. “You will give it to me now. Or else your brother will end up like this.” He grabbed one of the undead and pulled the grotesque, dead-eyed face down next to mine.

This was the end, then. Gore had won. I had to at least try to save my brother, even if Gore's promises were lies. With unbearable effort, I reached up and tried to undo the chain. I couldn’t. I tried to pull it up over my head but somehow, it became tangled in my torn clothes. I was too weak and the problem of removing the key from around my neck overwhelmingly impossible.

“Come, little bitch, quickly.” Gore’s fingers dangled in front of my face, as if itching to undo the chain for me. But he was powerless to do so.

A growing uneasiness rippled through the undead standing in a circle behind him. Low moans rose from cavernous mouths. Any second now, surely Gore would unleash the hoard upon my brother to devour him. Why, oh why, couldn’t I undo the chain?

I grabbed the key and pulled with all my remaining strength, whispering, “I want this. I want to give him the key. I do.” 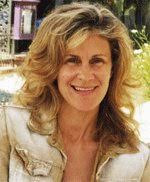 Karen Hunt is the author and/or illustrator of nineteen children’s books and the co-founder of InsideOUT Writers, a creative writing program for incarcerated youth in Los Angeles, and the founder of the MY WORLD PROJECT, connecting youth who live in remote, violent and poverty stricken areas around the world through art and writing.

She is a 2nd degree black belt in Tang Soo Do, a first degree brown belt in Eskrima, and a boxing and kick-boxing trainer. As a child, she and her family escaped out of Egypt right before the 6 Day War, lived in a 17th century castle in Switzerland and smuggled Bibles into communist countries, to name a few of her adventures.

As an adult, she continued her adventures, living between London and a village in Yugoslavia. She writes her YA works under the name K.H. Mezek. Key of Mystery, book I in the YA Urban Fantasy series, NIGHT ANGELS CHRONICLES, was published February 5, 2016 with Evernight Teen.

a Rafflecopter giveaway
Posted by Maria at Thursday, February 18, 2016