Welcome to my stop on the Book Blast, presented by Goddess fish Promotions, for Good Morning Diego Garcia by Susan Joyce.  Please leave a comment or question for Susan to let her know you stopped by.  You may enter her tour wide giveaway, where Susan will award a $20 Amazon GC to one (1) randomly chosen commenter, by filling out the Rafflecopter form below.  you may follow all of the stops on the tour by clicking on the banner above.  The more stops you visit, the better your chances of winning. 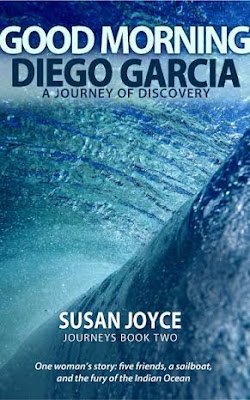 When Susan and Charles receive a letter from Cyprus friends, now in Taiwan, they get a chance to help crew a sailboat from Sri Lanka across the Indian Ocean. They have no clue what to expect. Susan reminds Charles she isn't a good swimmer. He tells her a life jacket will do the trick, and convinces her it's the opportunity of a lifetime. A must-do travel adventure. They say goodbye to friends and family in sunny California, fly to New York and on to India, arriving the day the Indian government has issued a state of emergency. And then onto the boat, and into the ocean. In monsoon season. With no charts.

In this true-life travel adventure, Susan keeps a journal and record her bizarre thoughts and telling dreams. A real life thriller, Susan's monsoon-season journey is about discovery and spiritual realization—one dream at a time.

Disembarking passengers thinned out. All at once, the terminal seemed eerily empty.

Out of a side corridor, three young Indian men appeared, moving toward me.

I quickly straddled the suitcases and sat, legs dangling across them.

Approaching, they asked if I wanted help moving them.

“We help you,” one young man said, reaching for a suitcase.

“No,” I shouted, looking around the terminal for help. I noticed a sea of orange robes heading my way. A group of young women chanting and dancing in brightly colored orange saris.

The three young men backed away and disappeared into a dark passage.

When the dancers reached me, they smiled.

One introduced herself as a devotee of Krishna, and offered to sell me a booklet to benefit the starving children of India. Others continued to chant and sway.

“Where are you from?” I asked.

“We're here to sell our books and spread the word about Krishna Consciousness, and build a temple to honor our Swami, Srila … ”

“There are thousands of starving children in New York,” I said.

“We worship the Hindu god Krishna as the one Supreme God,” another young woman chimed in, ignoring my comment.

“So you're missionaries?” I asked.

“We're evangelists. We believe in reincarnation ...” one follower wanted to explain their beliefs, but another interrupted, while others continued to chant.

“I believe in reincarnation,” I said. “But I don't think I need to sell it to others.”

They kept chanting and dancing around me.

“How many times do you have to chant this?” I asked.

I shook my head in disbelief. Where the hell is Charles? 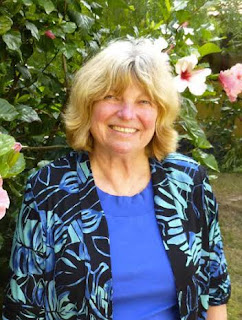 Born in Los Angeles California, Susan Joyce spent most of her childhood in Tucson, Arizona and returned to LA as a young working woman. Inspired as a child by postcards from her globe-trotting great aunt, Susan left the United States at age 20 to see the world.

She planned on being gone for a year, but ended up living her 20s and 30s in Europe and the Middle East. As a Jill of all trades, she worked as a secretary, freelance writer, taught computer classes, wrote songs, and became an accomplished artist while writing her first children's book, "Peel, the Extraordinary Elephant."

An award winning author and editor of children's books, Susan's first adult book in her memoir series, "The Lullaby Illusion--A Journey of Awakening" is a travelogue of the politics of Europe, the United States, and Israel during a twelve year 'roller-coaster' period of her life and an adventure of survival through friends and sheer determination.

Her second memoir, "Good Morning Diego Garcia" is about her adventure from India and across the Indian Ocean in monsoon season in 1975.