Welcome to my stop on the Review Tour, presented by Goddess Fish Promotions, for Oldenglen by Robin Mason and Michael Mason.  Please leave a comment or question for Robin or Michael to let them know you stopped by.  You may enter their tour wide giveaway, where Robin and Michael will be awarding a $50 Amazon/BN GC to one (1) randomly chosen commenter, by filling out the Rafflecopter form below.  You may follow all of the stops on their tour by clicking on the banner above.  The more stops you visit, the better your chances of winning. 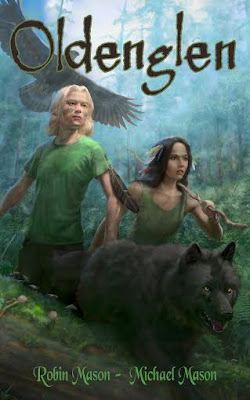 The last thing twelve-year-old Jax wanted was to leave his city life in England for a remote and rugged corner of Oregon―but he hasn’t had any say in the matter.

Although Jax hates it there, he is drawn by the deep woods, as if something or someone is pulling him in. The more he explores, the more he senses the presence of a hidden magic. Joined by Sarah, the granddaughter of the land’s owner, he begins to unravel the secrets of the glen.

But when invaders threaten the wildwood and its inhabitants, Jax and Sarah―and a most unusual army―must prepare for war.

Great peril has come to Oldenglen, but who and what must Jax and Sarah confront in the battle to save it?

“All woodfolk, be still!” called a voice. Even Acorn was now seated and, unusually for her, quiet.

“That’s old Gaffer Grayowl, Keeper of the Green Glade,” Squiffle explained to Jackson in a whisper. “Dear me, he says the same thing every time, but sometimes he forgets bits and has to go back. Hooter will take his place one day soon.” Jackson spied the round-faced owl off to one side.

“The tradition of the Gathering of the Woodfolk is a long one, going back for countless ages,” boomed Gaffer. “Our broodfathers and broodmothers, and theirs before them, and theirs before them, and still more before them, have gathered in this place in times of great peril. I bid you remember that the Green Glade and the way here and home are the only places where, by agreement from long ago, a creature is safe from any other. Some of you represent your own kindred, but any woodfolk are welcome.” Jackson looked around. This night the glade was full. The glen would be unnaturally quiet tonight. Sarah squeezed his hand.

“Who calls this Gathering?” asked Gaffer.

“I, Pondlefoot Badger, cub of Grey-Muzzle Badger and Growler Badger of Badger Tree, and Friend of all Woodfolk, call this Gathering,” said Pondlefoot, standing up.

“Take the Gladestone,” commanded the Keeper. “And say what you have come to say.”

Pondlefoot emerged from the press of woodfolk, moving heavily to the center to stand by the Gladestone. He turned slowly, looking carefully at the assembly.

“Fellow woodfolk,” the old badger began, “the glen is in grave peril, a danger greater than any faced by those who came before us.” 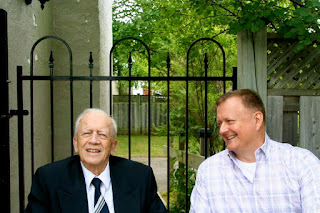 Robin Mason
Robin is the younger son of Michael Mason, co-author of OLDENGLEN. He was born in England and has lived in Zimbabwe (which was called Rhodesia then) and Canada.

The story behind OLDENGLEN came from the time the family was renting a large estate in British Columbia, Canada, many years ago. As a young boy, Robin grew up with the written word. Michael, a professor of English, would read to him every night, including such works as the Narnia books, the Hobbit and the Lord of the Rings trilogy.

OLDENGLEN is the result of that beginning, and the first book in the series known as "The Oldenglen Chronicles". LONE WOLF will be published in early 2016.

Robin is an attorney. He has been married to his wife, Angelina, for nearly twenty-five years and they are blessed with three children. The glen dwells deep in Robin; their home is in a twelve-acre forest, which they share with many four-legged and winged inhabitants.

Michael Mason
Michael was born in 1924 in England, which makes him 91-years-old. The son of an employee of a grand estate in England, as a boy Michael had room to roam.

Graduating from the University of London, and after completing a stint in the Royal Air Force during the Second World War, he began his lifelong career of teaching, in schools and universities in England, Rhodesia (now Zimbabwe) and Canada. He holds an MA and PhD in English Literature.

Oldenglen is Michael’s first novel. He is also a published poet and playwright and contributor of articles to quarterly publications.

Michael is married to Muriel and they will celebrate their 60th wedding anniversary in March, 2016. He is blessed with two sons, four granddaughters, three grandsons and one newly-arrived great granddaughter.

A big supporter of childhood literacy I jumped at the chance to read and review Oldenglen by Robin Mason and Michael Mason.  Written for “middle grade” readers, Oldenglen is a beautiful mixture of fantasy and science fiction with some paranormal elements.  Well-developed characters and good dialogue kept me turning the pages to find out what would happen next.  if you’re looking for a book for a middle reader, or a book the whole family can read out-loud together, then this is a book you’re going to want to pick up.

Moving to a new home and leaving your friends behind is never easy but things are even worse than Jackson, aka “Jax”, expected when his father moves the family from a “flat” in London to a house deep in the woods of Oregon.  With no other children nearby, Jax is faced with a choice – stay inside the house with nothing to do or explore the woods and learn about his new environment.  As Jax explores the woods, a world he never imagined is laid out before him and new friendships are forged.

I easily connected with Jax and his parents from the very beginning.  I remembered how I felt every time my family moved when I was in school and the dread I personally felt at having to leave friends behind.  The authors dis a wonderful job introducing Jax to his new environment and I especially enjoyed how their love of nature came through the pages. Their descriptions of the woods made me feel as if I was walking in the forest with Jax and getting to know his new “friends”.

The authors did a wonderful job giving “life” and “character” to the woodland animals who became Jax’s friends and I also enjoyed getting to know Sarah, the granddaughter of the nearest neighbors, an elderly couple who are the owners of the house Jax and his parents are renting.  The authors stressed the importance of conserving the the woods and I enjoyed the conversations between Jax and his dad.  The authors dealt with the subject of man’s “progress” and how it affects our planet and all of it’s inhabitants.

Will Jax and his friends know what to do when the woods are threatened by an outside source?  Will they be able to save the glen?  You’ll have to read Oldenglen to find out, I really enjoyed it and look forward to reading the next book in the Oldenglen Chronicles.

a Rafflecopter giveaway
Posted by Maria at Tuesday, February 02, 2016