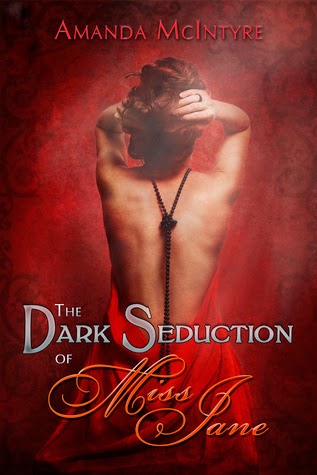 The Dark Seduction of Miss Jane
By Amanda McIntyre

Blurb:
A scandalous betrayal sets Miss Jane Goodwin on an unexpected journey to London to pursue her dream of being the first female investigative journalist, but she soon finds herself in a hotbed of murder and controversy. Seduced by the passions of a mysterious lover and stalked by a madman, tensions mount as Jane falls prey to her desires, only to discover a deadly secret that threatens more than just her trust in men.

Inspector Randolph Mansfield is one of Scotland Yard’s elite, battling the dark secrets of his past while trying to solve a rash of grisly murders threatening to mar Queen Victoria's Jubilee. His respite is the anonymity he finds in the decadence of a private gentleman’s club, until a determined American journalist goes undercover in search of her stalker and he finds the lines between protection and passion blurred. But as tensions heat and her life is threatened, he must choose whether to reveal his true identity at the risk of losing her trust and his career.

My parents believed that women should be independent and capable. What is your thinking along those lines, Mr. Hampton?” she asked, purposely goading him.

He emitted a long-suffering sigh. “I do find a capable woman refreshing, Miss Goodwin. I have no qualms with a woman who wishes to be independent and, moreover, isn't afraid to speak her mind.”

She slid him a glance. “Indeed, I think your aunt is correct. You are a charmer.”

He shrugged. “A woman can profess to be independent in many things, but there are still times when a man’s involvement is necessary.”

“That is quite enough, Wesley Hampton,” his aunt spoke.

“Name one,” Jane fired back as she crossed her arms.

“Jane!” Isabella turned in her chair and pinned Jane with a shocked expression.

Wesley’s mouth curled into a wicked smile. He lifted his brow and set down his cup.

“A conversation left to another day

Amanda McIntyre grew up the daughter of a father who was a distributor for a New York magazine publishing firm, and usually had her nose stuck in the latest issue of Vampirella magazine or a Hitchcock Mystery paperback. She has been called  "a true artist in the writing realm' and her zest for life inspires her "character-driven" stories. Her passion is to take ordinary people and place them in extraordinary situations. She is a best-selling, multi-genre hybrid author and has received numerous awards and nominations for her work. Amanda is published internationally, in audio, e-book and in print. She currently writes sizzling contemporary cowboy romance and is about to release her first historical erotic thriller.

You can find Amanda here: