Welcome to my stop on the Book Blitz, presented by Xpresso Book Tours, for Forevermore by Cristiane Serruya.  Please leave a comment or question for Cristiane to let her know you stopped by.  You may enter her tour wide giveaway by filling out the Rafflecopter form below.  Good Luck! 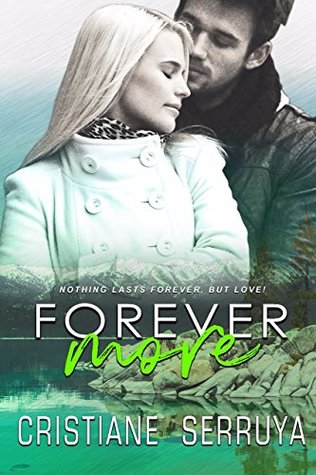 A father desperate to save his little girl. A doctor fighting for a cure. And two broken hearts that can only be healed together.

Ava Larsen is too busy finishing her pediatric oncology residency to find love… and she knows what it feels like to have a broken heart. She assures herself that kissing the gorgeous alpha stranger the night before was nothing more than a dangerous yet delicious mistake— one she won’t repeat.

Widower billionaire Aleksander Maximilian is one of the most powerful men alive, but he’s helpless to save his daughter Olivia from cancer. Doctors have assured him it would be best to enjoy her last days at home. To make Olivia’s wish to spend her last Christmas on Lake Tahoe come true, he hires the best home care team in the business.

It turns out the head of the team is the breathtaking woman he shared an unexpected kiss which ignited sparks. But this is the worst time for Aleksander to have finally have passionate feelings for someone, not to mention it’s strictly forbidden to Ava to get involved with her patient’s father.

Tragedy brought them together. A miracle might rip them apart.

Sequel to So Much More, FOREVERMORE stands on its own, but reading in order guarantees a more enjoyable time.

It was a death sentence he carried.

And, at the same time, it was a freeing edict.

“She has only two months, three at most. You should take her home.”

The words said in a soft and compassionate male voice a few minutes ago still boomed in Aleksander Maximilian’s mind as he made his way to Olivia’s hospital room.

Fourteen months ago, when he was first told that his now eight year-old daughter was suffering from what might turn out to be a terminal illness, he and his wife, Rachel, grasped onto hope with a stranglehold.

Thirty-nine years old at the time, he was already one of the most powerful and influential men in the United States, and if the statistics said there was a chance his daughter could live, then live she would.\

He forced himself to smile before he pushed open the door and saw a sleeping Olivia and her inseparable golden retriever. Toddy raised his golden head, ears perked, and identified the intruder as Aleksander, then dropped  his head back down on Olivia’s thigh.

One of Olivia’s private nurses, Sydney Campbell, rose from the chair beside her bed. “Good morning, Mr. Maximilian.”

“Hello, Sydney.” He brushed a hand over Toddy’s head. “Is she too tired again today?”

“Not really.” Sydney smiled and added, “She and Toddy joined the visiting dogs and other children and they had a busy morning. She’s just taking a nap.”

“You can take a long snack break,” he said to her, and when Sydney opened her mouth, he added, “I’ll message you if she needs something.”

Aleksander loved that the staff here genuinely cared about their patients. Either that, or they do an excellent job of faking it. I’m becoming cynical. He took off his jacket, put it on the bureau, and before he went into the adjoining bathroom to wash his hands, he turned back to Sydney and said, “We’re going home tomorrow.”

He saw sadness come over the young nurse’s face—but not surprise—as she nodded, and it just made the weight on his heart even heavier. So, there is really no hope at all.

He avoided looking at himself in the mirror as he washed his hands. It had been a few weeks since they informed him that Olivia’s brain tumor was not responding to chemotherapy, but he continued to hope while the doctors kept the treatment going.

Back in the room, he took Sydney’s seat and caught Olivia’s thin hand in his. The girl let out a contented sigh as if she knew her father was there but she didn’t wake up.

When he buried Rachel, barely one month after Olivia was hospitalized, he made a promise on her grave that he would move mountains and wouldn’t leave a stone unturned until Olivia was cured.

And he had unturned stones all over the world. From a German pediatric oncologist to a British neurosurgeon—including a Brazilian spiritual surgeon and a Canadian shaman—a parade of doctors—and curious practitioners of various healing arts. He’d flown all of them to Manhattan to consult his daughter.

Yet, all his wealth and influence had not provided a cure for her. Now, his sweet little Olivia had only two months—three, at most—to live..

I have failed you, Rachel. His lips turned down and he had to blink to whisk away the tears gathering in his eyes. I failed you both.

Before she left the room, Sydney paused by him and softly put a hand on his shoulder. “I’m so sorry, Mr. Maximilian.”


Aleksander swallowed the lump in his throat and whispered, “So am I, Sydney. So am I.” 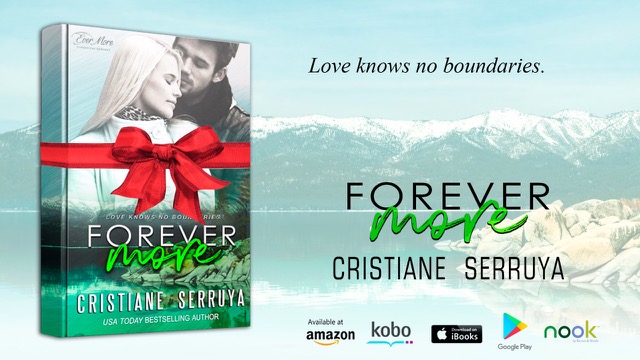 4 reasons why I LOVE to write romances!
Guest post by Cristiane Serruya

Hello and thanks for hosting me. I’m so happy to be here with you and your readers today.
Since 2011, I’ve been immersed in the written word—penning romance novels, to be exact. The process of crafting and getting a work through the publishing machine—especially the indie world—can be a lonely and hard path but when my new imaginary friends walk out of my romances, they’re worth all of grueling pain I submit my wrists and fingers to. Here are four reasons why I have been hooked by love stories.

1. The Characters
The men! Handsome or scarred, funny or brooding, overbearing or supportive. Dark-haired, blond, paled skin, tanned and everything in between! Now put them together with blondes, brunettes or red-heads; thin or curved or toned; opinionated and bold or delicate and shy! Oh, my! To make it even better, throw in a couple of kids—I love stories with smart kids! Of course, makes it even funnier if we have a few criminals in the story, too. There, I have a bunch of new friends—and enemies—for me to play with for a while.

2. I Get to Create Stories
Imagine those said characters meeting over a business meeting, as in The Complete TRUST Series; or fighting for a cure for a sick child, as in Forevermore, and the sparks flying over a heated argument or a nice gesture.

And then imagine them doing it. Yeah! And some revengeful ex-partner or dark secret, which threatens their relationship. I decide who loves and hates; who lives and dies! I can totally transform a person I know in a good or a horrible character. I can even take my revenge on the ones I don’t like much and create a whole new ending for a situation gone wrong. It’s freeing!

3. The Research
Learning is a passion of mine. In order to create believable characters, research is necessary. For example, Tavish Uilleam MacCraig, the lead male character of Love Painted in Red, who appeared on my first release Entwined Fates, TRUST Series #1 and was supposed to be a secondary character, grew so much as a character during TRUST Series that he demanded his story to be told. As it unfolded, and from it I have already Damaged Love, which features Tavish’s best friend, Lord Richard Smith, and after comes the story of Richard’s older brother, Lord Hugh Smith.

All the three of them are veterans of war—I am always in awe of those men and women who sacrifice themselves to make this world safer.

We don’t have a strong military here in Brazil and I wanted them to be believable veteran dealing with PTSD, living with disabilities, having invisible scars, for the readers to feel their pains. So I interviewed many veterans online. It was an enlightening and heartbreaking experience and it helped me make Tavish and Richard come out beautifully—or so I like to think—with their physical and psychological scars and yet full of life strength and vigor.

4. The Happily Ever After
With all the horrible things happening in the world, unnecessary killings, religious and racial strife, it’s great to be able to escape to a world where my characters have survived bad things and are still able to find a fulfilling and healing relationship with a happy ending—and don’t forget the steamy sex I got to create. But sometimes, I get out of a story emotionally tired; so tired, I need a break.

It was exactly the case of Forevermore, Olivia, Alek, and Ava’s heart-wrenching and heart-warming story that I needed a break before I jump into the skin of Benedict, who is blind, and Natalya, from Evermore. Ah, what did I do during my break? I wrote a light, funny and suspenseful romance. So, pre-order already Royal Love, Last Royals Series #1.

Last, I want to share some good news. Almost all my books are on KindleUnlimited, so visit Cristiane Serruya’s Amazon Page and read them for free!

Those who want to receive my very, very sporadic emails about new releases and promotions can sign-up here: Cristiane Serruya Website and win a free romance, free cookbooks, and so much more!

Thank you for the opportunity to share my thoughts here and helping me promote my work.
Love,
Cris, author 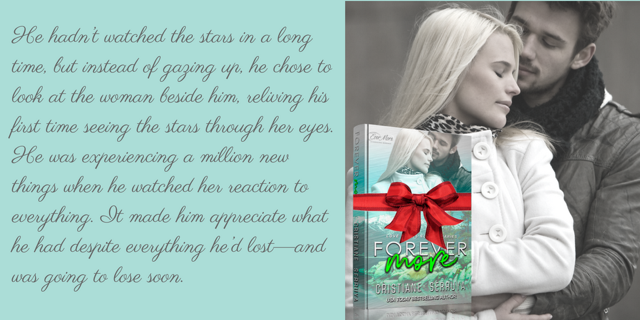 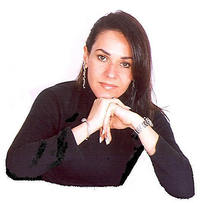 USA TODAY and AMAZON best-selling romance author, Cristiane Serruya lives in Rio de Janeiro, Brazil, with her six-foot-six husband, two teenage daughters, and Loki, her Shetland sheepdog. Cris is a writer, a lawyer, a reader; a woman, a mother, and a wife. Not necessarily in this order. Or in any order…


She has a Master's in Business Law and a BA in Fine Arts. In 2012, after twenty-two years of practicing law, Cris decided to give writing a go. And--amazingly--it was just the piece that was missing in the puzzle of her life.


She loves to hear from readers so fell free to stalk her online and visit www.crisserruya.com to win a freebie left there only for you.


Those who want to receive Cris's very sporadic emails about new releases, giveaways, and promotions can sign-up on http://bit.ly/CS-VIPlist