Welcome to my stop on the Blog Tour, presented by Pure Textuality PR, for It’s Hard Out Here For A Duke by Maya Rodale.  Please leave a comment or question for Maya to let her know you stopped by.  You may enter the tour wide giveaway below.  Good Luck!

It’s Hard Out Here For A Duke
by Maya Rodale
Keeping Up With The Cavendishes, Book 4

When American-born James Cavendish arrives in London tomorrow, he’ll become the Duke of Durham. Some might be ecstatic at the opportunity. Not James. He’s a simple man, fond of simple pleasures. And right now, nothing could be more pleasurable than spending his last night of freedom with a beautiful stranger.

Are Far Too Good…
One wild night, Meredith Green, companion to the dowager Duchess of Durham, said yes to a man she thought she’d never see again. Suddenly, they’re living under the same roof, where Meredith is expected to teach James how to be a duke-while trying not to surrender to temptation a second time.

To Be Forgotten.
For a duke and a commoner, marriage would be pure scandal. Yet nothing has ever felt as right as having Meredith in his arms…and in his bed. Soon he must choose-between a duty he never desired, and a woman he longs for, body and soul… 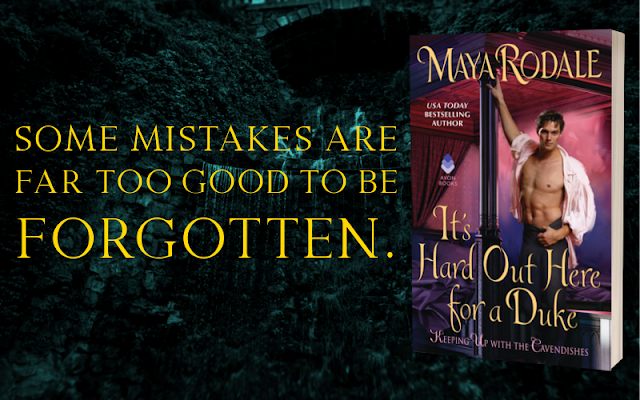 Though Miss Meredith Green lacked birth, or wealth, or many other qualifications one would assume of a gently bred lady, she had been raised to be one. She could curtsy with the best of them, expertly arrange both flowers and seating arrangements for dinner parties, and could recite pages from Debrett’s Book of the Peerage. These were just a few of her accomplishments.

As such, she should not be here, in the public room of the Queen’s Head Tavern and Coaching Inn. Especially not alone and especially not at night, where any old ruffian might think he could take a liberty with her, to put it nicely.

Which is why she should not have allowed the barmaid to add a generous splash of whiskey to her tea.

Which is probably why she was encouraging the ocular advances of a handsome man with whom she was not acquainted.

Meredith had noticed him the moment he walked in, tall and lanky but strong, with unfashionably long brown hair that fell rakishly in his eyes. What color were they, she wondered? She didn’t need to know. There was nothing she could do with this information. There was absolutely no point to her knowing.

She badly wanted to know.

So she dared one glance, then another.

Her better judgment was roundly ignored. Before she knew it they were somehow flirting from opposite sides of the room without even saying a word.

It was the sort of thing that made a girl’s heart beat giddily and her toes start to tap under her skirts. Thanks to years of training, she kept her posture poised and her movements elegant, but under her skirts, her toes were tapping.

This, this was what she need tonight: a distraction. The past few months had been trying, and the next few promised to be challenging as well, albeit in a different way. She had only tonight to live for herself.

She darted another look in his direction.

He was watching her. This truth elicited a slight smile from her lips. But she shouldn’t take pleasure in this.

She ducked her head.

But her heart beat quickly and she wondered: Would he come over?

He shouldn’t. He really should not. She absolutely should not encourage him. But life was full of should-nots, and tonight Meredith wanted to say yes.

It had been a bit of a day—on top of quite a week, and one hell of a month. Or two or three. Her visit to her ailing mother in Hampshire revealed a dispiriting truth: the life choices of Miss Meredith Green were few, and less than thrilling. Nevertheless, she had made her choice to return to London and live the restrained and dignified life of a lady’s companion.

Emphasis on restrained. When one relied on one’s spotless reputation for her very existence, one comported herself accordingly. One did not give or receive heated glances across crowded rooms.

But Meredith embarked on a little whiskey-infused rationalization: until she stepped foot in London, she could afford to live a little loosely. For one night, she might indulge in the sort of wicked behavior—and passion—that she’d have to refuse forevermore.

That was just the splash of whiskey talking, she told herself. It was just the strain of recent events wreaking havoc with her common sense. It was her mother’s bad influence. She’d had the great luck to be raised to be A Lady. She oughtn’t forget that.

His gaze sparkled. Like he knew what inner turmoil and rationalization his glances inspired. This time, she didn’t look away.

Oh, goodness, he was coming over. Her heart beat faster and faster as his long strides brought him closer and closer until he was standing beside her, leaning casually against the bar.

Gentlemen did not lean.

MAYA RODALE began reading romance novels in college at her mother’s insistence. She is now the bestselling and award winning author smart and sassy romances. She lives in New York City with her darling dog and a rogue of her own. 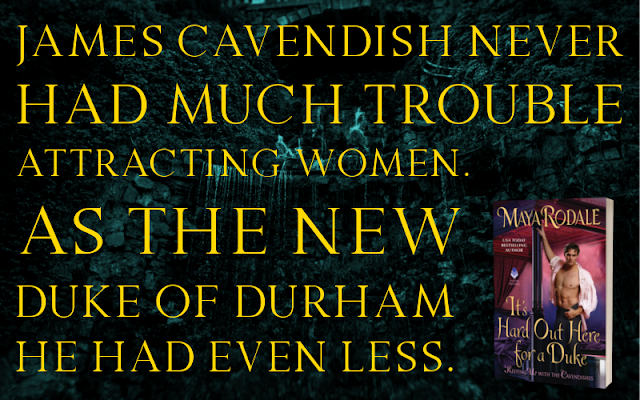 GIVEAWAY TERMS & CONDITIONS:
Open to US shipping addresses only.
One winner will receive a paperback set of the first three books in the Keeping Up With the Cavendishes series by Maya Rodale.
This giveaway is administered by Pure Textuality PR on behalf of Avon Romance.
Giveaway ends 12/12/2017 @ 11:59pm EST.
Avon Romance will send the winning copies out to the winner directly.
Limit one entry per reader and mailing address.
Duplicates will be deleted.