Welcome to my stop on the Blog Tour, presented by Pure Textuality PR, for Beautiful Lawman by Sophie Jordan.  Please leave a comment or question for Sophie to let her know you stopped by. You may enter the tour wide giveaway below.  Good Luck!

From the wrong side of the tracks and with most of her family in jail or dead, Piper Walsh is used to everyone in town thinking the worst about her. It doesn’t seem to matter that she’s worked hard to build a good life for herself. So she isn’t surprised that when she comes into contact with Sweet Hill’s wildly irresistible, arrogant sheriff, Hale Walters, they’re instant adversaries. Piper has nothing in common with the town golden-boy-turned-lawman—and she refuses to be a notch on his bedpost.

Despite rumors, Hale avoids fooling around with the women of Sweet Hill, many of whom are hoping to get him to the altar. But staying out of Piper’s path is proving near impossible. The infuriating troublemaker clearly has no respect for his badge. As she continues to push his buttons, it becomes clear to Hale that he must either arrest Piper—or claim her as his own. 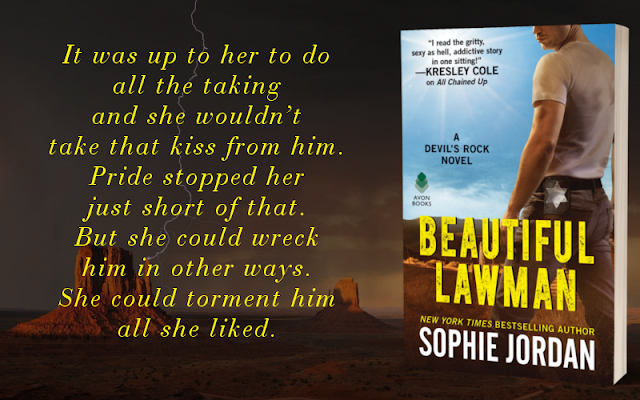 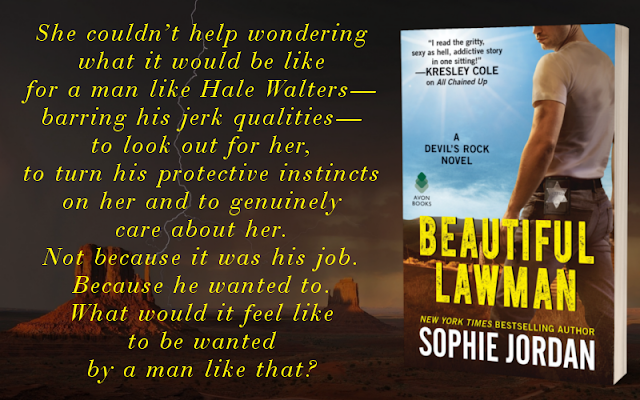 “Found her,” the desk clerk trilled as though Malia had been lost somewhere in the back—clearly oblivious to the tense undercurrent between them.

Piper grasped Malia by the elbow and tugged her close beside her. She pasted a smile on her face for the benefit of the older woman. “Thank you so much. Is there somewhere I have to sign her out? Or do you need to check my identification or—”

“Ah, yes.” She clapped her hands lightly and scurried behind the broad desk again. “It’s right here. The other parents already signed out their children . . .” She looked up and eyed Piper. “You hardly look old enough to be her parent.”

“No, I’m her sister, but her legal guardian.”

“Ahh. That explains it. You two are mirror images of each other. Cute as two kittens.”

Malia giggled as the woman resumed searching through the clutter of her desk.

Piper reached deep for patience even though a part of her marveled at how this woman fared in emergencies where speed was required. She did work in a sheriff’s department, after all. They had to have the occasional need for urgency.

Footsteps sounded, thudding deeply across the floor. Her nape prickled in awareness.

She looked up just as a tall figure emerged from the hall, a big dark shape etched against the pale beige backdrop of the building’s interior.

Her throat closed up at the sight of the deep blue uniform with its shiny brass bits. At first it was all she noticed. The only thing. It was familiar enough. As was her physical reaction to the sight of it. She supposed it was an unhealthy reaction. And abnormal. The sight of a policeman’s uniform should provide comfort. But for her it never signified anything good to come.

Her gaze crawled over the uniform—and There was a considerable amount of it. Not just in breadth, but in height, too. The body that filled out the uniform was muscled and tightly built. Not an inch of fat anywhere on his bulk.

She dragged a breath in and forced her attention to his face as dread pooled in her stomach.

He would have to be on duty the one time she came here. She had feared coming face-to-face with him the moment she parked outside. Her brother’s friend, North, had warned her that he was a powerful man, the implication being that she should give him due respect. Only she hadn’t done that. Hopefully she wouldn’t pay for it now.

She squared her shoulders, bracing herself for the moment he looked up and saw her. Maybe he wouldn’t recognize her. He’d seen her just once, after all. In a darkened club, no less.

She stifled a snort. Wishful thinking. She doubted he had forgotten the first time they met. If that encounter in Joe’s could even be called a meeting. The pitcher of ice water in his lap would have made a lasting impression.

Braced or not, when he looked up she was caught off guard.

Nothing could have steeled herself for the weight of those gray eyes. Somehow she had missed their magnitude in the dimness of Joe’s, but she felt the intensity of them now. In one sweeping glance, he took in their trio before advancing in a long-legged stride.

He remembered her, all right.

Damn his voice was deep. Full of gravel. It sounded like sex.

The completely inappropriate thought hit her out of nowhere. For starters, she could hardly count herself as an expert on sex. And secondly . . .

this was Hale Walters. A rude, arrogant cop quick to judge. He was everything she despised.

She’d heard him speak in Joe’s but the music had been loud and she’d found him so offensive with his remarks that she hadn’t absorbed the gritty drawl like she did now in the stark quiet of the sheriff’s department.

“Sheriff,” she greeted, the word escaping as a treacherous tremor.

As he drew closer she was only more painfully aware of his size. He’d been sitting that time in Joe’s. She had no idea he was this big. This tall. He had to be pushing six-five.
She tugged her cardigan closer around her, feeling suddenly fragile in comparison.

His gaze drifted to Malia. “Your sister, I presume?”

“Appears she got into a bit of trouble tonight.”

Her jaw clenched. The desk clerk had said as much, but she resisted nodding assent to him. Everything about him rubbed her the wrong way.

“Found it!” The older woman brandished a clipboard and abandoned her desk to offer it to Piper. “Just sign here.”

The sheriff plucked it from her hands just as Piper was about to take it. “Thank you, Doris.”

Doris beamed and turned for her desk again.

Piper stared at the sheriff expectantly, waiting for him to hand over the clipboard so she could be on her way.

Instead, he held it in his hands and looked in no hurry to pass it to her.

He and Piper stared at one another for an awkward stretch of silence. As the seconds ticked, her resentment grew. He couldn’t just be linebacker big. No. He had to be hot as sin, too.

Malia looked back and forth between the two of them mildly, taking a slurping sip from her can of orange soda.

Piper lifted her chin a notch. “Are you gonna let me sign that? Or just keep me standing here? It’s late.”

Malia’s eyes widened. Piper knew she was setting a bad example. She’d told her sister time and time again to always be respectful to authority figures. Even when it was hard. And here she was throwing sass at the county sheriff. She couldn’t stop herself though.

The corner of his mouth kicked up. It was almost a smile. Only his eyes didn’t smile. They stared coldly. “You know I thought my memory of you might have been wrong, Ms. Walsh.”

“It wasn’t though,” he finished.

And she was quite certain that was an insult.

“You two know each other?” Malia asked.

“No,” she snapped. “We don’t know each other at all.” She lifted her chin, making sure he understood that she didn’t want to know him.

This time both corners of his mouth lifted in a full-blown smile. It was devastating. Unfairly, it made him even more attractive. She bet the women in this town threw themselves at him.

And that only annoyed her more.

To celebrate the release of BEAUTIFUL LAWMAN, we’re giving away one paperback set of the DEVIL’S ROCK by Sophie Jordan.

GIVEAWAY TERMS & CONDITIONS:
Open to US shipping addresses only.
One winner will receive a paperback set of the Devil’s Rock series by Sophie Jordan.
This giveaway is administered by Pure Textuality PR on behalf of Avon Romance.
Giveaway ends 1/5/2018 @ 11:59pm EST.
Avon Romance will send the winning copies out to the winner directly.
Limit one entry per reader and mailing address.
Duplicates will be deleted.

Sophie Jordan grew up in the Texas hill country where she wove fantasies of dragons, warriors, and princesses. A former high school English teacher, she’s the New York Times, USA Today and international bestselling author of more than twenty novels. She now lives in Houston with her family. When she’s not writing, she spends her time overloading on caffeine (lattes preferred), talking plotlines with anyone who will listen (including her kids), and cramming her DVR with anything that has a happily ever after. You can visit her online at www.sophiejordan.net.