Blog Tour & #Giveaway for The Pretender by Helenkay Dimon

Welcome to my stop on the Blog Tour, presented by Pure Textuality, for The Pretender by Helenkay Dimon.  Please leave a comment or question for Helenkay to let her know you stopped by.  You may enter the tour wide giveaway by following the giveaway link below.  Good Luck!

They say it takes a thief to catch a thief, and Harrison Tate is proof.

Once a professional burglar, he now makes a lawful living tracking down stolen art. No one needs to know about his secret sideline, “liberating” artifacts acquired through underhanded methods. At least until one of those jobs sees him walking in on a murder.

Gabrielle Wright has long been estranged from her wealthy family, but she didn’t kill her sister. Trouble is, the only person who can prove it is the sexy, elusive criminal who shouldn’t have been at the island estate on that terrible night. She’s not expecting honor among thieves—or for their mutual attraction to spark into an intense inferno of desire.

Under the guise of evaluating her family’s art, Harris comes back to the estate hoping to clear Gabby’s name. But returning to the scene of the crime has never been riskier, with their hearts and lives on the line.

“I’ve gotten used to looking over my shoulder.” She popped the cracker in her mouth but she really couldn’t taste it.

“Is this the part where I’m not allowed to pretend ignorance?”

She was impressed he’d actually listened this afternoon. That was more than most people did. But it didn’t mean that she wanted to revisit any part of that topic.

With a hard swallow, she got the cracker down then dumped the rest on the bench between them. “How exactly does one become an art appraiser?”

That sexy smile of his came roaring back. “We’re changing the subject?”
She nodded. “Without even an ounce of subtlety.”

The rich sound of his laugh floated through the dark night. “Then the answer is easy—misspent youth.”

“What are you talking about? Art appraising sounds like something wealthy people would be into. Like, I’m looking at you and thinking private-school boy.” She studied his face and hummed as she tried to pin him down, figure out his untold story. “Maybe even a boarding school.”

He snorted. “Your people-reading skills are way off tonight.”

That answer . . . it had her wanting to know more. She beat back the urge to pepper him with questions. If she took a turn, he would want one. No way.

She pointed at the gooey s’more oozing between his fingers. “Blame the marshmallow.”

“They’re growing on you.”

He held up a hand and wore a look of fake outrage. “Honestly, you keep talking like that and I’ll have to leave the island.”

“I wish I had that option.” She hadn’t meant to say that, but the words were out there now.

His head snapped back as he looked at her. “Do you really have to be here?”

“I owe it to Tabitha.” And it was a debt Gabby took seriously. Her sweet, loving sister deserved so much more than the end she got. The idea of her dying alone and afraid twisted Gabby’s insides into knots. She had faint memories of a man and footsteps that horrible afternoon, but Tabitha was gone by the time Gabby reached her. “Someone needs to care about what really happened to her.”

“Too many, actually.” Someone looking for cash. Some jerk hoping to find a woman alone. Every option centered on the hazy figure she saw leaving the house. The one she’d almost convinced herself she’d dreamed up.

“Are you really not going to sleep inside tonight?” he asked.

“I might sleep on the porch.” That was the plan. There or the boathouse, where there’d be some protection from the wind.

She’d thought about knocking on Kramer’s door but his son was on the island, trying to catch up on maintenance that had been limited when the police shut down the island to everyone to conduct an investigation. Poor Kramer got displaced for a few months. Once he came back the police limited the work he could do. So did the wrangling over the estate be- cause Tabitha’s trust fund had been frozen. But now that Kramer was back, he was behind on all but the most routine work. She knew because he’d grumbled about that while they shared breakfast at his house this morning.

“It’s freezing out here.” Harris rubbed his hands together in front of the fire as if to prove his point.

“I’ll be fine.” When he started to say something, she talked over him. “I’m serious, Harris. I can’t be in the house. Not yet. Tomorrow, maybe. In the light.”

He didn’t need to finish the sentence because she knew where he was going. “Since I found her body? No.”

He let out a long, loud breath as he wrapped up the chocolate bar again. “Take the guesthouse.”

The idea sounded so much better than any other option. She’d stayed there on and off with Tabitha since their parents died. Her sister loved the solitude of island but Gabby always worried the lack of companionship would prove to be too much. She stopped in. She swung through. She came up with excuses to be there for days at a time with her sister before jumping off again.

“Where would you sleep?” A not entirely unwelcome idea formed in her brain. “Or was that a really sloppy pass?”

“Sloppy?” He shook his head. “Woman, come on. It takes skill to look debonair while having your fingers stuck together with marshmallow.”

He held up his fingers to show her.

“You’re right,” she said, ignoring the fact he pulled off the look just fine.

He picked up the chocolate bar then dropped it again. “Melting chocolate. I mean, I’m balancing a lot over here.”

He really was adorable. Sexy and hot in a want-to- climb-him way, but kind of sweet, too.

Too bad she thought it was all a very calculated act. “You’re very impressive,” she said in the most condescending voice she could muster.

“Thanks for noticing.” He wiped his hands on a paper towel and put the rest of the s’mores ingredients away. “But the offer still stands. The guesthouse has a couch and a floor. I can sleep on one of those.”

“No.” The offer should have been easy to resist but she had to force the denial out. She stood up, thinking leaving might be the only way she could win this round. “I’ll be fine.”

He glanced up at her. “I get the impression you’re always fine, Gabby.”

“Then you’re not looking very closely.” 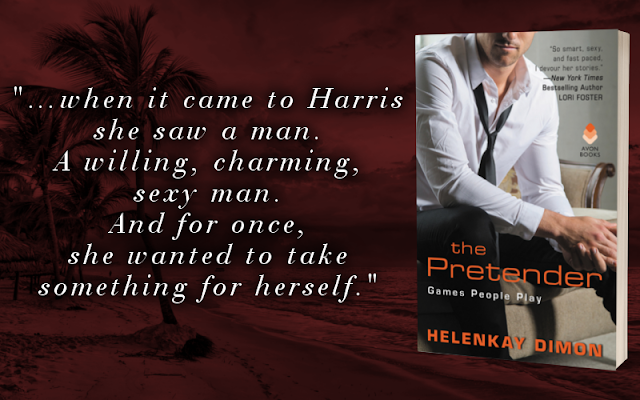 HelenKay Dimon spent the years before becoming a romance author as a…divorce attorney. Not the usual transition, she knows.

Good news is she now writes full time and is much happier. She has sold over thirty novels, novellas and shorts to numerous publishers, including HarperCollins, Kensington, Harlequin, Penguin, Samhain and Carina Press.

Her nationally bestselling and award-winning books have been showcased in numerous venues and her books have twice been named “Red-Hot Reads” and excerpted in Cosmopolitan magazine.

She is on the Board of Directors of the Romance Writers of America and teaches fiction writing at UC San Diego and MiraCosta College.

GIVEAWAY TERMS & CONDITIONS:
Open to US shipping addresses only.
One winner will receive a paperback set of the the first three books in the Games People Play series by HelenKay Dimon.
This giveaway is administered by and the responsibility of Pure Textuality PR.
Giveaway ends 1/5/2018 @ 11:59pm EST.
Avon Romance will send the winning copies out to the winner directly.
Limit one entry per reader and mailing address.
Duplicates will be deleted.