Virtual Tour & #Giveaway for In Her Own Time by Christine Potter

Welcome to my stop on the Virtual Tour, presented by Bridging the Gap Promotions, for In Her Own Time by Christine Potter.  Please leave a comment or question for Christine to let her know you stopped by.  You may enter her giveaway by answering the questions below and filling out the Rafflecopter form.  Good Luck! 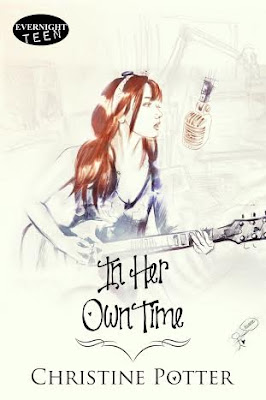 In Her Own Time
by Christine Potter
The Bean Books, #2

Summer 1970: Bean Donohue’s sixteen, she’s finally got a good band together, and she’s crazy in love with her artist boyfriend Zak. She’s also about to get the coolest summer job ever, and her impossible mom’s conveniently out of town.

So why does she keep ending up in 1953…or 1779?  And who's that guy with the black ponytail and the Kent State t-shirt?  He knows way too much about her.  Should Zak be worried—or should Bean?

14+ due to sexuality and adult situations

Bean found herself alone, just outside the house. The air was sharp. Tall trees that had just been in full summer leaf were suddenly bare, and smaller than they’d been seconds before. Bean tried to peer back in through the kitchen window, but the lights were off, and she couldn't see anything. She stood in her side yard, sometime in the past. It was happening again…

And It was enough of a shock that she didn’t even know how she felt. She’d been glowing from the night before with Zak, happy to have had Sam pound on her door with music and laughter. Bean stuck her hands in the pockets of her thin blue cotton robe, and looked up. The sky looked like early afternoon: pale sunlight behind a thin, high layer of clouds. In front of her house, underneath the living room windows stood three overgrown barberry bushes. Bean had never seen them before. The ground was hard and cold, and she was barefoot.

Alrighty, then. Damn it. Lately, Bean had been perfectly fine with life in 1970. What year is this supposed to be? She had no idea.

Zak said love is always why this happens, she thought. But then she felt the happiness beginning to leak out of her. If Zak were right, why had she slipped backwards just now? She had a whole June weekend to spend with him, feeling nothing but love…and now, this.

It made no sense. All she could do was watch, deal, and try to keep warm.

It really was pretty chilly. She tried jogging in place to warm up, which helped a bit. Her toes were soon numb, though.  After a few minutes, a black car with big, round bumpers pulled into the driveway and clattered to a halt. There was the rasp of an emergency brake being set.  And Bean’s father—very young, and too thin for his thick, grey winter coat—got out of the driver’s side. Bean put a hand over her mouth, and watched as he ran urgently around to the passenger’s door. He yanked it open.


“Can you make it?” Bean’s dad called into the car.

“Of course I can make it,” said her mother’s voice. A high-heeled shoe and a nylon stocking-covered leg emerged. Then came the rest of Bean’s mom, wearing a brown tweed overcoat and a floppy green beret. She walked a bit unsteadily, clutching a bundle of white blankets wrapped around a baby, which began to wail.

“Sh-sh. Sh-sh-sh,” said Julia as she wobbled up the walk. She stopped when she got to the front door.

“You wouldn’t happen to have remembered the house keys, would you, Tom?” she called.

Tom patted down three pockets in his coat before something jingled. He rushed a key into the lock. Then he looked back at the car. Both its front doors now stood wide open, and he sprinted back down the walk toward them. Bean sucked in her breath hard, taking it all in. Was that her days-old self,crying, inside the house? Sixteen-year-old Bean felt a little weepy, too.  It’s 1953, then, she thought. Just after my actual birthday. Wow…

The wind blew and she shivered.

And then there was a hand on her arm. 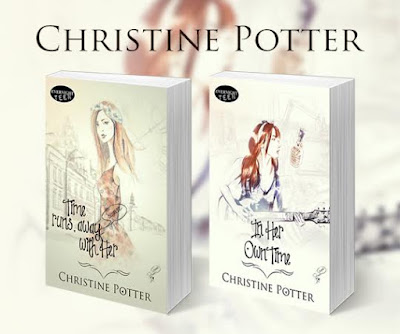 Book 1 in The Bean Books series
is now available:

Time Runs Away With Her
Evernight Teen  Amazon   ARe 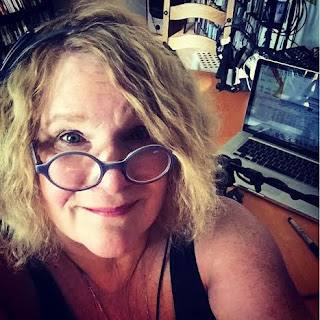 Christine Potter lives in a small town not far from the setting of Time Runs Away With Her, near the mighty Hudson River, in a very old (1740) house with two ghosts.  According to a local ghost investigator, they are harmless, “just very old spirits who don’t want to leave.”  She doesn’t want them to.

Christine’s house contains two pipe organs (her husband is a choir director/organist), two spoiled tom cats, and too many books.  She’s also a poet, and the author of two collections of verse, Zero Degrees at First Light, and Sheltering in Place. Christine taught English and Creative Writing for years in the Clarkstown Schools.  She DJ’s free form rock and roll weekly on Area24radio.com, and plays guitar, dulcimer, and tower chimes.

Please leave your answer to these questions in the comments :)

1. Suppose you were my main character, Bean.  What time period would you like to be swept back into--and why?


2. These books believe in ghosts.  Do you?  Ever seen one?
a Rafflecopter giveaway
Posted by Maria at Friday, August 05, 2016