Spotlight & #Giveaway for The Cat, The Collector and the Killer by Leann Sweeney 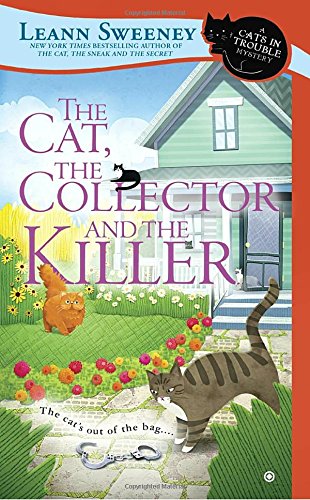 The Cat, The Collector and the Killer
By Leann Sweeney
Cats in Trouble Mystery, Book 8

In the latest mystery from the New York Times bestselling author of The Cat, the Sneak and the Secret, a cat collector is suspected of murder.

Jillian Hart and police chief Tom Stewart are enjoying peaceful, newly wedded bliss in Mercy, South Carolina, until a woman is found wandering the streets one night. She's in her night clothes, disoriented, and carrying a kitten in a tote bag. A search of the woman’s house reveals many more cats, a maze of cardboard boxes—and a dead man.


Although the evidence suggests the frail woman is the killer, Jillian doesn’t believe she’s capable of such a crime. The dead man had many enemies in town, which means finding the real murderer may prove to be its own cat and mouse game...

Leann Sweeney was born and raised in Niagara Falls and educated at St. Joseph’s Hospital and Lemoyne College in Syracuse, NY. She also has a degree from the University of Houston in behavioral science and worked for many years in psychiatry and as a school nurse; she now writes full time.

She began crafting fiction in 1980, fulfilling her lifelong dream. After perfecting her skills with classes and a small fortune in writing books, she joined MWA and Sisters in Crime. Now she’s the creator of two NAL/Obsidian mystery series: The Yellow Rose Mysteries and the Cats in Trouble Mysteries. The Cat, The Quilt and The Corpse, first in the Cats in Trouble Mysteries was the #1 bestseller on the Independent Mystery Bookseller’s List when it debuted and made several top twenty lists for 2009 at bookstConores across the country. Since then, The Cat, The Lady and The Liar and The Cat, The Wife and The Weapon climbed all the way to the NY Times bestseller list for mass market paperbacks.


Giveaway (US & International) sponsored by
Queen of All She Reads
a Rafflecopter giveaway
Posted by Maria at Tuesday, August 02, 2016