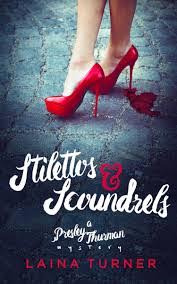 Presley tells her boss what he can do with her job in HR and embarks on a new career as a freelance journalist. What seems like a simple interview with a Senator turns to murder when the day after her interview the Senator turns up dead. Does the fact that Presley was one of the last people to see him alive make her a suspect? Her ex-boyfriend Cooper, who was in charge of the Senators security, might think so. Presley is determined to clear her name but can she do it and resist Cooper’s charms?

“I heard Helen was having an affair,” I blurted out.

“What?” Ruth exclaimed. Her eyes narrowed, and crossing her arms in front of her chest, she gave me a dirty look. “What right do you think you have, asking these questions?”

“Well, if she were that would be a motive for someone to kill Tom, wouldn’t it?” I continued. Ruth was clearly unhappy to hear me talking about this, so I added quickly, “Not that anyone would blame Helen or anything—”

Ruth interrupted. “First of all,” she said coldly, “Helen is not having an affair, and if she were, that’s not anyone’s business but hers. And they’re not having money problems. Or any other problems for that matter.”

“Second, you should be ashamed of yourself, spreading these kinds of lies about Helen and Tom.” She continued with her rant. “Have you no shame? Helen just lost her husband, and you are accusing her of cheating. And murder.”

“Ruth, I’m not accusing Helen of anything,” I said, hands on hips, trying to act indignant, which wasn’t that difficult as Ruth was making me feel defensive. I wasn’t trying to say anything bad about Helen. Each to his own and all that. “From all I’ve heard, she was entitled to have an affair with the way Tom acted.”

Ruth walked out from behind the counter and pointed to the door. “I think you should leave, Presley. I will not continue to listen to you slander poor Helen. She’s been through enough.”

I started walking toward the door when I turned back to Ruth and said, “I am not trying to start rumors about Helen. I just want to find the truth. It’s going to come out eventually. If something is going on, the cops will find out.”

“Presley, this is none of your concern.” As the door started to shut behind me, I heard Ruth call out, “Don’t think I won’t be telling your mother about this!”

I cringed at the thought, but I got the sense Ruth might be hiding something. Not that I expected her to spill all the beans, but what Ruth didn’t say, and the way she looked when I mentioned Helen having an affair, were the real clues. I hadn’t realized my HR skills would come in so handy. When interviewing job applicants, body language and what they didn’t say, usually, spoke volumes.

I tapped my fingers on the steering wheel to help me think, trying to decide my next course of action.

I decided my next stop would be Betty’s Baked Goods. Not only did Betty have the best peach cream cheese muffins in the world (I had eaten enough to know over the years and always made my parents bring me some when they came to visit), but Betty also knew everything that went on in Alkon. If there were something going on inside or outside of Helen Daniels’s marriage, Betty would know it, and Betty was not shy about spreading gossip. She always said, if you didn’t want someone to talk about it you shouldn’t be doing it. I agreed with that motto, at least when it was about other people. There were some things I would much prefer no one ever found out about—like the time I had too many cosmos and danced on the table at Muldoon’s in a skirt. Though in my defense Jared dared me, and I couldn’t turn down a dare.

I smelled the sweet treats as I walked up to the building, and deeply inhaled the heady aroma of cinnamon buns and freshly made donuts. Yum. My senses drank in the flavor. It was enough to make one drool, and I quickly swiped my chin to make sure I hadn’t.
Deep into the daydream of fresh, hot muffins, I ran into something hard. “Excuse me,” I said, looking up and finding myself face–to–face with that obnoxious security guy named Simon, who worked for Cooper. He had a coffee in one hand and a bakery bag in the other. He obviously had the same mid–afternoon snack idea I had.

“Watch where you’re going, lady.” Simon looked me up and down.

“Maybe you should watch where you’re going,” I retorted as he just stared at me.

Taste buds in overdrive, I put all thoughts of Simon out of my head. Time for a snack.

Betty’s was slow at this time of day. The only people in the bakery were a couple of old farmers talking over late morning coffee, the cook in back, and of course, Betty. I never knew of a time when Betty wasn’t there overseeing the place, making sure everyone was enjoying their food and giving them a hard time. That kind of special attention was one of the nicer things about a small-town. Back in Chicago, people barely looked you in the eye while you were eating, much less cared if you enjoyed yourself, or engaged you freely in conversation.

Betty’s back was to me when I walked in, so I snuck up behind her and said, “Any fresh peach cream cheese muffins today?”

Betty turned around, startled, and then smiled when she saw it was me. She looked pretty much the same, as if time had stood still for her. Her silver hair was pulled back in a tight bun, wisps going in many directions, and she wore her uniform of blue jeans and T–shirt with a flour–dusted apron tied around her waist. However, unlike most women her age, which was somewhere north of sixty, her blue jeans were fashionable,
distressed–looking wide–legs. And she had a sassy T–shirt saying I’m too good for you on it.

“Why, it’s Presley Thurman,” she said, reaching across the counter to hug me. “Of course, sweetheart, I always have fresh muffins.” 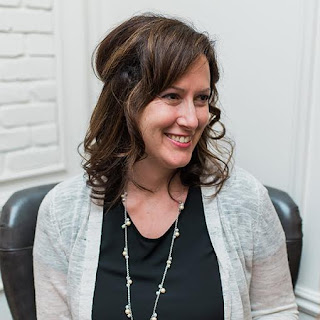 As a child Laina thought she would either be a truck driver (thanks to Jerry Reed in Smokey and the Bandit) or work at Taco Bell (her favorite restaurant as a child).
As she grew older she realized her talents lay in academics and business and for the last several years has been a business consultant and college professor where she uses the analytical side of her brain and not the side that makes up stories.

Through all her career choices she has continued to have a passion for writing. This stemmed from childhood whereas an only child she developed a vivid imagination spending most of her time making things up and thinking the Incredible Hulk lived in her closet.

Proud of her vast experiences in life from barrel racing to being on the dance team for a semi pro basketball team to being a mom of 2 amazing kids, she tells her family and friends that no one is safe from their escapades slipping in to her books.

Taking the plunge to write books (cozy mysteries and chick lit) that she actually let people read in 2010, she has worked her way up to being a real author, having 5 fans (maybe 6 now). Her blog, Writing is a Lifestyle, was launched to share the daily fun in the life of a Real Housewife of the Midwest along with the musing of other fabulous ladies. 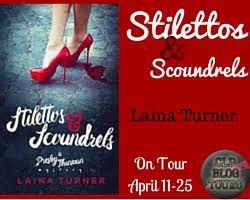 Welcome to my stop on the Virtual Tour, presented by CLP Blog Tours, for Stilettos & Scoundrels by Laina Turner.  Please leave a comment or question for Laina to let her know you stopped by.  My review will post soon – separately.    You may follow all of the stops on Laina's tour by clicking on the banner above.
Posted by Maria at Thursday, April 14, 2016